Chabrol's third film, À double tour, is the first in which he begins to find his métier of the psychological thriller. While it may lack the intensity of his later films, it is still a self-assured work that has worn well over the years. Looking at it once again upon learning of his death on September 12, 2010, I found it totally enjoyable. When it originally appeared in 1959, the film was compared extensively to Hitchcock, whose Vertigo appeared just the year before. Indeed, Chabrol's film even contains a mesmerist's wheel, which produces images similar to the whirling credits of Hitchcock's masterwork.

Chabrol's work, in retrospect, while sharing Hitchcock's fascination with psychological-driven acts of mayhem and murder, moves much more horizontally than Hitchcock's winding and spinning narrative. By film's end, À double tour turns into a fairly standard "who dunnit," as opposed to Vertigo's incorporation of an entire society in Madeleine's and Judy's deaths. In Hitchcock, murder is most often a societal act, a collaboration of several individuals and, often, authority itself; while in Chabrol it remains the province of the individual, or, in this example, an event within a family. The absolution from personal confession, so important to Chabrol's early film, has little significance to Hitchcock's work (with the exception, perhaps, of his I Confess of 1953).

Indeed the Marcoux estate near Aix-en-Provence, France, is, by and large, a private paradise, whose only "outsiders" consist of Roger, the milkman—sexually teased, along with the gardener, by Julie, the maid—and the Marcouxs' daughter Elisabeth's fiancée, Laszlo Kovacs (wonderfully brought to life by a young Jean-Paul Belmondo). Scandal is the worst fear of Marcoux's wife Thérèse (brilliantly acted by Madeleine Robinson), and her bourgeois values are ultimately shared with her daughter, son, and even, to a great extent, by her husband. 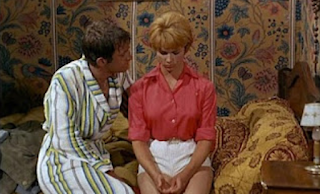 As the drama opens, however, we perceive her husband, egged on by his future son-in-law, is having some difficulty with family life, particularly since he is engaged in a not-so-quiet affair with a woman living in sight of his chateau, Leda (Antonella Luaidi). If the Marcoux house is all vertical, an upstairs/downstairs world of purposeful hierarchy, Leda's is a horizontal, Japanese-like construction, flooded with seemingly eternal daylight and a view of the Marcouxian "paradise."

Although the affair is the center of Marcoux and his wife's endless quarrels, they both delude themselves that their grown children know nothing of it, despite the fact that at table in the backyard Marcoux can be seen kissing his lover goodbye.

Life, nonetheless, might continue on as it is were it not for the rambunctious anarchist who insistently commands Marcoux to pack his bags and leave his wife behind and orders up full meals for his lip-smacking delectation from the flirtatious Julie. One of his first acts of the film is to undo his mother-in-law's knitting, forcing her to play a kind of Penelope before Odysseus' voyage has even begun. 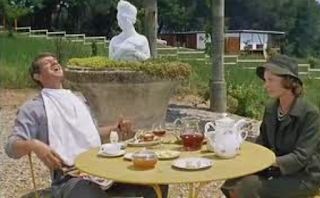 For a few moments Chabrol's film almost seems that it will take up a theme similar to Pasolini's Teorema as we glimpse that all in this family, save the harpy matriarch, are enamored by the intruder. The father and his daughter both speak of their love for him. And for a long period late in the movie, Laszlo stands with his arms draped over the shoulders of the uptight mother's boy, Richard (André Jocelyn), who seems quite at ease in the embrace until he self-consciously removes Laszlo's hand.

But the evil queen of this estate is vengeful, threatening, like a Fricka in full force, to do everything in her power to stop her husband from going through with his plans to leave; and, in her moralistic declarations and pleas, she requires her children to take sides. Accordingly, Elizabeth attempts to send her fiancée packing while Richard turns inward, attempting to calm his somewhat adolescent sexual confusions in his beloved music. Only Henri—who, like Julie "can't help but feel happy" (he is symbolically, if not literally, drugged by Leda as they cavort through a field of poppies)—seems to be able to make a break, and travels with Leda into town in order to create the scandal his wife so fears: "Leda and I want to be seen!"

As the family comes together for what may be their last supper, Laszlo ratchets up the unhappy family's hurts, until the dam breaks as Julie suddenly runs in to report that Leda has been found dead, murdered.

The police investigator quickly arrests the least obvious of suspects, the milkman, as the viewer can't help but feeling this is a huge mistake, and Laszlo, with the help of his uninvited dinner friend Vlado, becomes convinced that he knows who the real murderer is. Discovering the son Richard standing before what seems to be a funeral, while serenaded by the music of Berlioz, Laszlo wrestles him into a nearby pond, in a clearly homoerotic embrace, forcing him to admit Leda's murder. Richard claims he has committed the act for his mother's sake. Lazslo, offering him another kind of love, declares he will keep the secret within the family coven.

Thérèse, in what may be her most obviously evil speech of the film, demands the family cover up the truth, but Laszlo and Elizabeth urge Richard to tell the police what he has done, while Henri sits passively, destroyed by what he conceives as "beauty's" death. We realize that for him there will be no odyssey, no escape. 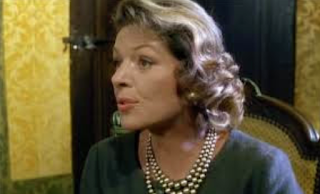 Gradually Richard perceives that he can never be freed of his mother unless he admits his crime, and marches off like a crippled Frankenstein to Leda's house. Madame Marcoux sits stoically, comprehending, as Laszlo has told her earlier, her "reign" is over.

One can only hope that Elizabeth and Laszlo may be able to transverse the worlds of their universe with the utter abandonment of youth, but at least Laszlo has broken the dam of the family pent up sexualities and emotions, offering, after all, like Pasolini’s vagrant angel, a kind of angelic peace.

Posted by greenintegerblog at 4:21 AM