Julie Gavras | La Faute a fidel! (Blame It on Fidel!) 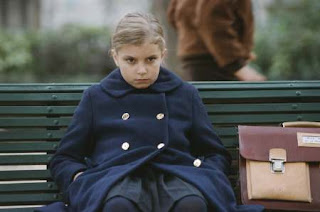 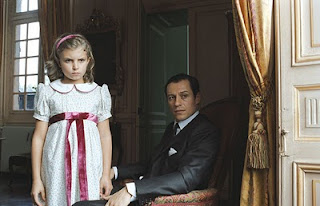 Nine-year-old Anna de la Mesa (Nina Kervel-Bey) lives a comfortable and pleasant life as the daughter of a wealthy Catholic bourgeois father and mother, Fernando and Marie, in France. She attends a parochial school where she is a good student, particularly in catechism. In her lovely and large home, she is cared for by a Cuban-born nanny, who gives her and her brother a bath each evening before serving her excellently cooked dinners, while blaming any evil she perceives on Fidel Castro.
When Anna’s aunt Marga and her cousin Pillar, political refugees from Franco’s Spain, come to live with them, however, everything begins to change. Fernando suddenly becomes more politicized, and, excited about the changes Salvador Allende has begun to make in Chile, he moves his family to a smaller apartment, determining to travel with his wife to that country to observe things first hand. Anna and her brother Benjamin are temporarily shuttled to their conservative grandparents, who own a vineyard in Bordeaux. Upon the parents’ return Marie begins a documentary on birth and abortion. The Cuban nanny is replaced by a Greek political refugee and then by a young woman from Vietnam. Soon their house is filled each night with barbudos, bearded Chilean activists, and each day with women describing to Marie and her tape recorder their distressed and abused lives. Anna is allowed to continue at her school, but is taken out of catechism. Outraged by her parents’ sudden transformation into communists, the young girl is now taunted by her parents' friends as being a “mummy,” the term for followers of the political right, and looked down upon, as well, by her conservative schoolmates. Like her Cuban nanny of the first scenes, she might well blame everything on Fidel, for Castro was, in fact, a major influence on Allende, and Allende, when his government was overthrown (in large part by the American government and its operatives), is reported to have killed himself with a rifle given to him by the Cuban dictator.
Although director Julie Gavras’ (daughter of the Greek filmmaker Costa-Gavras) sympathies obviously lie with the father and mother, her film tenderly portrays a young girl, who despite being somewhat deadened to the real world—who is a sort a living “mummy”—gradually comes to life as she overhears the horrible tales of the women and is slowly educated to “solidarity” through marches with her parents and their activist friends’ gentle explanations of sharing the wealth.
The young Anna, moreover, begins to see cracks in her own parents’ relationship. As her father celebrates Allende’s victory in the 1970 election, her mother publishes her book on women and childbirth, and Fernando becomes furious with her usurpation of his joy! The revolution, evidently, has not yet reached his sexual consciousness, and as the two lash out against one other, Anna takes the hand of her young brother and escapes to the streets. Upon her and her brother’s return home, her parents have realized, in their desperation over their children’s absence, the absurdity of their battle.
Meanwhile, Anna is taken by her father back to his childhood home in Spain for a visit. Without a single line of dialogue, Gavras reveals to both the daughter and audience the overwhelming layers of baroque sensibility—conveyed through the appearance of the house and the photograph books through which Anna leafs—that account for both the father’s earlier lack of political awareness and his recent conversion. He too has lived much of his life as a “mummy,” a man frozen in his own family’s past.
In the final scenes of this sensitive study of political change and its effects on the young, Anna determines to leave her Catholic school and to attend the French public school system. As she enters the new schoolyard, she stands now as a complete outsider, a young girl set apart from her new schoolmates and her own past. The camera creates almost a vertiginous feeling as it pulls back to reveal the games of the children while Anna stands in the center utterly alone. But suddenly a young circle of girls reaches out for her hand, and she joyfully accepts, embracing the solidarity of this new group. Politics, as Gavras reveals, does not lie only in the governing of countries, but in our every act, in the governing of one’s own life.

Los Angeles, October 8, 2007
(c) Copyright 2007 by the International Cinema Review and Douglas Messerli
Posted by greenintegerblog at 8:37 AM