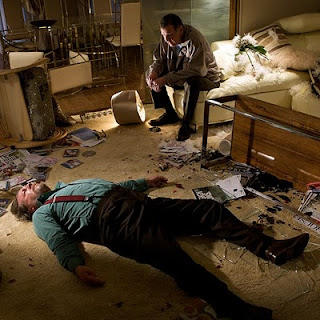 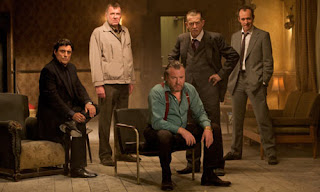 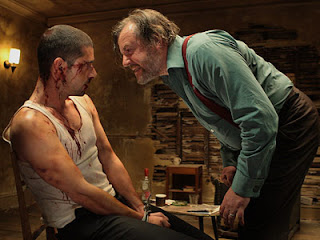 THE HEART WITHIN
by Douglas Messerli

44 Inch Chest is a revenge tragedy which gradually morphs into a dark comedy about marriage, love, and brutal masculinity. When Liz Diamond (Joanne Whalley) announces that, after twenty years of marriage, she has fallen in love with another man, her shocked and furious husband, Colin (Ray Winstone), after attacking his wife and wrecking his home, calls upon his four thuggish friends—Old Man Peanut (John Hurt), Meredith (Ian McShane), Archie (Tom Wilkinson), and Mal (Stephen Dillane)—to kidnap Liz's French "loverboy" (Melvill Poupaud) and slowly torture him to death. Two of them, the Old Man and Mal, would have slit his throat in a moment or, more probably, slowly pummeled the man to death. Meredith, a slightly sleazy gay gambler, would just as easily have killed the bastard, although in a more subtle manner. Archie, a man who still lives with his Mother, might have simply conked him over the head. But the decision of method in this perversely structured male masochistic gathering is up to the cuckolded husband, and Colin is so tortured and confused that one day later he has not yet accomplished the task.
As they gather again in a boarded-up flat, the four men, spouting more expletives and sexual stereotypes (the writers are the duo who cooked up the script of Sexy Beast) than David Mamet, Martin McDonagh, and Enda Walsh could have dreamed of, speak a language so obscene that their conversations, despite the invective and determined murderous intent, become comical and, at times, strangely poetic, as they mockingly repeat and alliterate their venomous outpourings—mostly in an attempt to pull their friend Colin out of sentimental and self-pitying funk.
The joys of this kind of theater—and this film is so theatrical that one keeps feeling it must have been adaption of a stage play—is the ensemble timing of the actors, working in joyful conjunction with one another as their characters, who come alive only in this malfunctioning male society, as they gradually reveal their hates and pleasures. Strangely, it takes Meredith, the gay man, to describe the beauty of Colin's wife; the others may lust after her, but have no ability to actually deal with the women they abuse. Meredith plays out the same pattern, in many ways, with his young men, using them only for sex, with no intention of getting to know who they might be inside their skin.
As we gradually come to realize, particularly when Meredith describes the man to himself, is that Colin is only one of the whole lot who can love. When they finally pull the prisoner out of the cell of a dilapidated armoire, it is as if masculine beauty has been brought out of the closet. Blood stained, a hood upon his head, the "loverboy" is still recognizable as a thin, muscular body as opposed to the flabby, red-faced, flat-assed figures about to destroy him. And we comprehend Liz's decision.
Colin demands time alone with the kid, and once the others have left the room, proceeds on a long rumination about love. At its core is a heart-felt, if unintended apologia about marriage, centering on the recognition that thousands and thousands of compromises and sacrifices must be made for any relationship to survive, most of them greeted with ignorance or, at most, a surprising pat on the bum by one's lover. But that "pat," as Colin makes clear, means everything.
Although Mellis' and Scinto's script creaks in this scene, at times nearly destroying the funny, pun-laden scorn of the previous sequences, there is still great poignancy in Winstone's delivery. He is a brute, yes, but inside his 44 inch chest lies a heart full of caring and tenderness.
The most notable failure in this long "aria"-like performance is the director's attempt to recreate the back story by taking us into filmic reality, outside the "set," which vents some of Colin's intensity. The more surreal scenes, imaginary encounters with Colin's wife and friends, are a bit more successful, but one wishes that they were even more absurd and unreal, distancing rather than familial, all of which might have worked better on a theater stage. Yet the scene is saved when, after the reality of his past comes crumbling down around him, Colin clings to the knee of his victim, while the boy gently caresses his head, a pietà that is nearly too painful to watch.
There will be no murder. Colin's love extends even beyond the boundaries of that love, helping his own wife leave him. Still bound and nearly naked, "loverboy" is sent off into the night, while the homophobic Old Man Peanut strolls off with Meredith to try out a gay bar. These monsters are, after all, just men.