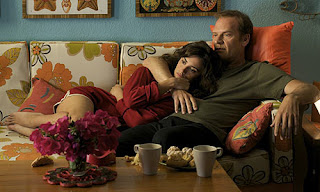 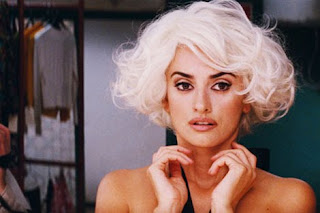 WITHOUT BLOOD
by Douglas Messerli

Pedro Almodóvar (writer and director) Los abrazos rotos (Broken Embraces) / 2009, released in the US in November 2009

For several years now I have followed the films of Pedro Almodóvar with great interest and, most often, enjoyment (see my review of his Volver in My Year 2007), but I've also been a bit dismayed, particularly with his last few films, with Almodóvar's subtle shifts to a more and more self-conscious and highly referential film-making that detracts from the raw, sexual, and farcical energy of his earlier works. This director still makes beautiful, watchable, and even engaging films, but their conscious attentiveness to the art of the film—something I admittedly sought out in some of his first movies—has somewhat drained the passion from his work.
Harry Caine (a name that calls up a series of Hollywood films from The Third Man [with its Harry Lime] to The Postman Always Rings Twice [based on a James M. Cain novel]) is a writer and ex-filmmaker, now blind, who works on scripts with the help of his handsome young assistant, Diego (Tamar Novas). Caine (original name Mateo Blanco, played by Lluis Homar) establishes from the very first scene, where he quickly beds a young woman who helped him find his way home from the streets, that he is obviously still a kind of lecherous lover, reiterated by the arrival of his agent Judit Garcia (Blanca Portillo), who oversees the young woman's departure with silent disdain. She has a new offer for him to write a script.
Diego and Caine, meanwhile toss out an idea of a new screenplay that Diego has imagined, a story about vampires who work in a blood bank, stealing the blood their customers provide without actually having to embrace them themselves for the necessary bite. Inevitably one vampire falls in love with one of the givers, and must resist the temptation to take the bloodletting to a new level. As the two joyfully toy with the story's erotic possibilities, we already suspect that the film ahead, although having nothing to do with Dona Sangre (Giving Blood)—will be more about temptation and resistance than all-out commitment.
Enter the mysterious Ray X (Rubén Ochandiano), another man who has determined to become someone else, who wants to do a film with Harry. Harry turns him down; but when the stranger leaves Harry asks Diego to open a drawer and leaf through a series of photographs to see if the visitor appears in any of them. Ray, so we soon discover, is the gay son of the wealthy industrialist Ernesto Martel (José Luis Gómez) who has died, so the papers announce, that very day.
Bit by bit the story is revealed of how Caine (then Blanco), backed by Martel, once directed a film "Girls and Suitcases" (a work that calls up Almodóvar's own 1988 film, Women on the Verge of a Nervous Breakdown)—a shift for Blanco from serious drama to farce. Searching for the correct actor for the starring role, Blanco-Caine finally decides on Martel's own mistress, who tired of being only a pampered lover, desires an acting career. Her photo-session, where Blanco dresses the mistress Lena (Penélope Cruz) alternatively as Audrey Hepburn and Marilyn Monroe, convinces him she is the right woman for his film, and, in the process, of course, he falls in love.
Martel, suspecting their affair, encourages his son to shoot a "filming-of-the-film" documentary, the sessions of which he reviews each night playing them over and over, while, with the help of a lip-reader, interpreting their secret communications. The gay son, the perverse use of film, the vengefully determined scorned lover all remind sophisticated filmgoers immediately of Michael Powell's Peeping Tom. The rest of the story, as Diego and Harry attempt to restore the earlier film and Judit and he reveal the full history of that film and Caine/Blanco's love affair with Lena, takes us down the road of a Douglas Sirk-like tearjerker employing, along the way, several Hitchcockian tropes as well as reminding us of Almodóvar's own All About My Mother. The tale ends, as one might suspect, with a series of startling events, including a purposeful accident (the car that hits the couple was driven by Martel's gay son) which kills Lena and blinds Blanco. A final admission by Judit, presumably hidden from Harry, is that Diego is his and her son.
Despite all of these highly emotional revelations, however, there is little real feeling evoked. The embraces, after all, have all been "broken" or were about to be, given Caine/Blanco's driven omnivorous sexuality. In his new identity Harry hides most of his past, even from himself. He lives, after all, primarily through his creations. And that is, it appears, Almodóvar's point: if this is a tale of passion, it is, as in Diego's and Harry's imaginary script, "bloodless."
While I truly enjoyed Almodóvar's concoction, his emphasis on his cinematic influences and his own film history ultimately break the embrace of the audience and director necessary to sweep us up into an ecstatic movie experience. As sensual as his characters and sets seem, they remain only celluloid and light, shadows.

Los Angeles, March 25, 2010
(c) Copyright 2010 by the International Cinema Review and Douglas Messerli
Posted by greenintegerblog at 8:01 AM