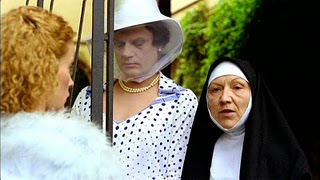 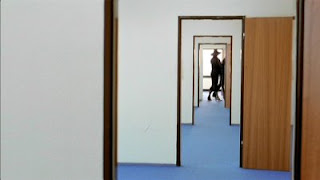 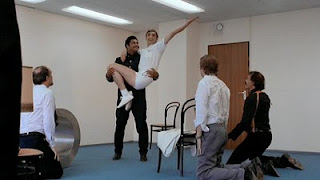 I found Fassbinder's In a Year with 13 Moons such an overwhelmingly rich film that it is hard to know where to begin. Perhaps the somewhat occult explanation at the beginning of the film, despite the fact that Fassbinder seems to negate it throughout, will help to explain the contradictory realities the film presents:

This claim, based on a conversation Fassbinder had with an astrologer shortly after the suicide of his lover, Armin Meier, in 1978, the same year of the movie and a lunar year with 13 moons—an event which occasioned the making of this remarkable picture—prepares us for the series of events which happen to Erwin/Elvira Weishaupt (stunningly performed by Volker Spengler).
As a young child, Erwin was given up by his mother to a Catholic orphanage, so we find out later in the film when he/she and his prostitute begin their quest to understand Elvira's problems; as a young boy the nuns were delighted with the shy and handsome Erwin and, ultimately, through the encouragement of the head nun, Sister Gudrun (played by Fassbiner's mother, Lilo Pempeit), a couple became interested in adopting him. But upon seeking legal permission from his mother, Sister Gudrun perceived that the mother had been legally married at the time of the adoption, and gave up the child without consulting her husband. Now the mother is terrified that her husband may find out about her actions—he is, evidently also a violent man—and will not agree to making it known. Accordingly, despite the love Erwin feels for his potential parents and they for him, the church cannot go forward with adoption, and the loving couple disappear from his life. The charming young boy turns into a lying, stealing teenager, unable to understand why he has been rejected.
Fassbinder's telling of this history, in which the family, state, and religion have unintentionally conspired to refuse him love, is not a thorough explanation of Erwin's condition, indeed, does not even psychologically explain most of Erwin/Elvira's later actions. His presentation of this information is less like a revelation, accordingly, than a kind of staged confession, in which the nun who tells the tale, moves back and forth across the garden as Erwin, now a female, Elvira, and her friend Die rote Zora (the Red Zora) stand in the foreground; and, even before the tale is completed, Elvira is seen to have collapsed. But it does help us to imagine the hero's strange confusion and desperation to be loved.
Indeed, throughout the quest through which Elvira journeys in this film, people reveal equally strange stories, myths, tales, and absurd fragments of information that when layered upon each other recreate the distressed and conflicted being at the film's core.
In the very first scene, we witness Erwin in an early-morning park, dressed not as Elvira, but as a man, so lonely, that he tries to pick up another man. As the love-making begins, however, the younger man discovers that Erwin is not a male "John," as he expected, but a woman, a being without a penis; disgusted, he shouts to his fellow workers to join him in punishment.

Having moved through life so impulsively and full of passionate need, all is now too late for the man without any remaining identity. He is not really a woman, not really a man, not even, quite, a transsexual or a transgendered being. Erwin/Elvira is no one—and yet is everyone who has ever needed love. One by one the people who might have offered him this gift, gather at this door, now guarded by the Cerberus-like chauffeur. Inside is Anton and Zora, evidently locked in when this hero returned to slit his/her wrists. No one in particular is guilty; yet everyone is obviously guilty for the death of the shell they now witness.