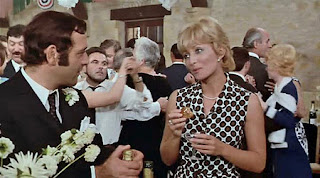 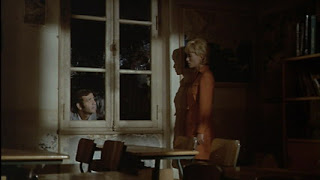 BEAUTY AND THE BEAST
by Douglas Messerli

Despite the statements of numerous critics that Chabrol's film Le boucher is filled with questions that are slowly answered over the course of the movie and, as Netflix's site quotes Adam Gai, "The audience is kept in suspense up until the last shot," I would argue that in this work Chabrol has created his most unthrilling thriller. For it is a work that has utterly no surprises, and because of that fact Chabrol is freed to show us film-making at its most abstract. We witness the process without having to be emotionally involved in plot.
Some of this lack of suspense occurs because, basically, there are only two characters in the film. The young married couple of the first scenes appear only briefly, despite the fact that the male is supposed to be a teacher in the same school where the central character, Helene Daville teaches. Although some of her students are more memorable than others, particularly the young man to whom she is trying to teach mathematics one late night, they are, nonetheless, as are the inhabitants of the small village near the Cougnac Caves where she lives, ancillary figures, unimportant to events. Even the mildly bothersome Police Inspector Grumbach offers little in the way of substance. Other than the beautiful and emotionally reserved Helene (Stéphane Audran) there is only her suitor, Popaul (Jean Yanne), a war-veteran who has just returned to his hometown to take up his father's business as a butcher.
From the earliest scenes in the film, we recognize Popaul as being facile with knives—at the wedding ceremony with which the film begins he insists upon slicing the large roast by himself—and early on we recognize that he has been embittered by the gruesome violence of his war experiences:

Popaul: I've seen a corpse or two—their heads in the wind, cut in half, mouth
open. I've seen three or four piled together. Kids with their eyes punctured.
Indo-Chinese as old as Madame Tirrant completely torn to bits. I've seen pals
of mine rotting in the sun, being eaten by maggots.

Were we to encounter Popaul today, I would guess that many of us might suggest he seek help from a psychiatrist.
Accordingly, despite his gentle demeanor with Helene, when word of a brutal murder reaches the village, we have no choice but suspect Popaul. There is literally no one else to suspect, and any "reader" of such a work knows that it would a ridiculous and absurd tale if the murderer was someone whom he had never met. It is as if Chabrol has taken the old whodunit story and emptied it of all save two figures, one of whom we cannot imagine as the murderer, and whom we know cannot have committed the second murder since she is on an outing with her students when she and they discover the body, its blood dripping from it, almost comically, upon a young girl's sandwich.
Chabrol takes this even further by having Helene discover at the scene of the crime a lighter (or one exactly like it) that she has given as a gift to Popaul. Since we know it must therefore be Popaul who has committed the two murders, any suspense of the film must depend less upon the discovery of the killer than the gradual discovery of who these two people are. It is their inner selves, not their grand actions that bring any meaning to the work.
Chabrol carries this idea of "no surprises" even further, comically commenting on it when, at the funeral of the second woman killed, Popaul, exiting the church, looks up at the rainy sky to say, "What a surprise!" Helene may have been surprised; she does not have an umbrella. But he and everyone else does, which they simultaneously open, recalling a similar scene from Hitchcock's Foreign Correspondent, a parallel to the earlier reference, with the discovery of the lighter, to Hitchcock's Strangers on the Train. No, it is no surprise that at such a sad occasion, rain should fall. And the natives have expected it.
What is surprising in this film is that Helene pockets the lighter without mentioning it to anyone. She is not only tampering with evidence but, by squirreling away the object, she is endangering her own life.
She has already spoken of the importance of Cro-Magnan man to her students, noting that if he had not brutally killed out of a need to survive that modern man would not be there today. We can only suspect, accordingly, that she sees her courtier-murderer, Popaul, as a necessary evil, someone who must do what he does in order to save the world, perhaps restoring the love she has relinquished.
Yet it makes no logical sense, and when she does encounter him that same evening, she is clearly terrified. Only when he produces a lighter exactly like the one she has found, can she again breathe easier, laughing behind her tears in relief.
If Popaul is psychologically disturbed, we now perceive that, in her inability to begin another relationship, she is psychologically scarred by her past as well. While she remains emotionally and sexually aloof from Popaul, she is also a kind a seductress, a woman seeking love despite her denial of it. As she quite straight-forwardly answers Popaul's challenge:

Popaul: But, shit, if I kissed you now, what would you say?
Helene: I'd say nothing, but please don't.

In short, she will not out rightly reject love were it to make its demands; she is simply attempting to protect herself so that love will make no demands. She is, in other words, a passive being; unlike Popaul, who makes things happen, who brings her food, fixes her lights, paints her rooms, who, in fact, admits that he wants to "look after her," Helene can do nothing but exist, glowing in her beauty much like the light(er) she gives him. It is no accident that she provides the fire for the cut of meat his has brought her.
Only when Popaul discovers the hidden lighter, and, perceiving suddenly that she has found him out, steals it back, does Helene accept the reality that we have known all along. And it is only then that she can begin to function for herself, madly racing from door to door to lock herself away from the beast calling out. It is at that moment also when we perceive that Chabrol's tale is not that of a murderer on the loose, but a kind of fable like Beauty and the Beast.
It is not her murder he seeks, but out of embarrassment for being the beast, ritual death. Even his sudden plunge of his knife into his own belly is not a surprise as much as an inevitability. It is only now that Helene can truly come into her own, reaching out to save him, to protect him from himself, just as she has mothered her students.
This time she allows him the kiss, but it is the kiss of death, too late to redeem the animal within.