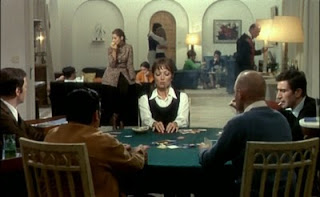 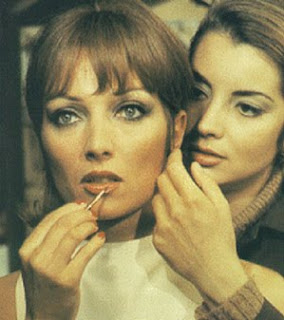 Claude Chabrol’s Les Biches—which I choose to call The Girls instead of Bad Girls (which the original American distributor titled it) or The Does (as it later came to be known)—is less a psycho-sexual murder tale, as many critics have described it, than a kind of gay black comedy in the manner of theater writers such as Joe Orton, particularly in Entertaining Mr. Sloane (produced in London four years earlier) or Pinter’s early 1960s works. In fact, the murder occurs almost as an afterthought, in an epilogue, and one gets a strong sense that, had one or another of the women involved behaved ever so differently, it might not even have occurred. The murderer’s name, Why (a nickname awarded her by her friend Frédérique [Stéphane Audran] when she refuses to divulge her real name and questions Frédérique’s need to know) echoes with the mysteriousness of the act, as if the character and the director himself cannot answer for her behavior.
Chabrol’s film is almost purposely vague about not only this issue, but all the relationships between all the characters involved. The beautiful, but slightly awkward Why (Jacqueline Sassard)—as one of the campy gays inhabiting Frédérique’s Riviera house, declares, she is beautiful, but I’m not sure of her “buttocks”—is picked up off the street, where she survives by chalking out pictures of does, by the wealthy lesbian. At least Frédérique appears to be a lesbian, gradually drawing her new friend into her house and bathtub. The willful Why, in turn, rejects and accepts this love in alternative waves of indecision. It is clear she is drawn to the well-heeled woman, but we are not sure whether it is an issue of sexuality or of financial security, which the grainy texture of the cinematographer’s Paris sky reiterates, as if everything is seen through a glass darkly.
Once the couple reach Southern France, the sky seems to clear up a bit, but the situation becomes even a bit more confusing. Who are these strange beings inhabiting the house, and—once again, the questions dominates the scene—why? We might postulate they are there simply there to entertain the slightly bored heiress—their actions throughout define the concept of "camp" humor—but we cannot be certain of their roles, nor we can comprehend their relationship with the persistently angry cook. For however hard we might try to explain anything, we grasp that what may seem intensely serious is merely an absurdity, as if very attempt to glimpse "the real" takes us further from any truth. As the only outwardly “straight” figure of this drama later admits, Nothing surprises me in this house. Nothing!”
“Whether or not they have sex, we soon perceive a physical attraction between these two women, but the moment we tangibly sense it, all is challenged by the arrival of a handsome unknown guest, Paul Thomas (Jean-Louis Trintignant), who in the midst of playing a poker game with Frédérique, her two gay friends, and others, cannot help but stare at Why. As he leaves soon after, Why follows, with a ridiculous pretension of going for a walk, the ever vigilant and suspicious Frédérique sending Robéque and his friend to tail them.

The very fact that she is being followed may help explain Why’s actions, her intentional reencounter with Paul and their presumed sexual relationship after. As she has shown herself again and again, Why is as determined to challenge and to engage her new lover/mother, to ask questions. Once again it is not certain whether she is seeking a relationship with Paul or trying to explain his attraction to her, an attraction not unlike the meeting between the two women.

It may be hard to perceive the handsome architect, who creates look-alike villas for the Riviera beach, as a man-eating monster or cruel figure out of Perrault’s fairy tales, but in many senses Why is right in her evaluation. Paul will “eat up”—or to put it nicer—will “take up” nearly any attractive woman. Even he admits that had he developed a further relationship with Why he would have abandoned her in a few months. And it comes as no surprise—on both sides—that the socially and financially powerful Frédérique will take her revenge on Why by developing a relationship with Paul, and that Paul, in turn, because of her wealth will reciprocate. Within a week the two have become a seemingly permanent couple, leaving Why not only without an answer, but without either male and female lover, or, if we want to go further down the Freudian road, without a father or mother.
Robéque, his friend, and the angry cook, moreover, cannot bear the presence of this interloper, all of them certain that Paul is taking advantage of Frédérique, that he is, indeed, an ogre. Yet gradually, we begin to perceive that in Why’s long silences and languor (she spends much of the film in bed with headaches or lying languorously in the grass) she is plotting her own revenge. But even that is uncertain; perhaps she is just passively accepting the situation, attempting to find an entry, like Carson McCuller’s adolescent girl, as a “member of the wedding.”
Chabrol has great fun with our confusions, and when all diners spit out the “doctored” soup at dinner, we might imagine that the act could have been committed by almost anyone form the cook, Frédérique’s gay comics, Why, or even Paul. Certainly Why and Paul most benefit from the result, Frédérique’s casting out of Robéque and his lover from this inverted Eden. And although Paul admits to feeling “rather guilty” about their ouster, Why reaps the true benefit of the absence of their prying eyes. In what must surely be one of the most brilliantly subtle and sensuous threesomes ever put to screen, Why slowing weaves her hands and legs between the two lovers, Paul and Frédérique, culminating in her voyeuristic witnessing of their sex through a keyhole.
Clearly in revenge of the night before, Frédérique announces in a brief epistle that the couple have decamped to Paris, seemingly leaving the house in perpetuity—despite her assurances that they will return two or three days—to Why. As Why, caught with her hands upon Frédérique’s money stash, admits to Paul earlier on: “She lends me things.”
But now, suddenly packing her bags and announcing she will never return, Why transforms from a passive and obedient sufferer into a forceful woman. Recalling Why’s fascination with a knife hung upon the wall earlier on, we suspect that the two escaped lovers or hypocritical frauds, whatever they might be, are about to face the ogre, the man-eating monster Why. The only question that remains is if Frédérique was her intended victim or Paul, at film’s end hurriedly on his way to the apartment; and what will he find there, a woman filled with lust or vengence.