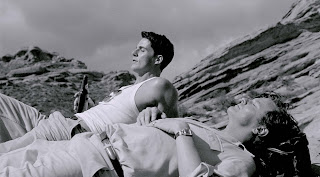 MOMENT OF CLARITY
by Douglas Messerli

Tom Ford and David Scearce (screenplay), based on a novel by Christopher Ishwerwood, Tom Ford (director) A Single Man / 2009

Tom Ford's first feature film, A Single Man is a beautiful and intentionally serious work, presenting the last day in a Literature Professor's life. George Falconer (brilliantly played by Colin Firth) is a gay man who has lost his lover, Jim (Matthew Goode), in an accident, and has since that time lost himself to grief, stumbling through the early 1960s society (the Cuban Missile Crisis of October 1962 is played in the background a of couple of times during the film's action) like a dead man walking, unable to connect with his neighbors—the Strunks, with three somewhat obnoxious children—with his students—to whom he attempts to teach Aldous Huxley's novel After Many a Summer Dies a Swan, a book, appropriately about death and longevity—or reconnect with his close woman friend, Charley (Julianne Moore). It is a time when being gay, particularly for a careful and slightly fastidious man like George, is not openly shared; and after having had sixteen apparently happy years with his companion, he is quite frankly all alone in life, a man who at times feels truly singular, if not entirely "single."

To increase the drama of his film version of Isherwood's 1964 novel, Ford has slightly altered the plot so that on this particular day, the day we follow his actions from waking up until his death, George has determined that he will kill himself, ending his utter loneliness and, as he wryly describes his New Year's resolution to Charley, to put to rest the things of the past.
One of the important elements of Isherwood's fiction was, that despite his homosexuality, George was, in fact, an average person, an intelligent ordinary man, whose loss of love had simply led to a great emptiness. And Ford, given the strength of Firth's performance, also attempts to capture that ordinariness. Everything George does during the day, with a couple of exceptions, is set to pattern. As he drives past the play-gun of the neighborhood boy, he cocks his finger and shoots back, he briefly drinks coffee in the faculty lounge before facing this disinterested students, he shops for a bottle of gin Charley has begged him to bring to her party that night, he visits the local bank.
The trouble is that Ford has so beautifully and precisely framed these events, carefully dressing his characters and sets, stunningly lighting his stylish designs, and choosing some of the most beautiful people to portray his odd assortment of figures that he renders George's great angst nearly meaningless. Accordingly, it is hard for the audience to share that character's state of mind.
Yes, George's great love of life has disappeared, the homophobia of the period underlining his lover's death: he is secretly called by a family friend who reports Jim's death, telling him, in no uncertain terms, that the funeral will be a family-only affair, disinviting the most loved "family" member of the deceased. In her attempt to woo him back (Charley and George once had a temporary fling), Charley reveals the sensibility of the time, characterizing George's and Jim's shared life as "not a real relationship." We certainly understand his isolation with regard to the society of the day. As a gay man, as Jim proclaims, and later, as his student reminds him, George is "invisible."
Yet George lives in one of the most beautifully moderne houses possible, all windows and sleek lines. He dresses in well-designed suits. He is helped in his daily chores by a maid. He works only a few hours a day teaching the literature that he, if not his students, most loves. He is adored by his friend Charley, who lives only a few houses away. He drives a Mercedes.

On the day of his intended suicide, moreover, his student, the radiantly fresh Kenny (played by the photogenic Nicholas Hoult) openly flirts with him. A stunningly handsome Spanish James Dean look-a-like (played by eye-catching model Jon Kortajarena) is ready to jump into his car and bed if he wants. And then there's the sky, the glorious sunset over the city of Los Angeles! We are told, of course, that sometimes the most beautiful things are dangerous; that incredible sunset, after all, is a product of pollution, while in the background is a poster for Hitchcock's Psycho. George is apparently in danger, despite all these lovely trappings.
Yet it is hard to completely square Ford's carefully choreographed picturesque sets with the despair George seems ready to embrace. Were it not for Firth's intense commitment to the role, we might break out laughing, as the audience almost does—this humor intentionally sought—when George tries to find a comfortable spot and position in which to shoot himself in the mouth. Fortunately, after thrashing about like a just-caught fish in a sleeping blanket, he fails to find the level of comfort necessary for the act.
After a lovely dinner and intense argument with Charley, George returns home, now more than ever determined to end it; but he still cannot get up the courage. Out of liquor, he runs to the local bar, a kind of gay-straight joint on the nearby beach, wherein awaits his student Kenny.
The two now attempt a game of trying to find just how far the other will go, until they discover themselves swimming naked in the ocean and return home to George's intended house of horrors. Despite the sexual overtones, or even "overtures," no actual sex occurs as George, exhausted by his games, falls asleep after nights of lying awake. He awakens to find Kenny asleep in the other room, guarding the discovered handgun within his blankets to protect the older man. George steals it away from the sleeping angel, locking it up.
Suddenly, he has come through, as D. H. Lawrence might have put it, he has reconnected with a person (an action which Ford heavy-handedly reiterates time again throughout the film by transforming the color of George's skin from gray to a warm yellow-brown whenever he makes close human contact), bringing him a moment of clarity. As George opens the patio door to look at the stars, an owl flies up. Abandoning wisdom and its attendant reservations, George has been redeemed and saved.
But life is not like the movies, particularly not Ford's near-perfect universe; as George returns with his newfound happiness to his bedroom, he falls dead of a heart attack, an irony that almost redeems the film itself.