Ethan and Joel Coen | No Country for Old Men 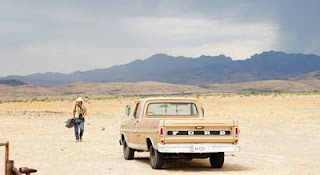 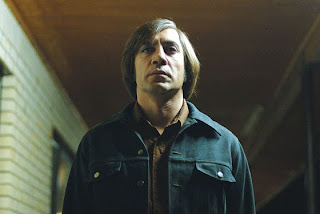 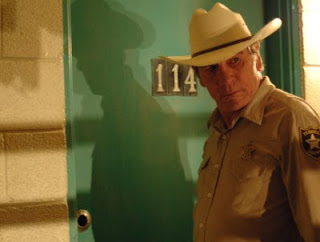 When the film No Country for Old Men first appeared at our local theater, I resisted the movie, in part because it was written and directed by Joel and Ethan Coen. There is no question of the great talents of this filmmaking duo, but in too many of their films over the years they have seemed to me to waste their substantial energies on flat satires of the most obvious limitations of American society and in meaningless presentations of violently dark visions that portend more than they deliver. Not only do the Coens unnecessarily demean the cookie-cut figures they have created but they toy with their audiences as well. It’s simply painful to me that in a work as substantial as Barton Fink, for example, we are left only with an old suitcase which may or may not hold any significance for the characters or viewers. Like some other disaffected writers and directors of today, they raise important questions without having any intention of seeking out answers. It’s not that I might expect a definitive answer to the contemporary dilemmas, but I do demand that an artist truly attempt to discover if there might be one.
In many respects, the original author of No Country for Old Men, Cormac McCarthy, and the Coens are a perfect match. McCarthy’s laconic, modern cowboys are faced with all the bleak violence that attracts the brothers; yet McCarthy’s figures standout in their dogged determination to track down or at least wait out the evil forces in opposition to both quick solutions or abandonment of the search. Sheriff Ed Tom Bell (played by Tommy Lee Jones) is just such a figure. A seasoned veteran of the violently unruly Western landscape over which he presides, Bell has become a sort of laidback comedian to the dark reality he must daily encounter, a country that eats up not only the agéd, the fearful, and the frail, but anyone who even accidently encounters the evil forces at work. McCarthy—with the Coens following his lead—turns several western tropes on their head: about to enter a room where they suspect a dangerous criminal might be hiding, Bell’s deputy sheriff asks, “We goin’ in?”

Ed Tom Bell: Gun out and up.
Wendell: [Wendell draws his pistol] What about yours?
Ed Tom Bell: I’m hidin’ behind you.

As the camera pans across the beautiful but desolate landscape at the beginning of the film, Bell tells of the old country sheriffs, some of whom survived for years without even shooting their guns.
The story this movie relates, moreover, is filled with such powerful weapons of destruction that one might as well not raise a gun in defense. It is certainly the lesson which, too late, Llewelyn Moss (played by Josh Brolin) discovers. His entry into this godforsaken evil world begins with a rifle as he aims, shoots at, and misses a deer. Following the wounded deer, Moss accidentally comes upon a grouping of trucks surrounded by bodies of both men and dogs; two of the trucks also contain shot-up men, one still in the process of dying. Moss readily perceives that he has encountered the remains of a drug deal gone bad, and goes in search of the missing “last man standing,” whom he encounters, propped up against a tree, also now dead, a suitcase filled with money by his side. Moss is savvy enough to recognize what he has uncovered, but too stupid to realize that he cannot successfully take the gamble with which he is faced. Not only does he carry guns and money home to his maltreated and unsuspecting wife, but after tossing and turning in his bed out of the guilt for leaving the man to die, he pointlessly returns to the killing field, thus assuring the forces of evil will know of his involvement.
The Coens and McCarthy present a number of evil gatherings, each at war with one another. But no group can outdo the whirling dervish of evil, Anton Chigurh (brilliantly played by Javier Bardem). It hardly matters which of the various groupings Chigurh works for because, ultimately, as he quickly kills off those with whom he meets, we recognize that he is working only for himself. When an executive hiring another hitman, Carson Wells, to get rid of Chigurh, asks, “Just how dangerous is he?, Wells responds, “Compared to what? The bubonic plague?”
Throughout much of the movie we simply watch the carnage as Chigurh moves forward in space. But even in his endless spree of killings, we recognize Chigurh as some-thing different from what some would describe as a simple psychopath. Somewhat nattily attired, particularly attentive to the condition of his boots, and coiffed in a carefully combed hairdo, Chigurh's exterior hides a man who is mad, but is the devil incarnate. When he does not simply kill those with whom he comes in contact, he toys with them, offering them a chance that they do not even recognize to escape his plans for their deaths. One of the most riveting scenes in the movie is Chigurh’s terrifying encounter with a gas station proprietor, in which the murderer not only questions the meaning of every word coming from the proprietor’s mouth, but challenges him to a coin toss that will end in his death or salvation:
Anton Chigurh: What’s the most you ever lost on a coin toss?
Gas Station Proprietor: Sir?
Anton Chigurh: The most. You ever lost. On a coin toss.
Gas Station Proprietor: I don’t know. I couldn’t say.
[Chigurh flips a quarter from the change on the counter and covers it with his hand.]
Anton Chigurh: Call it.
Gas Station Proprietor: Call it?
Anton Chigurh: Yes.
Gas Station Proprietor: For what?
Anton Chigurh: Just call it.
Gas Station Proprietor: Well, we need to know what we’re calling it for here.
Anton Chigurh: You need to call it. I can’t call it for you. It wouldn’t be fair.
Gas Station Proprietor: I didn’t put nothin’ up.
Anton Chigurh: Yes, you did. You’ve been putting it up your whole life you
Just didn’t know it. You know what date is on this coin?
Gas Station Proprietor: No.
Anton Chigurh: 1958. It’s been traveling twenty-two years to get here. And
now it’s here. And it’s either heads or tails. And you have to say. Call it.
Gas Station Proprietor: Look, I need to know what I stand to win.
Anton Chigurh: Everything.
Gas Station Proprietor: How’s that?
Anton Chigurh: You stand to win everything. Call it.
Gas Station Proprietor: Alright. Heads then.
[Chigurh removes his hand, revealing the coin is indeed heads.]
Anton Chigurh: Well done.

Moss also has taken a bet, a gamble that armed simply with his rifle, he can outrun the forces trying to destroy him. But Chigurh and the others have stacked the deck, placing a small homing device in the center of the money stacks which leads Chigurh to Moss’s hideout. Moss discovers the device at the very moment that Chigurh appears at his hotel door.
That he temporarily escapes, we recognize, does not matter. For there is no real escape from a man who, when wounded, injects himself with a painkiller and blithely pulls the bullet from his leg. What Moss has done is simply involve other figures, including his innocent wife and her mother, in this horrific dance with death. The law is always three steps behind the devil, while those who meet him face to face, as Carson Wells recognizes, will inevitably end up in a coffin.
All of this might have seemed like McCarthy’s bleak portrait of the end of the world in The Road if it weren’t for the fact that, even if they are ultimately ineffectual, people such as Sheriff Bell continue their pursuit. In this sense, they deny what they themselves know to be coming: their own fates. Even when all the bodies have seemingly been neatly stacked, Chigurh has one final murder to commit: Carla Jean Moss, Llewelyn’s wife, whom he has promised to reprieve if Moss delivers up the money. Since Moss has chosen to ignore him, Chigurh—with his perverse sense of honor—now feels compelled to destroy the last survivor.
Finding the killer in her bedroom as she returns from her mother’s funeral, Carla Jean repeats the phrase others use throughout the movie: “You don’t have to do this,” a concept which Chigurh immediately dismisses. But when he offers the woman the same throw of the coin he has offered the gas station proprietor, she refuses, facing the murderer on her own terms. For the first time in this murderous game of chance, someone calls his bluff. The Coens brilliantly tease us, as Chigurh soon after leaves the house. We have heard no gun; yet as Chigurh raises his beloved boots to check if they have been splattered by his victim’s blood, we recognize he has given her no out.
At the very end of this powerful fable, Sheriff Bell recounts a dream to his wife where, as he travels through the cold and dark mountains, he witnesses his father ride past him, a blanket wrapped around him, his head down, carrying fire in a horn. “And in the dream I knew that he was goin’ on ahead and that he was fixin’ to make a fire somewhere out there in all that dark and all that cold, and I knew that whenever I got there he would be there. Out there up ahead.”
Of course the cold into which Bell’s father precedes him is death. But the fire he prepares also represents his actions in life. The only possible escape from the surrounding evil lies in the hands of those who take responsibility, who, denying fate or chance, know that things are what you make them, not simply how they happen.