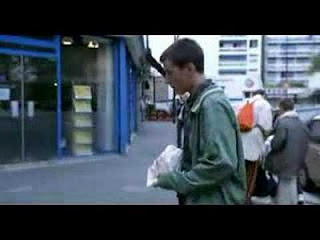 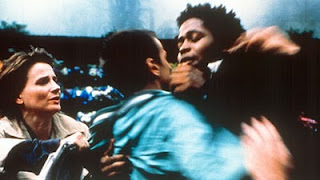 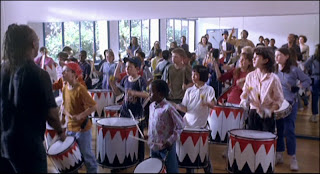 Code Unknown begins with a sense of urgency and trauma which grows and grows throughout the film until the final scene, resulting in a disconnect with almost all the film’s figures.

As she leaves a building, Anne Laurent (Juliette Binoche) is hailed by her boyfriend’s young brother, Jean (Alexandre Hamidi), a disaffected boy who announces that he has just left his home on the farm. He’s come to Paris, evidently, to speak with his brother, Georges, hoping for help in his escape from his hard and uneventful life.

Georges (Thierry Neuvic), Anne reports, is in Kosovo where he has been sent to photograph the war. She, an actress, has an appointment; she has no choice but to share her building code with him so that Jean has someplace to stay the night. She quickly stops into a small store to buy a couple of pastries, knowing that the boy must be hungry, before they part.

No sooner than she is out of sight, Jean, having finished his sweet, rolls up the wrapper and tosses it into the lap of a older woman begging on the street. The rude behavior is witnessed by a young teacher from Mali, Amadou (Ona Lu Yenke), who grabs the youth and demands he apologize to the beggar, a Romanian woman encamped in front of a posh store. A street scuffle ensues and a small crowd gathers around them, as Jean attempts to escape. Some have seen his actions, but when Amadou and others try to explain the situation to the arriving police, they release Jean and arrest both Amadou and the Romanian woman.

Amadou’s arrest horrifies his parents, an over-worked taxi driving father, and a caring mother who we witness telling her tale of woe, along with a torrent of tears, to a Malian aminate. This is, evidently, not the first time he has gotten into trouble. Maria, the Romanian woman is escorted to a plane and forced, as an illegal immigrant, to leave the country.

In short, through a simple ball of paper tossed away in anger, an entire series of unfortunate events ricochet, effecting all those around them, setting the tone to a film in which each of the figures grow more isolated.

Similarly, the director isolates these events through his presentation of the film’s scenes, as if he has dropped in to each household for a few minutes, scanning the figures briefly before moving on to others, signified with a black-out. Through this process, Haneke forces us to connect these dissociated fragments in order to evaluate his shadowy characters and to comprehend their problems in the context of the larger difficulties facing the society as a whole.

Some, like Jean’s farmer father, to whom Jean temporarily returns, seem to have been already isolated before this primary event. With his wife dead, he sits basically in a brooding silence. Although it is clear that he loves his son, at one point bringing him home a motorcycle as a gift, with the heavy chores, early hours, and other taxing conditions of his life, he has no way to help his son adjust. By film's end, Jean has left the farm again, none of his family knowing where he has gone.

Similarly, when Georges returns from his photographic assignment where he has clearly witnessed the terrors of the horrifying Balkan struggles, he seems relatively unaffected and is criticized both by another friend and Anne of lacking empathy and feeling for his fellow beings.
Others such as Anne, Amadou, and Maria seem to have too much feeling, involving themselves in situations in which they are unable to significantly help, opening them to abuse. Anne plays just such a figure in the film on which she is currently at work, a thriller in which she portrays a woman touring an apartment where she is suddenly lured into a “music room” and threatened with her life. This terrible scene—in which the would-be murderer reports that he wants to watch her die—since we do not yet know that she is an actress, appears at first as if it might be a “real” event. The threat that gas will soon be filling the room, moreover, echoes with the deaths of millions of such women in the Nazi concentration camps.

Amadou, who desperately wants to be become assimilated into French culture, feels racially slighted and abused at nearly every turn. He works with deaf children, who have clearly their own problems with their own sense of being cut off from the world.

Maria, who was almost catatonic in Paris, comes alive as a grandmother and neighbor back in her native Romanian city. Yet the poverty and drabness of her life there clearly makes one comprehend why she may wish to escape her country again.

The breaking point for Anne comes when she is accosted by a young Algerian boy on the subway, as he sexually toys with her, venting his own sense of anger and dissociation from the dominant and, in his mind, wealthy society in which he exists. The most frightening aspect of this assault is that the other riders look away, pretending as if the event were not occurring. Only one rider attempts to help.

Accompanied in the soundtrack by the heavy drumming of a performance of Amadou’s deaf children, Anne returns home after her ordeal. Soon after, Georges is about to join her, but finds the code to her apartment no longer works. A telephone call from across the street clearly results in no answer. Anne, too, has apparently recognized the failure of their relationship and their lack of true kinship. But in refusing him, she also has removed herself from the active loving and caring she, along with Amadou and Maria, have formerly committed to. We cannot but be fearful that if things do not change—if the codes of society are not resolved—the young Malian teacher and the older Romanian woman may ultimately close themselves off from others as well.