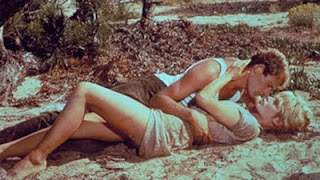 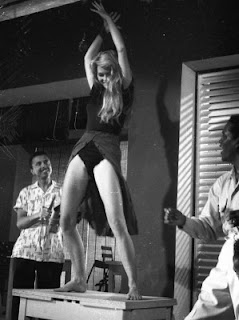 A FEVER
by Douglas Messerli

I was 10 years old when this Bardot film was released in the US, and, quite obviously, would not have been permitted to attend. Yet I knew that this film was "dirty," a movie about sex! Although he most certainly would not have seen it, my father must have said something about it. Or perhaps I had read in the newspaper how "naughty" it was. Today "naughty" doesn't sound as dangerous as it did in 1957.

I never did see a Bardot film, not even as an adult, until I recently decided to discover what the furor of my childhood had been all about. By today's standards Bardot's films might almost be described as discreet. Certainly, in the Criterion version of ...And God Created Woman, nudity is only intimated, never shown, and the film might today receive a PG-13 rating. But Bardot's sexuality is at the center of this work.

I've read a few years ago that after her retirement Bardot became, like Doris Day, an animal rights advocate, that is when she's not busy hating human beings, having spoken out against intermarriage, immigration, some aspects of homosexuality, and Islam in general.

But in 1957 she was the rage among thousands of sexually desperate men, and Roger Vadim's small movie, ...And God Created Woman became a international success and made his wife, Bardot, a star. The period was an era dominated by feminine sex objects, the American Marilyn Monroe representing one the most notorious of such figures. Strangely, however, Monroe's roles generally showed her as sexless and clueless. She liked Tom Ewell in The Seven Year Itch because he was married, and would prove no sexual threat. In How to Marry a Millionaire, where for vanities' sake she refuses to wear her glasses, she cannot even see the men who woo her.

Bardot's sexuality, on the other hand, was an open book, and although several male characters throughout this film chauvinistically describe her as a man killer, what some movie blurbs might describe as a "tempting and teasing vixen," in her role as Juliete Hardy she is a totally honest waif. As she reports throughout the film, she cannot lie; it is the men around her that lie to her and themselves. And despite her reputation as a "slut," a phrase her adopted mother throws at her again and again, she actually loves only one man, Antoine Tardieu, who early in the film, upon returning from Toulon to St. Tropez, gets her to agree to run away with him. In the bathroom, however, she overhears him talking about how he intends to seduce and leave her in the lurch.

This eighteen-year-old girl, with a beautiful body and a mane of crimson blonde hair, is simply a young sensual woman in love with life. She loves food, the feel of things (she goes about barefoot as often as she can), music, dancing, and sex. It is the adults around her who twist and turn these into transgressive acts. Bardot as Juliete approaches her world as would a cat, brushing up against nearly every being and object with the purring joy of physicality. But she has already learned that such naturalness results in tormenting complications.

Accordingly, Juliete, the potential lover in this film of not only of her Romeo, but of every male in the town, has armed herself with a intense silence and wit. The film begins with Bardot sunbathing in the nude behind sheets hung upon a clothesline. The financial tycoon Eric Carradine (Curd Jürgens), seeking a sexual liaison, has come pay her a visit: Eric Carradine: Ah: The Garden of Eden in Saint-Tropez! Juliette Hardy: Monsieur Carradine! And I suppose you are the Devil? Eric Carradine: Perhaps so. I've brought the apple anyway. Despite the temptations he offers her, a small toy car to represent a real one he is willing to give her if she joins him, Juliete does not consent. Yet her mother damns her as if she has given in to the devil, threatening her with a "surprise," which later, we discover, is a return to the orphanage from which she has been plucked.

Later, as she meets another wealthy man, equally determined to bed her on Carradine's boat, we witness another of her brilliantly witty retorts. M. Vigier-Lefrance: have you heard of shoes by Vigier? Juliete Hardy: Yes. M. Vigier-Lefranc: That's me. And you must have heard of Lefranc's refrigerators? Juliete Hardy: Yes. M. Vigier-Lefranc: That's me too. Would you like to dance a cha-cha-cha? Juliete Hardy: I never dance with a vacuum cleaner! Vadim's film is weak on plot, which mostly centers upon Carradine's determination to buy a small boat yard owned by Antoine Tardieu, his two brothers, and mother. Antoine rejects the offer, returning to Toulon, leaving town, as he had boasted, without Juliette. This, in turn, results in a series of disastrous events that nearly destroy the young woman at its center, including Juliete's marriage to Antoine's younger and guileless brother, Michel (Jean-LouisTrintignant), even though she warns him that the marriage will destroy his love.

Later, when Carradine queries her about why the brothers will not sell their puny operation for the millions of francs he is offering, Juliete reveals her intelligence: "Perhaps they do not want to lose a place where they can work." Even the sleazy Carradine must praise her insight. Offering Antoine and his family jobs running his major shipyard, Carradine is freed to build his casino, as the Tardieus acquiesce.

Yet bringing Antoine back into Juliete's life, we realize, can only lead to the inevitable. And when the intercourse does occur, we recognize it almost as a rape. For given her sensual response to life, Juliete cannot resist what Antoine might have; for her it is, as she puts it, a fever. But, of course, it is she who is castigated and forced out of the house.

But even then, she cannot and will not abandon her behavior, and, in this respect, one does have to agree with Simone de Beauvoir's essay, "The Lolita Syndrome," wherein she argues that Bardot was a "locomotive of women's history," liberating women long before the liberation movement. For Juliete, despite her wit and intelligence, has only one tool at her disposal, her body, to allow her the freedom she wants.

The film ends with Juliete dancing, somewhat frenziedly, to a jazz group practicing in a small bar. Michel comes to seek vengeance for her sexual digressions. Pulling a gun from his pocket, he appears ready to kill her, until Carradine arrives on the scene, telling him the obvious—"Can't you see that it's you she loves?" His shot hits Carradine instead, and as Antoine drives off with Carradine to find a surgeon, Michel lovingly takes Juliete home again, making it clear he will accept her as she is without forcing her to become a normative housewife.

If, as one suspects, that Vadim set out to produce simply a vehicle to reveal his wife's sexual charms, his ambitions pushed him in quite another direction. For although there is a dark sexist view of women underlying the entire effort, Bardot herself takes it elsewhere for those not frozen in bourgeois prescriptions of moral behavior.

Copyright (c) 2011 by International Cinema Review and Douglas Messerli.
Posted by greenintegerblog at 7:46 AM