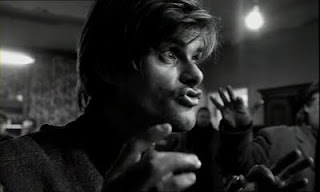 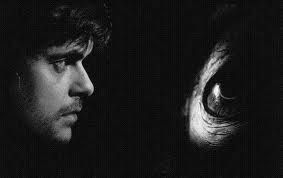 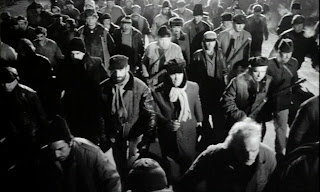 Released in 2000 for the Toronto and Chicago International Film Festivals, Béla Tarr's masterful Werckmeister Harmonies appeared (at least on US soil) the same year as the English language translation of Krasnahorkai's book upon which it was based, The Melancholy of Resistance (reviewed on my Exploringfictions site.

Although the author was very much involved with the film version, serving as the co-writer of the screenplay, Tarr has made, at least to my imagination, a very different work from the dark, broodingly metaphysical fiction. The film begins with one of the best scenes of all of literature, the appearance of János Valuska, who proceeds to take the drunken patrons of the soon-to-be-closed bar through the galactic patterns of a solar eclipse. Valuska, who plods throughout both the film and fiction about the small Hungarian town, with newspaper bag on his shoulder, face to the ground, is fascinated by the heavens, and explains the planetary motions every chance he gets. Like a mad dance choreographer, Valuska positions the men as planets, Sun, Earth, Moon, spinning them around each other with the patience of a theater director attempting to prompt children into synchronized movement.

János Valuska: You are the sun. The sun doesn't move, this is what it
does. You are the Earth. The Earth is here for a start, and then the
Earth moves around the sun. And now, we'll have an explanation that
simple folks like us can also understand, about immortality. All I ask
is that you step with me into the boundlessness, where constancy,
quietude and peace, infinite emptiness reign. And just imagine, in
this infinite sonorous silence, everywhere is an impenetrable darkness.
Here, we only experience general motion, and at first, we don't
notice the events that we are witnessing. The brilliant light of the sun
always sheds its heat and light on that side of the Earth which is
just then turned towards it. And we stand here in its brilliance. This
is the moon. The moon revolves around the Earth. What is happening?
We suddenly see that the disc of the moon, the disc of the moon, on the Sun's
flaming sphere, makes an indentation, and this indentation, the dark shadow,
grows bigger... and bigger. And as it covers more and more, slowly
only a narrow crescent of the sun remains, a dazzling crescent.
And at the next moment, the next moment - say that it's around one in
the afternoon - a most dramatic turn of event occurs. At that moment the
air suddenly turns cold. Can you feel it? The sky darkens, then goes all dark.
The dogs howl, rabbits hunch down, the deer run in panic, run, stampede
in fright. And in this awful, incomprehensible dusk, even the birds... the birds
too are confused and go to roost. And then... Complete Silence.

This scene, the first of thirty-nine slowly paced shots, is totally magic, particularly in Lars Rudolph's boyishly sweet rendition of Valuska's actions. But while in the original novel, I imagined the scene to be in a dark, fire-lit bar crowded with revelers, Tarr presents us with just a few late drinkers within a rather clean room, awaiting Valuska's arrival. In the fiction Valuska is equally awaited, but is also taunted by some who see him, as do most the townspeople, as a fool, a mentally-disabled being who dreams of the heavens only confirms his idiocy.

Throughout the film, Tarr—despite his grimly black-and-white palette—opens up and orders the landscape of this small town, which, in turn, normalizes it. The gigantic square, with only small groups of men huddled about it, seems far less foreboding than does Krasnahorkai's literary village.

The relationship between Valuska and the noted musical theorist György Eszter (Peter Fitz), is much vaguer here, and the love Eszter feels for the boy remains unspoken in the film until the very end, which invests their friendship with a feeling more of master and servant, rather than mentor and loyal friend. When Eszter is forced to leave the house in order to campaign for his detestable wife, Tünde (here played by Hanna Schygulla) he is not in the least shocked by the filth and debris he suddenly observes; indeed Tarr makes the place looks almost respectable, a town that in summer instead of the middle of cold winter, might possibly be a tourist destination.
Even the truck made of corrugated metal that carries the carcass of a whale into the square seems less menacing than mysterious. Because of the sparseness of the script, in fact, much of the menace and general grubbiness of this world is replaced by a sense of incomprehensibility. In Karasnahorkai's fiction the hidden figure of the Prince, who seems to be at the center of the violence soon to take place, speaks in a high-twittering-voiced, unknown language, but in Tarr's work simply speaks, quite normally, in another language. In short the continued normalization of the original often lends the film an even stranger quality. Why is everybody doing what they are doing? To what purpose? To what end?

This is particularly true of the horrific would-be dictator of the town, Tünde Eszter, who in Tarr's hands seems almost, at first, like an slightly interfering auntie instead of the monster that she is. Her relationship with the Chief of Police is presented less as a disgusting coupling of drunkenness and sex than it is as a kind of quixotic romance. So vaguely is Mrs. Eszter realized in the film that we cannot comprehend what she has in mind by demanding her husband campaign for her causes; certainly we have no way of knowing that it is she who has brought the terrifying circus act to town.

What Tarr does brilliantly convey is the sort of plodding inevitability of the violent riot that takes place. Although he greats everyone cheerfully as he moves through the city, as if all but the strangers in the square were one large family, the heavy booted Valuska stumblingly marches through his days, just as did the drunken oafs in the bar, symbolizing the prosaic pace and beat of life in this place.

When the riot does begin, Tarr portrays it almost as in a Brecht-Weill opera, with the hostile crowds marching meaninglessly through the streets en masse. Whereas in the author's fiction, Valuska himself is caught up in their horrifying actions and himself commits violent crimes, here Valuska simply disappears until after the brutal attack on the hospital and its patients—quite brilliantly depicted in Tarr's work—which literally wears out the assailants.

Just as in the book, Valuska winds up in an insane asylum, but, whereas, in the original he seemed to be forever locked away out of Mrs. Eszter's desire, here the poor boy seems truly to have lost his mind in the violence and its aftermath. Mr. Eszter's visit to him presents him and the viewer with new possibility of redemption for the city that did not exist in Krasznahorkai's fable.

In making these comparisons, I am not necessarily criticizing the film. It is its own work in which the characters and their actions may be far closer to everyday life, and, accordingly, even more horrifying than the grotesques of the fiction. Whereas Andreas Werckmeister's harmonic principles were insistently declared to be wrong in the Krasznahorkai work, in Tarr's hands the harmonies might even be restored with the survival of the beautiful innocence of the town's sacred fool, Valuska, particularly if Eszter, as he promises, will again take him in.