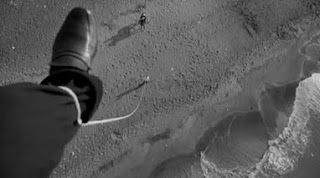 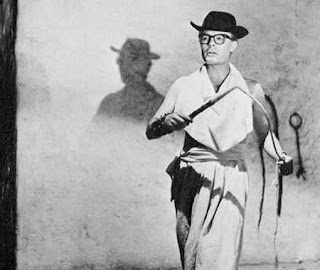 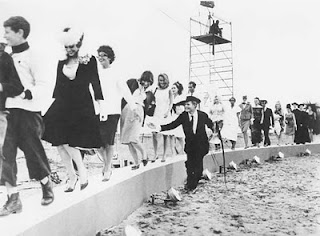 One of the most beloved films ever made, Fellini’s 8 ½ might almost be said to have no “story”—or, to be more accurate, it is a film than has hundreds of stories with no plot, which is perhaps what makes it seem so delightfully improvised, a thing discovered in process as opposed to a predetermined product. Of course, that is precisely why some American critics, particularly the deified Pauline Kael, so disliked the film when it first appeared. Kael felt the film was a “structural disaster,” while for me the very mix of forms—dreams, tableaux, memories, operatic acting, contrived sex escapades, and dozens of other genres—are not only what make 8 ½ so rich, but are what energizes it.

Other critics have described the film as Fellini’s most narcissistic product, a observation hard to disagree with. The film, begun as a kind of blank slate during a period where the director was actually suffering a creative block, was given the temporary title, “8 ½,” simply because it was to be his seventh feature film, plus two short segments (adding up to one more), and 1/2 other, a short film co-directed with Alberto Lattuada.

Fellini’s alter-ego, Guido Ansimi (Marcello Mastroianni) has retreated to a spa in the hopes to help cure himself of his director’s block. But the spa, filled with his cronies, old friends, and soon after, his several women—wife, lovers, confidants, etc.—represents a more hectic environment, perhaps, than if he had stayed home. Producers want more information about his “project,” designers want specifics, actresses want to know the characters they will be expected to play. What they don’t know is that is the very roles they are already enacting—their pleas, their declarations, in short, their exaggerations of themselves—will be the substance of Guido’s/Fellini’s “performance.”

If one counts Claudia (Guido’s former actress Claudia Cardinale), Luisa (Guido’s wife, Anouk Aimee), Caria (Guido’s lover), Rossella (Guido’s confidant, Rosella Falk), and other women surrounding him, past and present (Gloria Morin, La Saraghina, Madeleine) along with La signora misteriosa, the "mysterious woman," you could say that Guido has 8 ½ women with whom to cope as well.

The problem is that, although he is much beloved and, because of his talent, is at the center of their lives, Guido, as Claudia sums it up, has never learned how to love:

It is hardly Guido’s fault. Pampered and spoiled by the women of his own family as a boy, forced to see women as an evil temptation by his religious teachers (the wonderful pleasures of watching the prostitute, La Saraghina, dance for the young schoolboys, is one of the most beautiful scenes of the film), and hounded by women wanting a role in his movies, Guido has not ever been given a chance to realize how to love anyone, save himself—or the image of himself, which in this film is the same thing.

Guido is also a conflicted being, a man trapped between magic (magic spells such as the childhood phrase “asa nisi Masa,” mind-reading, dream imagery, omens, and other such mysteries) and a man of great logic and psychological insight. These two opposing forces, along with the pulls between art and finance, and all the sexual battles, nearly tear him apart. It is no wonder that much of 8 ½, from its opening scene to its last images, is centered around an attempt to escape, an escape from confining relationships, from ties of society, church, and state, and, finally, an escape from the bounds of earth itself.

Accordingly, Guido has concocted a vague concept that the film he is planning will be of the science fiction genre, and has had his designers build a huge structure that will appear as the launching pad of a rocket into space. Indeed, if you comprehend film as a kind of scientific medium—an application of light, mirrors, and captured images—his work is a kind of science fiction, with the emphasis on the latter. Yet strangely the fictions, the dreams and memories, of this film seem less absurd and surreal than do the narrative “realities,” with its lines of agèd pilgrims waiting for their daily baths, mudpacks, and elixirs of water. The huge stone chairs with large canopy life overhangs seem more like something out of a futuristic world than does the launching pad. His advisors’ and critics’ mumblings and grumblings seem to be words out of some mysterious, religious-like litany that has little to do with everyday life.

One could argue that this kind of surreality of life is at the center of all of Fellini’s films. As Carolyn Brown noted in her memoir about dancing with Merce Cunningham, travelling in the fifties and sixties in Italy, she met people who seemed just like the characters out of La Dolce Vita. Who would have thought, she ponders, that Fellini was, at heart, a realist?

Fellini takes all of this further, however, by transforming his fantasy worlds into a tinsel-town circus, wherein Guido alternates in his roles from trapeze artist, lion tamer, horseback rider, and—the metaphor central to nearly all of Fellini’s works—the clown. By film’s end, despite all the characters’ hurts and frustrations, the players are caught up in the dance of what is, at heart, an ordinary circus act come to town.

That revelation, in fact, is what makes Fellini’s works so human, that permits his films to be simultaneously alien and yet realistically moving. For at heart, we know, we could be part of that show as well, if only we let ourselves go, if only we followed our hearts.

Posted by greenintegerblog at 8:54 AM