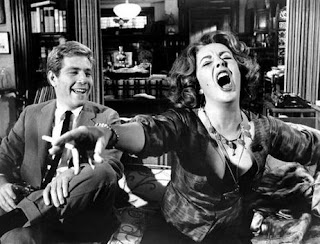 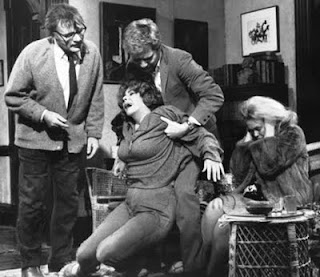 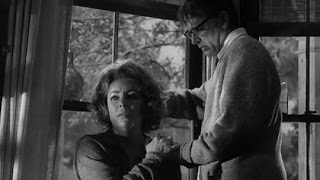 WHO'S AFRAID?
by Douglas Messerli

Ernest Lehman (screenplay, based on the play by Edward Albee), Mike Nichols (director) Who's Afraid of Virginia Woolf? / 1966

I could not have known on that evening of June 1966, when I first attended Who's Afraid of Virginia Woolf?, that film history was changing, caused in part by this film and Michelangelo Antonioni's work of the same year, Blow-Up. The former "special assistant" to Lyndon Johnson, Jack Valenti, had just been encouraged by Universal Studio head Lew Wasserman to resign his White House post and become head of The Motion Picture Association of America, a position Valenti held for 38 years. Warner Brothers was about to release Who's Afraid of Virigina Woolf ?and MGM was preparing to release Blow-Up in the US, both of them considering the possibility of sending the films out to theaters without ratings in fear of what Valenti called "the draconian piece of censorship" of the Hayes Code. In response Valenti and his staff eventually established the MPAA rating code that rid the system of X-rating, replacing it with NC-17, for adults only.

Nor could I have known that other directors such as John Frankenheimer, had been considered before the choice of Mike Nichols, and actors Bette Davis and Henry Fonda had been put forth for the roles of George and Martha. It might have been enjoyable watching Davis imitate herself in the film's early line "What a dump," as the couple returns to their house (Davis first spoke the line in her film Beyond the Forest), but it is almost unimaginable that Fonda would have been able to deliver the venom-laced sentences and witty repartees of the character George.

Fortunately, writer and producer Lehman chose Nichols as the director, who then brought in Elizabeth Taylor and her then-husband Richard Burton. Cinematographer Haskell Wexler was also a brilliant choice, as were the other members of the cast, George Segal and Sandy Dennis, the latter of whom seems perfect for the role, even though she later played similar characters in nearly every film in which she appeared.

The wicked twosome of the Burtons could not be better for Albee's George and Martha, whose lives are determined by their nightly verbal games. Albee himself has defined his major characters as people who use "language to wound and to amuse." And the author admits the film version is fairly close to his play.

Both play and film have virtually no story to tell, since the only thing that really "happens" is that after a college campus party a young couple, Nick and Honey—he recently hired on the faculty—take up the invitation to stop by for drinks. George is in the History Department, while Nick is a biologist. Martha's father is the President of the college.

The rest of the action is a thing of language, or, as George puts it, a "walking of what is left of our wits." The foursome, already somewhat drunk from the campus affair, continue their drinking as they play a series of emotional games, including "getting the guests" and "humping the host."

The emotional level of Martha's and George's argumentative wit is so high that Honey becomes sick and the audience itself, by film's end, is nearly drained. Yet for all the vitriolic rhetoric and hateful lies they use to manipulate and control both one another and their guests, the two are clearly also in love, a couple who painfully spar in a language that helps to keep them together and be alive. With no child, no real future and little left of any past, they keep their relationship vital by living in a linguistic world of the imagination not unlike that of the central characters of Tennessee Williams' A Streetcar Named Desire. And, as in that play, the language can cut and destroy just as surely as if it were a shard of glass—or a gun, a play version of which late in the film George brandishes.

We all may know some heterosexual couples who battle in this way, even if not as wittily. My own parents, deeply in love with one another, suffered numerous such evenings, although none so intense and operatic. But it is also clear that the closeted gay worlds of these playwrights in a time when gay men often gathered to play out just such mean and witty parlor games, must have been a strong influence for both Albee and Williams. The Boys in the Band is perhaps the most flamboyant example of this phenomenon, some of which I experienced first-hand in my earliest years of gay life.

Yet, as Albee has argued, and I have argued for Williams, these are not gay plays posing as pictures of married life. The couples may be somewhat campy constructions, but they are heterosexual, and their battles are those of husbands and wives, the latter of whom focus strongly on the desire for children, Honey having undergone a false pregnancy, with Martha creating an imaginary twenty-one-year old son, whom George verbally kills off in the last scenes.

Both Nick and George seem to have lost their virility: Nick is unsuccessful, evidently, when he attempts to mount Martha, and George is defined early on as a wimp by his wife. The women on the other hand, are quite forceful and vibrant: although she is unable to keep up with the others' drinking, Honey's weird dance of the seven veils (she has only one) reveals her sexual prowess, and Martha throughout the film has the constitution and earthiness of an ox. Taylor's call to the two men on the lawn, with her bleatingly simple shout of "Hey! Hey!" is one of the most memorable scenes of the film, deflating all the clever convolutions of the tongue that have proceeded it. Both Honey and Martha are clearly disappointed with their sexual lot.

The punning song of the party, "Who's Afraid of Virginia Woolf?" was sung by faculty wives and amused them highly. As Harold Lamport observed in his Saturday Review piece on the play, the song suggests a fear of intellectual women whom Virginia Woolf represented.

Lamport may be right, but Woolf also represents to these women, strongly heterosexual beings, a life they fear, with lesbianism and a descent into depression resulting in suicide. It is finally that possibility, it seems to me, that Martha envisions—a world of isolation and even death—that ends the play, as she responds to George's repeat of the question: "I...am....George....I.....am...." The truth of her existence cannot entirely be hidden, even by all their dreadful "fun and games."