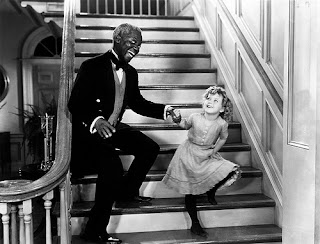 Franklin’s all Black 1932 movie Harlem is Heaven is a disaster of story and acting, with an absolutely remarkable cast, nonetheless, of musicians and dancers, including Bill “Bojangels” Robinson and Eubie Blake and his Orchestra. Robinson is the center of this piece and does numerous numbers throughout, all of them brilliant. But the best of most famous dance, the “Step Dance” stands out as one of his most memorable dances of all time.

In some respects Robinson repeated this dance, or at least elements of it, three years later, as he strutted up and down a set of stairs with Shirley Temple in The Little Coronel, but in the original the simple set consisting of a small staircase of five steps up and five steps down better reveals his amazing footwork, and stunningly points up his simple but graceful dancing. And unlike the second “Step Dance,” he does not have to play an old “darky” to get the opportunity to strut his stuff.

The dance begins with a simple multiple tap as he learns forward, exploring the steps as if he were perhaps afraid of undertaking the moves he is about to make. Then up the first step upon which he gently taps out a rhythm, before moving to the second and so, until he reaches the fifth, retreating back down the five stairs. But soon he is at the top again, this time moving rhythmically down the other side, and, with a renewed every, moving up and down, (skipping one going down by twos, etc) back and forth in an incredible pattern of taps that surprise us with its simple variety of ascent and descent.

Robinson displays little of the athleticism of the marvelous Nicohlas brothers, but his grace and lithe moves cannot be matched. It’s as if this energized movement where a simple warm-up for something else—a leap across drums as he performs in the “Drum Dance” or the slip and slides of the marvelous sand dance of Stormy Weather. But there is something so abstract and pure about his “Step Dance,” that, in my estimation, it can’t be matched.