Stanley Donen and Gene Kelly | Singing in the Rain 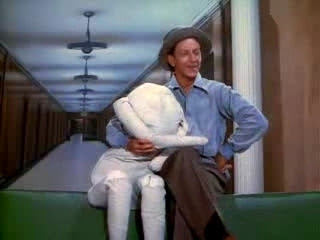 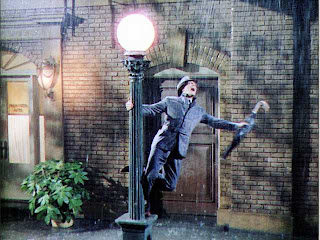 I have to admit that, perhaps because of the fact I saw so many Francis and the mule movies in the early 1950s, I had never given Donald O'Connor, the actor in these silly caprices, a thought until as a college student I saw a tape of Singing in the Rain. His burlesque-like humor still, from time to time, makes me cringe, but what a remarkable dancer he was, particularly in comic numbers such as "Make Em Laugh!" Based on Cole Porter's "Be a Clown!" Nacio Herb Brown's and Arthur Freed's joyful anthem to humor is perfect for the rubber-faced O'Connor, who uses everything in the room as a prop. With his bright blue eyes, hat on head, O'Connor dances across couches, chairs, walls and, after fighting a battle with a headless dummy that might remind some viewers of the Surrealist artist Hans Bellmer's dolls, O'Connor spins in a circle upon the floor like a Samuel Beckett figure, unable to stand. His final series of backward leaps off walls painted to look like vast perspectives and his last dive into a thin veneer of wood truly does bring smiles to all faces, both out of wonder for his rhythmic energy and his ability just to survive.

Little need be said of one the greatest of all film dances, "Singing in the Rain," by the matchless Gene Kelly. With a broad smile upon his face, Kelly doddles down the street in a rain storm before embracing a light post from which he hangs in midair, spinning his umbrella like a top, and, in a blue, rain-soaked suit and red shoes, splashing his way through the puddles as a joyful child might. The lively tap number quite literally plays out its lyrics in his body movements, revealing physically that despite the natural elements and all they symbolize, everything can be conquered through the inner joy of love.