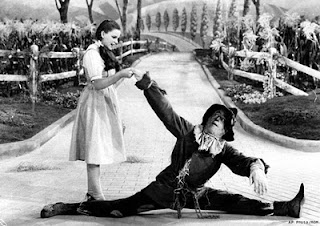 It seems as if everyone in Hollywood was, in one way or another, involved in the writing and directing of the great film classic The Wizard of Oz. But the enduring song "If I Only Had a Brain" had only a composer and a lyricist, the incomparable Harold Arlen and E. Y. Harburg. Originally written for the 1937 Broadway musical, Horray for What!, it was cut from that production. Writing new lyrics, Harburg featured it in his great score as a perfect song for the movie's talking, dancing scarecrow.

Dancing as if he were a straw-stuffed puppet whose strings were pulled from somewhere on high, Bolger, always an entertaining and comical dancer, outdoes himself with the lightness of his feet. At times his entire body seems almost to float, as if he really were stuffed with hay instead bones and gristle. Yet, as a straw man, each attempt to fly off into dance ends, sadly, with gravity's pull, and his body's collapse.

The song he sings also seems to float in its comicality, making his poignant desire to "have a brain" even more magical, since we realize immediately that anyone who can think of what to do with a brain like he can, is near to genius:

I could wile away the hours
Conferrin' with the flowers
Consultin' with the rain
And my head I'd be scratchin'
While my thoughts were busy hatchin'
If I only had a brain.

He and Dorothy (Judy Garland) end this wonderful dance number in their memorable skip-to-my-lou down the yellow brick road, which also demonstrates the dancing talents of the young Garland. Garland, while not a great dancer has certainly shone in several dance numbers. Her pairing with Fred Astaire in "We're a Couple of Swells" in Easter Parade and her memorable struts in "Get Happy" in the musical film Summertime immediately come to mind. But in her gingham dress and red ruby shoes, she is unforgettable. Even the dog, Toto, trots along on cue.