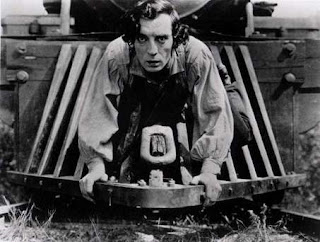 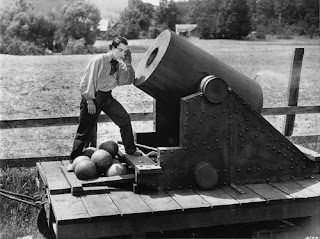 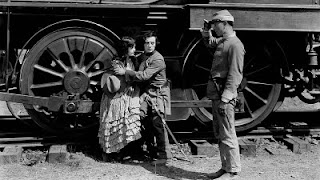 THE UNIFORM
by Douglas Messerli

Recognized as the greatest of silent films and as one of the best US films of all time, Keaton's The General has often been written about. My viewing it for a second time recently in conjunction with The Academy of Motion Picture Arts and Sciences "Summer of Silents," perhaps for the knowledgeable reader will offer few new insights. But I do feel it necessary to make some observations.

I believe I could write an entire essay on the face of Buston Keaton, or at least on his entire physique. The thin, lean body of Keaton's moves with such absolute grace as he spins, bends, twirls, rolls, and jumps in an out of each frame more like a dancer than a clown. He has a kind of dancer's body, and with his long face, accentuated by his large, heavily made-up eyes, his equine nose and his thin, clearly painted lips all framed by long, curly waves of hair, he has the look of a Nureyev or a Baryshnikov (at least in his early days). Keaton's trademark straight face reiterates this feeling, as if dancing with a swan or, in Keaton's case, a large mechanical monster, were the most natural thing in the world.

Despite The Gerneral's infectious humor, there is something consistently fragile about Keaton's world. It is not just, as in Chaplin, that everything has the potential to go wrong, but that Keaton (and fate) convert even the most absurd and wrong-headed actions to slightly heroically human achievements. He is, most definitely, not a born hero, and yet as the final title card announces, he is among the "Heroes of the Day."

What makes The General so exceptional is that Keaton's character Johnnie Gray is "wrong- headed" on almost all accounts. His beloved Annabelle (Marion Mack), we gradually discover, is a petulant and slightly empty-headed woman who cannot even comprehend how to toss wood into the train's boiler. The only act she seems to be acquainted with is the housewifery task of sweeping, which she attempts to accomplish as the train roars madly forward into mayhem.

Even more terribly, it is she who causes the series of events that poor Johnnie must undergo. Once war is declared between the North and the South, she insists that her lover join up with the Confederacy as immediately as do her brother and father. But Johnnie, valued more for his train-conducting skills than for any potential fighting ability, is passed over, as time and again he attempts to move into the line—even at one point lying—to enlist. Like all empty-headed women, Annabelle is a Romantic, who believes in the heroism of war, and when she (mistakenly) is told by her kin that Johnnie "didn't even get in line," she agrees that he is a disgrace to the South, and refuses to ever talk with him again unless he appear in uniform.

It is the uniform, accordingly, not a commitment to Southern principles or ideals, that generates Johnnie's actions. Indeed, rejected from the line for the last time, Johnnie hilariously predicts "Well, don't blame me if you lose the War!"

His struggles with the North, accordingly, are almost all personal. He is outraged by the robbery of his train and desperate to prove himself worthy of Annabelle's love. The Gerneral, unlike D. W. Griffith's glamorization of the South and Civil War, is a satire of war, and is saved, accordingly, from taking a position precisely because of Gray's personal quests. The tactics of war and the ineptitude of warriors is split nicely in this film between the North and the South. Johnnie finds himself first wearing a uniform of the opposite side before he is awarded his Southern military dress. And that costume presents further problems as the platoon parades past, requiring him to salute each man while simultaneously trying to embrace and kiss his girlfriend. It appears that once again, the war will seriously impede his life. But as in all past situations, Johnnie quickly comes to a solution: sitting on the other side of Annabelle, he salutes automatically while continuing with his kisses.

One might almost think that Keaton had read F. T. Marinetti in his praise of war and the machine, since it is often the machine that controls his own and others' actions. The most particular example of this is when Johnnie attempts to fire cannon balls on the enemy's train, twice without success, before the cannon, rattled by the tracks, falls into range aimed directly at him. A swerve in the tracks saves the day, as the cannon hits near its target, missing its aim that might obviously have killed Johnnie Gray. At other times the train pulls ahead as Johnnie is attempting to gather firewood, and when Annabelle later joins him, she too moves the train into positions, back and forth, that make his attempts to rejoin her nearly impossible. The General and the other trains he attempts to conduct seem to play as active of roles as the engineer himself.

The vicissitudes of war also support in The General a sense of absurdity that one might almost describe as being close to Dada. Particularly, in his attempts to rescue Annabelle, the two stumble over and away from each other in the dark night, as in a stuporously crazed dance, nature offering up a bear, rain, and endless trees that impede any forward motion, until they are finally forced, like one of Beckett's characters, to stay put upon the ground. The title card reads: "After a nice, quiet, refreshing night's rest."

Even in the scene before that, in which the action, in hindsight, seems less improvised than their embracement of nature, is delightfully absurd. Seeking to escape the forces of nature, Johnnie climbs through a window to steal some food, only to discover he has entered into the Union General's headquarters. Just as characters in later movies (one thinks immediately of Jack Lemmon and Tony Curtis hidden under the banquet table of the mob in Some Like It Hot) Johnnie is forced to hide beneath the table where the General is making plans to invade the South. But even here, in the throes of intrigue and possible death, Keaton takes the story in an absurd direction as one of the listening soldiers inadvertently burns a hole in the tablecloth with his cigar. The act seems pointless, until a few minutes later, as they bring in their captive, Annabelle, Johnnie glimpses his lover through the same hole.

That scene seems nearly a perfect metaphor for Keaton's vision. All mistakes, bad judgments, errors in logic, and plain human frailties, have the potential in his world to be redeemed, to be transformed into something good—or at least something else. At film's end, the fact that Johnnie has now been made a Lieutenant means little, we suspect, since the insanity of love is at the heart of the achievement. Johnnie (with Keaton's impeccable poise) will continue to dance through life with the grace of an unintentional acrobat.

Posted by greenintegerblog at 10:17 AM