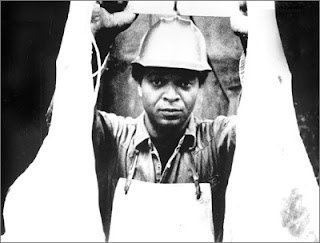 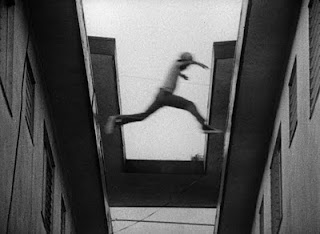 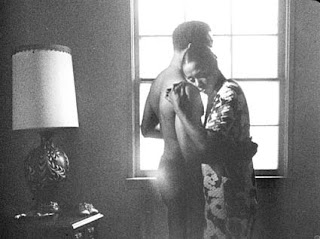 Although Charles Burnett’s Killer of Sheep was first released in 1977, I first saw the production 30 years later in New York, when it was revived in some American cities prior to its release as a DVD.

Accordingly, I wrote this commentary in 2007; but the film clearly resonates with concerns of this 2003 volume, “Voice without a Voice.” Indeed, Burnett’s film might be seen as an exemplar of precisely these issues. Although it clearly represents the destructiveness of racial patterns in American culture, in its influences of Italian neo-realist filmmaking Killer of Sheep outwardly observes without directly speaking of the majority culture which has condemned these South Central Los Angeles/Watts ghetto individuals to live such desolate lives. There are only two white figures in the entire film, both members of the working class: a co-worker of the major character, Stan, in the local meat-packing plant—the source of the film’s symbolic title—and a woman who owns the corner liquor store, who offers Stan a job with a bonus of backroom sex.

Burnett prefers to explore the effects of racial inequality by focusing on Stan’s family—his wife, two sons and daughter—and a handful of their friends. Focus, however, is not quite the appropriate word, for Burnett more than focuses on these individuals as his camera moves in so close that the screen literally is filled with body parts and the shabby debris of their house. Even the most beautiful of faces—and Stan and his wife are beautiful people—seem bruised and pock-marked by this exaggerated realism. The slightest smudges upon the cupboards or scuffs upon the floor are so magnified that they seem to immediately signify the abject poverty surrounding the family. Without proper closets or chests-of-drawers, clothes, and various objects are strewn across the floors as if an earthquake has just passed.

Filmed in gritty black and white, the famed Los Angeles light has no way of penetrating their run-down homes, the surrounding sand-lots, and decaying buildings of the neighborhood. The spindly palm trees that dot the neighborhoods appear—as they truly are—like surreally-conceived set decorations, an attempt to prettify a derelict world.

Violence is not only pervasive; it defines nearly every waking moment of this family. Stan’s first lines of the movie, as he scolds his older son for not protecting his younger brother, are immediately followed by the mother’s sudden slap of her son’s cheek. In the very next scene the boys gradually move forward holding, like ancient gladiators, a large shield of wood, each taking a quick peek from its corners as they proceed forward, pelted by rocks thrown by an opposing group of boys. Throughout the film young boys and girls fling themselves from the rooftops and at one another in seeming preparation for the hard-knock life to which they are doomed, a world where, we are shown, wives shoot at their husbands and neighbors plot and accomplish robberies in their backyards. A friend of Stan’s unsuccessfully attempts to engage him as an accessory in a murder.

Indeed, in a world where even the attempt to fix up an old car ends in frustration and failure, where a good man like Stan is forced to slaughter the innocent (an act which not only kills sheep, but, significantly, kills his sleep, stealing from him even his dreams), there is a constant feeling of anger and resentment among family and friends.

As film critic Paul Virilio suggested (Wide Angle, XX, no. 3 [1998]), the world portrayed in Killer of Sheep is so claustrophobic that it resembles a prison without possible escape.

The Los Angeles of Killer of Sheep is almost entirely the African American
working-class neighborhood of South-Central. Architecturally, the ghetto
differs from its counterparts in other cities in the predominance of single-family
dwellings and small apartments. The cityscape is flat, monotonous, dilapidated,
of limited imageability, and with no conspicuous internal differentiation.
There are no signs of commerce except a single liquor store, or of industry
except the slaughterhouse where the hero works.... And there are no signs of
connections with other parts of the city except, briefly, the Southern Pacific
railroad that appears to share the area’s defunct lethargy; its tracks are children’s
playgrounds and its engines mostly immobile. No trace of any other Los Angeles
may be seen; no business districts, no supermarkets, no luxurious high-rise
apartment or office buildings, no Technicolor sunsets, no homes of the stars—
not even the Watts Towers. Most remarkable of all, there are no freeways. Indeed,
there are almost no cars. And so nothing can happen.

In short, Burnett portrays the city itself with the same sense of exaggerated realism. In the only attempt to escape from their imprisonment, Stan and friends plan to picnic in the “country,” an outing foiled by a flat tire (the only tire the driver has). Is it any wonder that for these despondent individuals their lives, like that tire, seem inert?

At another moment, when Stan’s wife speaks out angrily of her own loneliness, his daughter climbs upon his knee as he tenderly holds her. Love, often grabbed on the sly whenever it is proffered, is clearly the only real hope these individuals have, their only possible salvation. And the film ends on a strangely uplifting note, as a physically handicapped friend of Stan’s wife announces that she is pregnant. The joy upon the women’s faces says everything: a new life—for all of them—has just been announced.