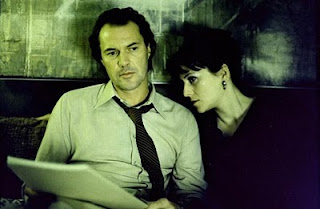 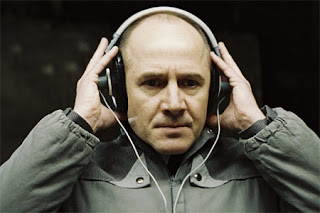 Awarded the best film of the European Film Awards, the Deutscher Filmpreis, awards at numerous other film festivals, and chosen as the Best Foreign Film of the Academy Awards of 2007, Florian von Donnersmarck’s Das Leben der Anderen (The Lives of Others) is truly an outstanding work of cinema.

Through an ever-deepening narrative and lush interior imagery Donnersmarck gradually demonstrates—through the spying activities of the Stasi (the former German Democratic Republic secret police force)—just how intellectually and spiritually pernicious such a paranoid governmental system as the former GDR was. The beloved GDR playwright Georg Dreyman, despite his idealistic support of the system and squeaky-clean credentials (he, supposedly, was admired even by Minister Bruno Hempf) is suddenly suspected of Western leanings, and an equally idealistic spy in the Communist regime, Capt. Gerd Wiesler, is ordered to investigate. As Georg and his actress girlfriend, Christa-Maria Sieland, attend a party, the Stasi moves into their apartment, installing microphones in the light switches, inserting cables into the walls, and connecting everything to an attic space above the apartment. The Stasi, who apparently know everything about everyone, even threatens a neighbor of Dreyman’s, who observed their comings and goings, with her daughter’s dismissal from a position in the university if the mother dares to report their intrusion.

Much of the early part of the film simply outlines the process of spying, as Wiesler listens in to every aspect of Dreyman’s life, including his love-making and statements about the GDR government. Had the film gone no further it might have revealed to audiences who had never known or forgotten the abolishment of privacy that existed in that system. But Donnersmarck takes this work in new directions by creating in Dreyman an innately “good man,” a man who clearly believes in the Communist system and attempts to create work within its restrictive structures—a man symbolically connected to this idea in the film through a gift of sheet music, “Sonata of a Good Man,” from his director-friend Jerska.

When Weisler reports his findings to friend and superior Lt-Col. Anton Grubitz, he is merely encouraged to “get” something on Dreyman; as he observes the comings and goings of both Dreyman and his girlfriend, it becomes clear that Christa-Maria is, in fact, being forced into a relationship with Minister Hempf. Weisler’s role, accordingly, shifts from a simple observer of duty to a position of being a kind of traitor, from hard-working member of the Stasi to someone who is being used to get Dreyman out of the way. From that moment in his life we begin to observe changes in Wiesler, who in his complete servitude has seemingly never before thought of any possible evil in his acts. Now Wiesler, through his voyeuristic activities, is slowly awakened to sexuality and, more importantly, to the power of art.

The Stasi agent also soon realizes, moreover, that things have begun to unwind in Dreyman’s life. His girlfriend’s weekly outings with the Minister come between them, as the playwright encourages her to stay in and accept the consequences of her refusal to give into Hempf’s sexual demands. Dreyman’s director-friend, blacklisted for several years, commits suicide. An article Dreyman writes about the rise of suicide in the GDR—whose government denies any involvement in these deaths by changing the language itself, describing suicide as “self-murder”—must be smuggled out of the country for publication. And bit by bit, Dreyman has no choice but to participate in illegal activities, hiding a special typewriter beneath a floorboard, meeting with dissident friends, etc. Without a safe place to gather, the group decides to test Dreyman’s apartment to see if it is bugged, pretending that they are planning to smuggle someone to the West. For the first time perhaps in his life, Wiesler decides against appropriate action and fails to report the incident, but in so doing ultimately dooms Dreyman and his friends.

The various strategies and plots Dreyman and his friends begin to hatch are portrayed by Wiesler as plans for a celebratory play. When the article on suicide appears in the West, however, Wiesler’s superiors become suspicious at the very moment when Minister Hempf grows disenchanted with his actress prey. Christa-Maria is arrested for accepting illegal narcotics and Dreyman’s apartment is searched and plundered; yet no typewriter is found. As a master Stasi interrogator, Wiesler is given no choice but to question Dreyman’s girlfriend, intimidating her until she reveals the location of the playwright’s typewriter. In that devastatingly painful scene, Christa-Maria gives in to his demands, simultaneously dooming her lover and destroying her own sanity.

She is released, but as the Stasi returns to search Dreyman’s apartment, she runs from the house into the street, facing a car head-on in yet another act of “self-murder.” Ironically, when the Stasi check the floorboards where they have been told the typewriter is stashed, they (and Dreyman) are shocked to find that it is missing—clearly Wiesler has gotten to the apartment before their arrival. The former obedient servant of the State, Wiesler is demoted to the position of a letter-opener—a worker whose job it is to steam open the letters of his fellow countrymen and read them for possible infractions.

Had Donnersmarck ended his film here it would have stood as a stronger statement of the effects of governmental paranoia. Even if one found flaws—as I did—in his presentation of the sudden changes in Wiesler’s personality (were it only possible for art to so quickly change an individual!), one could have read this as a fable to possibility in a world where nothing is left to chance.

The director, however, carries the film beyond the fall of the Berlin Wall, as Dreyman, now free to present his dramas (which, unfortunately, in the few scenes we witness seem to be unbearably bad theater), encounters former minister Hempf, inquiring of him why his apartment had been made an exception to Stasi spying. Hempf gloatingly reveals that Dreyman had not been made an exception, that he need only check the lights and walls to find the traces of government surveillance. Returning home, the playwright pulls apart the walls of his apartment in a manner that somewhat reminds one of Harry Caul’s maniacal destruction of his own apartment in fear that he has similarly been “bugged” in Francis Ford Coppola’s The Conversation.

After uncovering the truth and realizing that Christa-Maria evidently led the Stasi to him, Dreyman visits the state archives, where he uncovers Wiesler’s role in the affair and how he purposely misled the government in his reports. In a reversal of power, Dreyman now “looks up” Wiesler, only to discover a now poverty-stricken man, clearly working as a day laborer in distributing fliers. The author makes no attempt to communicate, championing the man anonymously in his novel based upon his experiences, Sonata for a Good Man, a book Wiesler accidentally discovers, purchasing it in celebration of himself.

This later part of the film, I argue, unnecessarily pulls the story away from its Kafka-like implications and detracts from the haunting and terrible tale of the reality that seems beyond belief. As it ends, Dreyman is presented almost as a kind of new hero, an exemplar of how the “good men” of the old GDR will perhaps transform a reunited Germany. Of far greater importance is the realization that the world is in constant danger of such paranoiac systems and should be terrified of the individuals behind them, a danger—if people like US President Bush, Attorney General Gonzales, and others who use terrorism as a tool to constrict individual rights prevail—that may affect our own supposedly free lives today.