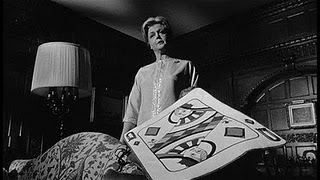 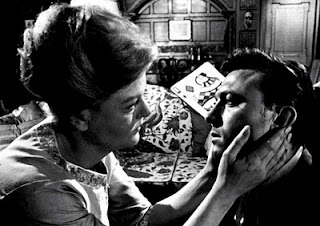 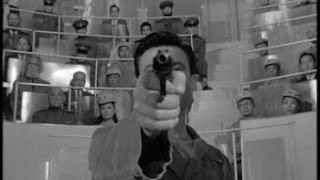 George Axelrod (screenplay, based on a novel by Richard Condon), John Frankenheimer
(director) The Manchurian Candidate / 1962

Frankenheimer, who died on July 6th of this year, described The Manchurian Candidate as being centered around what he described as “double images.”And indeed, the film contains a good many of these, which I would prefer, however, to speak of as “mirror images,” images that, while revealing one reality also suggest or show its reverse, what might be perceived as the darker side of what the surface presents.

The return home of Raymond Shaw, for example, is, in one sense, the homecoming of a war hero, the supposed celebration of a man who has received the Congressional Medal of Honor for his bravery in saving his patrol in the Korean War. Yet Raymond is clearly not at all approving of his step-father’s and mother’s “disgusting three-ring circus” to celebrate him, and we soon find out that, although described as a “hero,” a man referred to by his entire unit as “the kindest, bravest, warmest, most wonderful human being I have ever known in my life,” he was scornfully dismissive of his underlings, was a man aloof from his fellow men.

We already know, from the film’s very opening scene, moreover, that although he has been awarded the medal for saving his men from capture that his unit was captured in Korea in 1952, as the men, against army strategy, marched along a path in single file. And we gradually discover that the “loveable Raymond Shaw”—as one of his fellow men sarcastically describes him—is not even a hero, but was brainwashed along with his fellow men, forced to strangle fellow-soldier Ed Mavole, shoot their young “mascot,” Bobby Lembeck, and programmed to do the biddings of his handlers, foes of the American government.

One of the most famed of the mirror images of the film is represented in Frankenheimer’s brilliant presentation of these American soldiers in enemy hands—recalled in a dream of intelligence officer Ben Marco—as they sit in what seems at first to be an elegantly decorated room among a gathering of a lady's garden club that, upon the camera’s second pan around the room, reveals a room closer to an observatory operating room, wherein sit numerous male Communist officials (both Chinese and Russian), discussing their success at reconditioning their captives.

At the congressional session wherein Marco is serving as public relations officer, we see one of Frankenheimer’s most brilliant mirror images. As senator John Iselin interrupts the hearings with McCarthy-like charges of governmental ties with Communism, we observe the drama in the room—which gradually is reduced to a shouting match—while at the same time seeing it replayed, from a slightly different perspective, on a television monitor—a mirror image that would later become a staple in such politically-centered movies.

Although Marco speaks of Shaw—like the others—as a good man, he has nightly dreams that convey another truth, and admits to his superior that “It isn’t as if Raymond‘s hard to like, he’s impossible to like. In fact, he’s probably one of the most repulsive human beings I’ve known in my whole—in all of my life!”

The discovery by Marco that Chunjin, the former Korean guide, is now a butler working in Shaw’s apartment and the revelation of a letter from Al Melvin, another of the army patrol members, that parallels his own nightmares, finally forces him to act, informing his superiors of his and Melvin’s dream, being asked, in response, to identify the villains from two simultaneously projected sets of photographs—these representing double images more than “mirror” ones—some of bouncers, thugs, and normal individuals, the others of high-ranking members of the Communist party.

If Raymond is acerbic and intellectually aloof, we also discover that, for at least one year, he was a true Romantic, having fallen in love with the daughter of his mother’s political rival, Jocie Jordan.

The mother’s determination to end that relationship draws one to conclude that she is also someone who is not what she pretends to be, that her evident devotion to protecting her son has yet another manipulative element that becomes clearer as the film proceeds, as we ultimately discover that she is not at all the upright American conservative that she pretends be, but is a member of the Communist party devoted to their takeover—albeit on her terms—of the American government.

The intense play of doubles or mirror images turns tragically-comic in the penul-timate scenes of Frank-enheimer’s work where Iselin, dressed as Lincoln—a man in real life who was 6 feet, 4 inches tall—attempts to bend under a limbo stick. Having revealed that Raymond’s obedience is triggered by the Queen of Diamonds in a deck of cards, Frankenheimer almost transcends believability by having Jocie attend the party dressed as that playing card!

Love seems to win the day once again, as Raymond and Jocie run off to be married, but by now we recognize that it cannot end well, and we are hardly surprised when, soon after, he is ordered to kill Jordan, and in the process murders Jocie as well.

By this time, Raymond’s identity has been lost in the hall of mirrors of his ever-shifting desires and commands. And finally, dressed as a priest, Raymond both curses and saves himself by reversing his role of the assassin, killing not the intended target, the presidential candidate, but the “Manchurian candidates”—the individuals who have ordered the murder: his mother and father-in-law—before turning the gun upon himself, simultaneously destroying both the surface and mirror images, and by doing so, breaking through the looking glass.

The movie that has begun with a loud American marching band celebrating the return of a hero, ends in a solitary whimper of profanity as Marco utters Raymond’s eulogy (presenting the opposite, in many respects, of what he has seemed to be), ending with the words “Hell. Hell!”