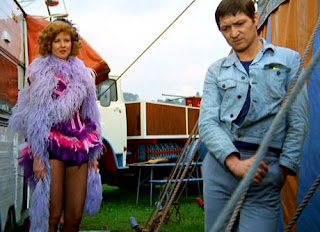 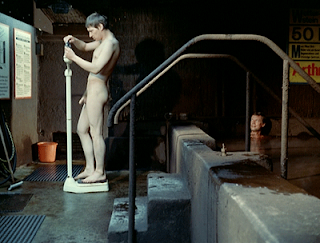 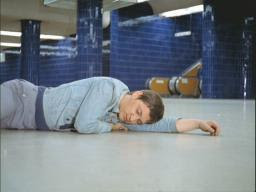 THE TALKING HEAD
by Douglas Messerli

Despite its tragic ending depicting the death of its hero, his body being robbed by young children, I read Fassbinder's 1975 film, Faustrecht der Freiheit (Fox and His Friends) as a dark comedy, a work that, in many ways, relates to his Petra von Kant, particularly in the melodramatic pitch of the latter’s language, which takes it to the edge of the theater of the absurd.

In Fox and His Friends, however, the hero, Franz “Fox” Biberkopf (played by Fassbinder himself) speaks in a completely naturalistic way, while those around him talk in the affected language of a British drawing room comedy; they are, after all, striving to represent themselves as coming from a kind of bourgeois notion of the upper class, at the same time that their accents, furnishings, clothing, and all other aspects of their lives reveal their middle-class roots.

Only Fox speaks somewhat normally, although he is regularly described as stupid and uncouth. He is, after all, a true man of the proletariat, a working-class clod who plays a character in the carnival act of his friend and lover, who in the very first scene of the film is arrested for tax evasion.

In the carnival Franz plays what is described as a “talking head,” a man who supposedly has lost his body, except for his head, which, as “a miracle of science” has been magically kept alive. Apparently, he talks to the audiences, answering their questions and explaining his unusual existential condition.

We never get to see the real act, but we do observe Fox going through the rest of his life as a kind of “hollow man,” an empty being whose only tool of survival is his somewhat street-smart skills which allow him to con friends out of money and to engage people like Eugen Theiss (Peter Chatel), his soon-to-be lover, with sharp barbs and quick-witted dismissals when he is accused as smelling badly and gaining weight (Fassbinder, so the story goes, dieted heavily before playing Fox)—all failures of the body.

Early in the film, as he insinuates himself into the lives of the seemingly wealthy young men he meets through a gay antique furniture dealer, Max (Karlheinz Böhm), that he might even outwit these nasty snobs; after all, he has just won 500,000 marks in the lottery, and his sense of new financial possibilities seems almost to make him able to stand up against their snooty dismissal of his clumsy and uncouth behavior. But, in the end, Fox is only, as his real name Biberkopf suggests, a "beaver-head," a hard-working mind that has the ability to assimilate little in the way of imagination. And it is precisely that lack of imagination that prevents him, despite his alcoholic sister, Hedwig’s and his old bar friends’ warnings, to see through the pretense of his new acquaintances.

Eugen, his new lover, has little skill when it comes to thinking, but is, compared with Fox, a person who celebrates the body, a handsome and fairly well-dressed—if you can forget some of the outrageous combinations of patterns and textures of his suits and ties, all of which betray his lack of any true sense of style—who has been taught to present himself in a comely manner, with a well-spoken voice in both German and, so he claims, French. When the couple later travel to Morocco, however, it becomes apparent that Eugen cannot speak the latter language fluently, while Fox communicates with an Arab hustler with a few words in English.

His only achievements of the mind relate to his and his family members’ abilities to trick those less fortunate out of their finances and possessions; if Fox is a busy beaver—working for the bookbinding company of Eugen's father even though he has loaned them the money for their survival and is now the legal owner—they are born vultures. And much of the second half of the film is a painful testament to how they cheerfully strip him of his money and any common dignity he might have had. First through the loan to save the company, then, when Eugen is thrown out of his apartment for housing Fox, through the purchase of a condominium and furniture—some of the most absurd combinations of period furniture, patterned wallpaper, and ridiculous objects (including a circular set of attached red-leather chairs, each facing slightly away from the others) imaginable. Fassbinder's set designer should have received an award just for uncovering these garish and tasteless creations.

Soon after, Eugen insists upon a new car. Later, supposedly to reignite their love, the two take the trip, as I mentioned, to Northern Africa. All is paid for by Fox.

Yet Eugen and his father take their abuse even further by replaying Fox's loan through his salary and forcing him to sign away the rights to his property. When Eugen explains the situation to Fox, the father responds to his son, "by principle you are right." This man—who unlike Fox's sister, who drinks at home, does his drinking at the office—can't even conceive what the word "principle" means. His only code of conduct is survival.

Soon after Eugen's former boyfriend moves into the apartment, and Fox is locked out.

Certainly these scenes do make us cringe. But we must remember that the money Fox has used to get what he hopes might represent love and propriety has been won on a fluke with a few marks stolen from the local florist, "Fatty" Schmidt, a character who clearly brings up Fox's sense of guilt later in the film as Fatty tries to console him; Fox strikes the man in what, to use a rephrasing of the original German title, seems almost to be a "fist-fight for freedom," the freedom, at least, from being reminded of his past.

Fassbinder's portrayal of Fox is brilliantly subtle, particularly as he begins to spend his money. His repetition of "cash, cash," as the bank teller queries him when he demands the 100,000 marks to loan to Eugen's father, is spoken with extreme nervousness and agitation; and later, as Eugen imagines the rooms of the empty condominium being filled with furniture, Fox turns away with a horribly sickened look on his face. It is as if, throughout his spiraling return to poverty, he is aware of what is happening but unable to prevent succumbing to his lover's demands. Like Petra in Fassbinder's earlier film, there is a kind of absurd joy even in the tortures of love. His busy head, filled with ridiculous aspirations, is slowly being drained of consciousness, and near the end of the film he goes as far as to visit a doctor, reporting his symptoms. Finding nothing outwardly wrong with his patient, the doctor proscribes Valium, a drug which may help to relieve his real anxieties, but which can result in further confusion and depression.

Broke, Fox returns to his old haunts, where he meets up again with two American soldiers he has once tried to pick up. Since they are now in his gay bar, he cheekily asks them once more if they'd like to join him, to which one of them asks how much he is willing to "pay." With that question, Fox, turning away and hanging his arms around a friend's neck, cries out, "Pay? Pay?" pointing up the irony and absurdity of the life he has led; once the hustler, he has become the consumer, a man, as it puts it, "who pays for everything," not only with money but with his life.

The very next scene is played out in an over-lighted subway where Fox lies
dead, killed evidently from an overdose of the Valium. Two well-dressed young boys, vultures in the making, rob him of the money he has received for selling his car, a gold watch, and even his jacket. Two of his former friends, seeing the body and pronouncing him dead, quickly scurry away, not wanting to get involved.

How did this comic tale of an absurd life suddenly turn into a tragedy one has to ask? Of course, in many of Fassbinder's films, that is just what happens. People with such outrageously dramatic views of life, with hopes out of proportion to possibility or reality, true dreamers, in other words, who live in their heads instead of inhabiting their entire bodies, are often unable to survive. But it could also be as Jim Clark has suggested on his on-line review of this film (http://jclarkmedia.com/fassbinder):

That metro/subway stop is unnaturally—eerily—clean and
quiet. Everything is blue and white, even the clothes worn by
all the characters who pass through. ...Nothing earlier is as
stylized. So, is this just a "Valium-5"-induced nightmare vision?
...Has Fox learned, from his devastating experiences, that the
glitzy "lifestyle" he has just lost was what was destroying him?
So maybe—just maybe—Fox is ready to begin putting himself back
together.... If the final scene is just a nightmare.

It could be that Fox has finally been able to add some true imagination to the pipe dreams that have filled his head. But even if Fassbinder meant it as a "real" act, we have to remember that little else has been real in Fox's life.