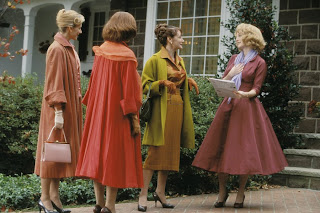 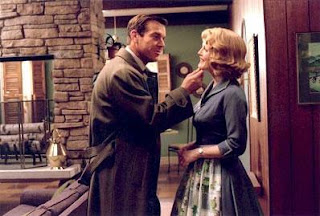 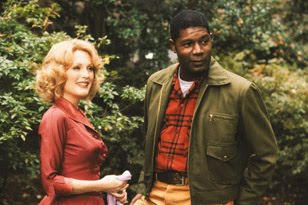 NOSTALGIA FOR AN IMAGINED WORLD
by Douglas Messerli

Haynes' suburban 1950s couple, Cathy and Frank Whitaker, with a son and a daughter, a beautiful home, lovely friends, and a bank account that might easily see them through retirement, seem absolutely blessed; "You're the luckiest guy in town!" insists Frank's friend, Stan Fine. But anyone who has seen a Douglas Sirk movie or any other soap opera about that period, knows even before the movie has begun that, as Frank says to Stan: "It's all smoke and mirrors, fellas." Like numerous films of that period such as Sirk's All That Heaven Allows, (clearly a model for Haynes' film), Peyton Place, The Man in the Grey Flannel Suit and Imitation of Life, we quickly perceive that something else is going on beneath the placid surface of cocktail parties and pleasant shows of art.

Before we can even say "I've Got a Secret" (the name of the popular weekly '50s panel show), Cathy witnesses her husband in the midst of a passionate kiss with another man. He admits his problem, of course, and is determined through the help of a psychiatrist to overcome his homosexual "predilections." But only a few scenes later, after continuing to work late most nights and consuming enormous amounts of alcohol, Frank, we perceive, isn't succeeding in his "transformation."

A vacation imposed upon him by his employers sends the lucky/unhappy family to Miami, where he meets up with another man, this time falling in love. A divorce is the "reward" for his painful admission of his new love to his wife.

Meanwhile, Cathy has befriended her Black gardener, Raymond Deagan, who not only creates beautiful flower arrangements, but is able to intelligently comment on Joan Miró and other painters in a local art show. He is also a gentle listener, particularly for a woman who has no others with whom she can communicate her marital problems. But Hartford, like any good 1950s city, is abuzz with gossip of their interracial friendship, and the women of her set have telephoned one another with the shocking news almost before she has returned home. Their condemnation only further assures her isolation as she is forced to fire the man upon whom she increasingly has come to depend.

Soon after Raymond's daughter is hit with a rock thrown by malicious boys, punishing the child for the father's apparent infraction of the rules. When Cathy hears of the news, she runs to his side, but he, too, now foresees no future in their love. He is leaving for Baltimore, and suggests to Cathy that life would be no better for them there than in Hartford: "I've learned my lesson about mixing in other worlds. I've seen the sparks fly. All kinds."

I wonder, however, how anyone could describe this picture, as many critics did, as representing a "cruel honesty" (Geoff Andrew, Time Out) about "the repressive taboos of a past decade" (Judith Egerton, Courier-Journal). For, while we all know that, for many, such taboos did and do still exist (we need only remind ourselves of the recent outing of evangelist Ted Haggard, who also, incidentally, is attempting to change his sexuality through psychiatry) that such things have happened, it almost appears as if, in his homage to this period, Haynes is not simply reiterating those facts, but reviewing them through a lens of nostalgia. Any truths this film reveals are "cruel" only because the writer and director make no attempt to comment on them.

I think I have made it clear by this time in my several volumes of My Year, moreover, that I do not see the 1950s as the void of hypocrisy that Hollywood has long portrayed it as being. While there was—just as today—open racial bigotry, homophobia, and sexual role playing and stereotyping, there was much else going on. Indeed, throughout the decade there was a growing repeal in state after state of anti-miscegenation laws; and in 1958, only one year after the events supposedly portrayed in Far From Heaven, Hannah Arendt passionately wrote that the right to choose a mate is "an elementary human right": "Even political rights, like the right to vote, and nearly all other rights enumerated in the Constitution, are secondary to the inalienable human rights to 'life, liberty and the pursuit of happiness' proclaimed in the Declaration of Independence, and to this category the right to home and marriage unquestionably belongs." By 1967 the Supreme Court, in the case of "Loving v. Virginia," struck down anti-miscegenation law in Virginia, responding in language very similar to Arendt's; and most Southern states—the last bastion of such laws—quickly followed.

If Haynes was truly interested in these issues, one wonders why he didn't more thoroughly explore them. Perhaps by following Frank Whitaker's relationship with his male lover, we might discover how his life was changed for better or worse. If Cathy had been allowed to make the decision to join Raymond Deagon in Baltimore, we might discover more about the dangers or possible joys of an interracial marriage. As presented in this film, there is no future for either Cathy or her totally ignored children (throughout the film they are repeatedly told to go upstairs and be quiet, both Cathy and her husband abusing them through silence). Her final train station wave to Raymond is a goodbye to any possibilities of love, leaving its audience with nothing to say or do but wipe away a tear or two and "tsk" the situation away.

One has to ask, why in 2002 is a film director interested in merely representing a past that primarily existed only in Sirk's and other such directors' imaginations. At least we can understand why filmmakers such as Sirk carefully tiptoed around these explosive issues of the day. Haynes' refusal to speak out now seems, at best, a coy retreat into those beautifully colored fantasies.