Clarence Brown | Flesh and the Devil 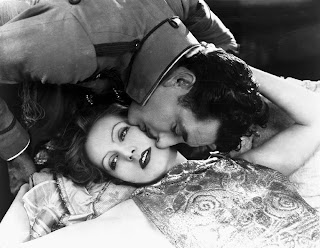 the island of friendship

Benjamin Glaser (screenplay, based on the play The Undying Past by Hermann Sudermann), Marian Ainslee (titles), Clarence Brown (director) Flesh and the Devil / 1926

On the surface, Brown's film, Flesh and the Devil, is the perfect vehicle, it would seem, for the matinee favorites of the day, Greta Garbo and John Gilbert. In fact, the two fell in love, so it is reported, doing the shooting of the film and moved in together, planning to marry.

Their love scenes are well done and, at moments—particularly when the two characters, Leo von Harden and Felicitas von Rhaden meet at a party, he attempts to light a cigarette, which she quickly blows out—are romantically successful, although Brown leaves most of the sexual action to the viewer's imagination. And accordingly, many commentators have dismissed this silent film as being filled with torrid stares and longing gestures instead of dramatic action. Certainly if heterosexual passion is what one is looking for and expecting in the film, one will be disappointed. Garbo and Gilbert are beautiful together, but do not create a significant sense of sexuality, although a later scene in which Felicitas turns the communion wine vessel to drink from the exact place from which von Harden has just drunk, might flutter some hearts.

They hardly get a chance, in fact, to declare their love for one another before Felicitas' absent (and unreported) husband returns, a day early, to discover them in an embrace. A duel is demanded, and the young military man easily kills the count. To protect Felicitas the two man have agreed that the duel was the result of a card game.

The scene that portrays the shooting, however, is for more brilliantly realized—shot as distant black silhouettes—than are the love scenes. Von Harden is shipped off by the plot to Africa for five years, pleading with his dear friend Ulrich von Eltz to take care of her in his absence: "When you know Felicitas better you will love her too."

Hardly has he left the stage than Ulrich does get to know her better, marrying her. His gift of a beautiful necklace nicely encourages her into the relationship, as we increasingly begin to suspect that Felicitas uses her beauty to acquire other things than love. Certainly the wealthy von Eltz is a good catch.

The film has begun with the two male friends in military quarters, von Eltz awakening and reaching up to the bed over his head to feel for his friend, von Harden. No one is there, and it is apparent that his buddy has disappeared for the night. Yet he is willing to lie for him when the role call comes. He is also punished, along with von Harden, when their deceit (von Harden pretends to be sick) is discovered

Later, upon questioning von Eltz why he refers to a small island in the lake near their castle, as "The Island of Friendship," we witness a flashback where, with a young neighbor girl, Herta as witness, the two have exchanged blood, forging the lifelong friendship we have just witnessed.

Von Harden was to have remained in the legion for five years, but with Ulrich's help has been freed after only three years, and now returns home, impatient to once again take up his love affair with Felicitas. But the "happy" widow has kept information from him once again, failing to mention that she is now married to von Eltz.

Discovering that news brings a kind of tension between the two dear friends, creating new difficulties for von Harden who feels he must now give up not only the love of Felicitas but the love he feels for von Eltz. All of this is helped along by the busybody priest who insists that Felicitas is in league with the devil:

When the devil cannot reach through the spirit, he creates

a woman who can reach us through the flesh.

Gradually the great beauty of Felicitas is represented more and more in the context of an evil, creating a aura of misogyny throughout the work, an issue even more apparent in Sudermann's original text. As the film progresses and von Eltz increasingly suffers over the seemingly inexplicable loss of his friend, the perceptive viewer might begin to suspect that the two men's friendship is far deeper than their youthful commitment.

Indeed, Lars Hanson is nearly as handsome as von Eltz as is Gilbert's von Harden, and their scenes together are far more exciting than the early romantic interludes with von Harden and Felicitas. It is almost impossible, moreover, to imagine von Eltz having sex with his beautiful wife.

Gradually the tension between the love he holds for von Eltz and Felicitas leads Leo von Harden to suffer what today we might describe as an emotional breakdown, as he attempts to strangle Felicitas, witnessed by von Eltz as he suddenly appears in the doorway—not unlike the Count's earlier sudden observation of Leo and Felicitas's embrace. Another duel is demanded, and the next morning the two set off to their "Island of Friendship," presumably to kill each other.

Regretting her intrusion into their former relationship, Felicitas runs toward the island across the now-frozen lake to demand they stop the duel, but falls through a hole in the ice before she can reach them. Upon seeing each other, the men themselves realize the stupidity of their behavior, von Eltz now suddenly perceiving the reasons for his friend's behavior, and von Harden realizing that he should have admitted his past. At nearly the same moment that Felicitas drowns, the two men embrace.

Now I know some might accuse me of reading too much into this film's male-bonded ending, but I cannot help but see it, particularly after reading the far-more homoerotic Sudermann work upon which it is based, as a statement of homosexual love. It is as if the script were declaring, "now that the bitch is dead, these two loving men are free to come together once again." The devil is clearly a woman who has come between two male lovers. Once we perceive that, we can well understand why Brown focused less on the early love scenes. They were clearly mere infatuations! Their sacred "island" isolates them from the love of all others.

Posted by greenintegerblog at 8:57 AM