Leigh Brackett (screenplay), based on a novel by Harry Brown, Howard Hawks (director) El Dorado / 1966
Seven years after filming Rio Bravo Howard Hawks produced the second film of his late Western trilogy, El Dorado, a movie, as countless reviewers and film historians have pointed out, extremely similar to the previous one. Here too, a Sheriff (J.P. Harrah, played by Robert Mitchum), in need of help to protect his small community, gains the support of an older deputy (Bull Harris, humorously played by Arthur Hunnicutt), a former friend and top gunman (Cole Thornton played by John Wayne), and a younger man who becomes involved in the acts almost by chance (Alan Bourdilllion Traherne, nicknamed Mississippi, played by a youthful James Caan). The only superficial difference in the two films is that this time around the Sheriff, himself, has become the alcoholic—also on account of a "no-good" woman—allowing Thornton/Wayne to step in as a kind of symbolic sheriff. Together this foursome, spurred on by the love of a local saloon operator, Maudie (Charlene Holt), returns the town to order through a shootout between Bart Jason and his men, who are trying to take over the water rights of another local rancher-family, the MacDonalds.
The various vagaries of the plot, the fact that Thornton refuses to sign on as Jason's gunman and accidently shoots one of the MacDonald boys, are of no great importance, for, once again, the theme here is friendship and the love and heroism it evokes. Indeed, as in the earlier film, the relationship between the men is embedded in a series of comical homoerotic metaphors. After an encounter with hired gunman Nelse McLeod and his gang, Thornton insists Mississippi wait with him while he warns McLeod and his men not to sign on with Jason. After insisting twice that the impatient young man wait with him in the bar, Mississippi blurts out, "Would you mind telling me why you have such a great passion for my company?"
Thornton has, in fact, saved his life; had he left the bar alone others of McLeod's gang would have shot him down in the street. By saving his life, moreover, the two men are symbolically wed. Before long, Thornton, insistent upon going it alone, is joined in his journey back to El Dorado with the young man. As they head into town, Mississippi asks Thornton, 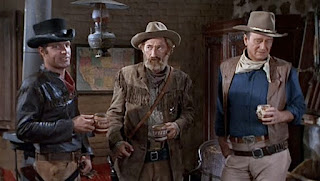 "Well, where are we headed?
Cole: To see a girl.
Mississippi: To see a "girl?"
Cole: Yes, a girl! Don't you think I could know a girl?
And when the two men are sworn in as deputies by Bull, the script even presents us with a metaphoric wedding ceremony:
Bull Harris: Now, raise your right hand [they do as they are told]
I forgot the words, but you better say "I do!"
Cole and Mississippi: I do!
If in Rio Bravo the Sherriff and his gunman friend were getting on in years, in this movie Hawks practically turns them into geriatric figures. Thornton is shot early in the film by MacDonald's daughter, Joey, and suffers throughout much of the film from spasms, leaving his shooting hand temporarily paralyzed. Suffering from a home remedy for alcohol cooked up by the enterprising Mississippi, Harrah spends much of the later part of the film doubled over in pain, and, along with Thornton is shot in the leg. The final showdown is hilariously played out as both men hobble down the street on crutches, Mitchum's crutches sported sometimes on his left and, at other times on his right; apparently Hawks shot whatever he felt looked best, and later was forced to add a line to the film noting the inconsistency, as if Harrah suffered not only from gun wounds but Alzheimer's disease. 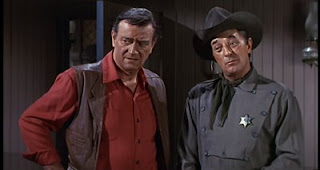 The two sheriffs may save the day, but by movie's end they are in sad shape. The next generation, represented by Mississippi and his potential relationship with the wildcat Western girl Joey, will clearly be different. While these men and Bull fight out of responsibility and honor, Mississippi, freshly in from the Delta, is fighting another kind of battle, a war of revenge. His best friend, a part-Cherokee river gambler has been killed, and over the years he has been seeking out and killing the murderers. This man of the new generation, moreover, does not even know how to use a gun; Mississippi prefers to kill his victims with a knife. Later, joining up with Thornton, Mississippi proves such a terrible shot that older man buys him a double-barreled shot-gun that splatters shots at everything in sight. Quoting Edgar Allan Poe's poem "El Dorado,"* it is clear that Mississippi's relationship to the West is a romantic one, that he sees Thornton as a kind of gallant knight who will soon ride through the Valley of the Shadow. Alan Bourdillion Traherne's refusal to give up his friend's river chapeau for a cowboy hat, makes it clear that, like the trumpet-toting Bull Harris—a remnant of the Calvary and Indian days of the early West—the values and heroism of Thornton and Harrah are almost a thing of the past.
Los Angeles, April 5, 2009
____
*El Dorado
Gaily bedight,
A gallant knight,
In sunshine and in shadow,
Had journeyed long,
Singing a song,
In search of Eldorado.
But he grew old,

This knight so bold,
And o'er his heart a shadow,
Fell as he found,
No spot of ground,
That looked like Eldorado.
And, as his strength,

Failed him at length,
He met a pilgrim shadow;
"Shadow," said he,
"Where can it be,
This land of Eldorado?"
"Over the mountains

Of the moon,
Down the Valley of the Shadow,
Ride, boldly ride,"
The shade replied,
"If you seek for Eldorado!"

Posted by greenintegerblog at 8:17 AM