Leigh Brackett and Burton Wohl (screenplay), based on a story by Burton Wohl, Howard Hawks (director) Rio Lobo / 1970
At times in director Howard Hawk's last film, Rio Lobo, it almost seems as if he is tempting the Hollywood idols. Except for the dozens of brilliantly comic one-liners of Brackett's script, the story is a shaggy dog tale without any "fur" to it. And it's hard to imagine a cast of less convincing actors than the Mexican heartthrob Jorge Rivero (who Wayne addresses as "Frenchy" throughout), Brazilian actress Jennifer O'Neill (Rio Lobo was clearly the best movie of her career), and future studio director, Sherry Lansing! Publisher George Plimpton plays the 4th Gunman. Even Jack Elam (standing in for Walter Brennan and Arthur Hunnicutt) and John Wayne, at his most laconic (in one of his first lines of the film Wayne reports to his soldier friend, "Ned, your neck's broken."), have seen better days. At one point, as the Rebels try to carry Wayne to his horse, they report what is obvious to all: "He's heavier than a baby whale!"
The film begins near the end of the Civil War as Col. Cord McNally (Wayne) and his Union soldiers attempt to transfer a large container of money from one town to another. The Rebels, headed by Capt. Pierre Cordona, whip up a plot to steal the money by greasing the tracks, rigging up trees with ropes, and tossing a hornet's nest into the armored car wherein the Union soldiers are contained. The plot succeeds, and McNally, determined to seek out the Rebels, is captured and forced to lead them out of harm's way. But as he quietly leads them around a Union encampment, he shouts out for the troops, and the Rebels are foiled.
None of these series of high adventures, however, has any major significance for the rest of the film. The War is declared over the moment the rebels are captured, and McNally treats his former enemies to a drink. Their actions, he reasons, were determined by war; the men he's after are the treasonous Union soldiers who clearly betrayed their own forces by leaking information to the other side. Neither of the Rebel soldiers knows the name of the two traitors. McNally charges Cordona and his friend, Tuscarora Phillips to report to him through the sheriff of Blackthorne, Texas if they ever encounter these two men again.
In Blackthorne, McNally awaits the appearance of Cordona, bedded down with a woman. Cordona has evidently encountered the men. Suddenly a gun-toting woman, Shasta Delaney (O'Neill) enters, demanding to see the sheriff: there has been a murder in Rio Lobo. Blackthorne sheriff Pat Cronin reports that it's our of his jurisdiction. Delaney reports, however, that the sheriff of Rio Lobo is corrupt and himself involved in the shooting. A posse from the nearby town arrives to take Shasta away. She shoots one of the men, Whitey, under the table and McNally finishes off all but one of the rest; the final posse member is about to shoot McNally in the back, when Cordona appears, pulling up his pants and shooting the other man dead. Whitey, Cordona reports, has been one of the traitors. 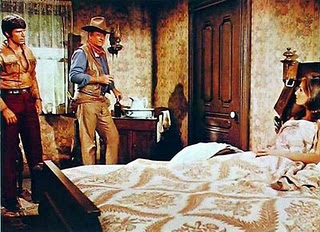 Shasta faints and Cordona insists that she should be taken to his room, as he dismisses the woman with whom he has just shared the bed. Shasta's awakening is one of the most humorous scenes in the film, and best conveys why Rio Lobo works despite its loony storyline and its unconvincing actors:

[Shasta wakes up in Cordona's bed after fainting]
Shasta: What am I doing here?
Cord McNally: Well, you fainted after you shot Whitey, so we put you
to bed.
Shasta: Wait a minute! Where are my clothes? Which one of you took
my clothes?
Cordona: I did.
Shasta: Why?
Cordona: Well, we flipped a coin and I won?
Shasta: Where are your pants?
Cordona: You're sleeping on them.
Brackett, in my estimation, should have won an award just for those lines!
Off go the unlikely trio, McNally, Cordona, and Shasta, to Rio Lobo, 70-80 miles away, to save the day and restore and law and order. We know the formula: the three fall into a kind erotic relationship that strengthens their determination to protect each other, drawing others to their side.
While in the previous two films of Hawks' Western trilogy, Wayne was surrounded by weaker women and men, here McNally is himself a kind of agèd alcoholic, offering a round of drinks at every opportunity and demanding a swig of any liquor he can get. As the three spend the night in an old burial ground, McNally, sitting by himself in the cold, giggles in mysterious delight. Asked what he is so happy about, he answers: "I've had about the right number of drinks. And I'm warm, and I'm relaxed." Awakening the next morning to find Shasta by his side, McNally is startled. Shasta explains that she slept next to him because he was "comfortable." And it is clear that, if he is no longer a hero, he now represents a kind of irritable comfort, a safe place in a world of imminent dangers. 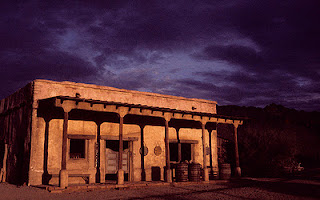 The rest of the story hardly matters. Of course they find graft and corruption facing them in Rio Lobo, as they are met with guns, imprisonment, and hate. A local bully, Ketcham has installed his man, "Blue Tom" Henricks as sheriff, and is trying to overtake the farms about. Tuscarora, Cordona's former Rebel partner, has been arrested on trumped-up charges. Visiting Ketchum's farm, the three overcome Ketcham, upon which Cordona reports that he is the second of the traitors. Forcing Ketcham to sign over the deeds of the stolen farms, McNally and his friends temporarily win the day. But, soon after, Cordona is taken by the bully's gang and an exchange, Ketchum for Cordona, is arranged. The local farmers join McNally and Delaney in the standoff, as Cordona dives to safety into a nearby river, and the evil gang is destroyed. Paralleling the plot of El Dorado, McNally, who has been shot in the leg, walks off using his rifle for a crutch, while Amelita (Lansing) runs forward to help him walk.
Few critics, with the exception of The New York Times' Roger Greenspun, appreciated the film. And Greenspun's faint praise, "the movie is close enough to greatness to be above everything else in the current season," evidently produced a flurry of angry letters. Despite Hawks' apparently lackadaisical attitude about his last film, the work is extremely amusing and was one of the biggest earning films of 1970.
Los Angeles, April 18, 2009
All three essays reprinted from Green Integer Blog (April 2009).
Posted by greenintegerblog at 8:03 AM