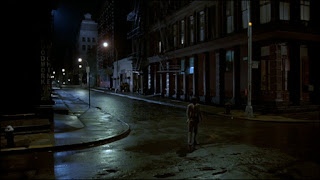 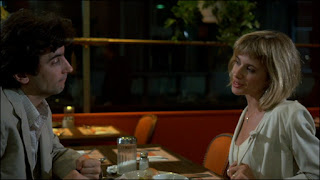 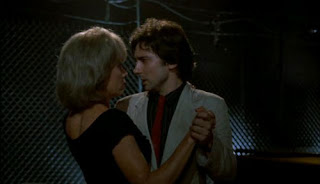 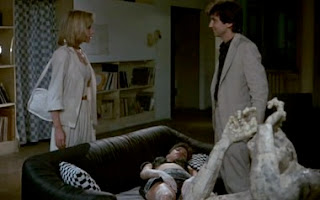 
Joseph Minion (screenplay, based, in part, on a radio monologue by Joe Frank), Martin Scorsese (director) After Hours / 1985
Martin Scorsese's 1985 film, After Hours, begins as a kind of romantic comedy in league with the two I have already discussed. Scorsese's standard use of city lights and rain-reflected surfaces, moreover, bares a great deal of resemblance to Coppola's and Rudolph's Sirkian settings.
But after the first opening scenes, in which computer programmer Paul Hackett (the likeable Griffin Dunne) meets Marcy Franklin (Rosanna Arquette) at a local cafe, deciding to call her—ostensibly about his desire to purchase her friend's Paper Mache sculptures of bagels—and agreeing to meet her in a SoHo loft, things begin to happen that are darker even than the edges of Rudolph's film. While After Hours flirts with the romantic comedy genre, its tone is far closer to Kafka (a scene from whom appears in Hackett's encounter with a nightclub bouncer later in the film). And while both One from the Heart and Choose Me have quite preposterous plots, After Hours presents us with a pure fantasy.
Early in the film Marcy tells Paul of her sexual experiences with her former husband, who was obsessed with The Wizard of Oz and could not help himself from shouting, upon orgasm, "Surrender, Dorothy!"
Marcy: Instead of saying something normal like, "Oh, God," or
something normal like that, I mean, it was pretty creepy! And
I told him I thought so, but he just, he just couldn't stop, he
just, he just couldn't stop, he just...couldn't stop.


Without being too literal in its connections, in fact, After Hours might be said to be a updated version of that great American fantasy, wherein Hackett becomes a desperate Dorothy after a whirlwind taxi ride that ends with his landing in a strange new place where everything he knows is turned upside down. In Minion's somewhat perverted and misogynist retelling of the tale, the witches are closer to man-eating S&M harridans (Kiki Bridges [Linda Fiorentino] and Gail [Catherine O'Hara], with their flying monkeys represented by the SoHo vigilante mobs in search of a victim.
The Scarecrow without a brain, the Tin Woodman without a heart, and the Lion without any courage are perhaps encapsulated in the one central figure, Paul, rather than split into parts. But the images of fire, air, and water which dominate The Wizard, are all here, in the mysterious references to burn victims by Marcy and Kiki, the miserable rain-storm which Paul must endure and in the overflow of the bartender's Tom's toilet, and in the air-headed desperation of waitress Julie (Teri Garr) and the mad Mister Softee truck driver, Gail.
Like Dorothy, all Paul wants to do, as he explains over and over, is "to go home." But having lost a $20.00 bill—his only cash—and having not even enough change to pay for the fare (hiked at midnight) for the subway, he is unable to escape, and is forced to remain in this world that seems, as Marcy has put it, "unable to stop." No one sleeps in this Oz.
If, in fact, the original Baum story is an allegory against the Gold Standard and the greed of the Wall Street millionaires, we recognize that Scorsese's story is also centered about the haves and the have-nots. The robberies taking place throughout this SoHo neighborhood are being committed by an unlikely pair, Pepe and Neil (Cheech Marin and Tommy Chong), who are clearly just attempting to survive—although in Minion's satiric version, even they, like nearly all the citizens of this neighborhood, are mostly seeking art:

Pepe: Art sure is ugly.
Neil: Shows how much you know about art. The uglier
the art, the more it's worth.
Pepe: This must be worth a fortune, man.

If art is money in this world, it appears that it is only through "art," in a creative re-envisioning of the world, that one can find a way "out," the way to survive. The trouble with Paul is that he has no imagination—in short no brains, no heart or empathy, and no moral courage—although, as in the original, he eventually proves that he has all these qualities. His ridiculous attempt to find an easy "lay" ends up in her death and his own entrapment. The SoHo figures may look ridiculous, but in their S&M outfits, their 1960s hairdos, their absurd Mohawk haircuts, they are at least attempting to remake themselves into something else; they are creating a kind of kitsch—or we might say, populist—art. In this world, Paul is nothing, like his almost empty apartment, is too bland to survive.
If there is a Glinda in this tale, a Good Witch, it is the near-invisible June (Verna Bloom), who sits each night drinking in the raucous noise and filth of the Club Berlin, and lives in a basement apartment beneath it. Touched by Paul's kindness, she takes him into her cavern, transforming him from a human being into an artwork that looks similar to Kiki's Edvard Munch-like image of The Scream. Of course, Paul, entombed by these layers of Paper Mache, is screaming out for help, but can no longer be heard. The robbers snap him up the moment June has left the room, Neil proclaiming the absurd truism of this world: "a television is just a television; art is art!"
Undergoing another cyclonic voyage, Paul, now as an art work, falls from the truck precisely where he has begun his voyage, at the front gate of the company where he works. Like a mummy come to life, he cracks open his shell, marching to his desk to be greeted, like a friend, by his computer: "Good morning, Paul!" Surely he must ask, after what has had to be the longest night of his life, as Peggy Lee has in her song played in the film only a few moments earlier: "Is That All There Is?"
Los Angeles, October 16, 2011
Posted by greenintegerblog at 8:03 AM