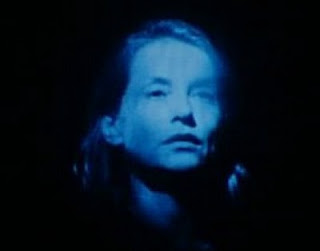 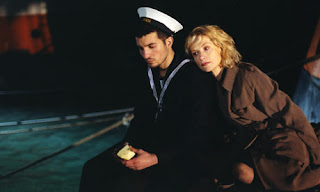 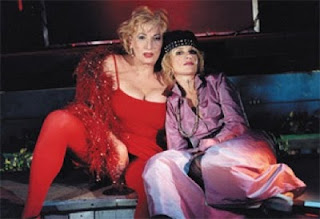 Without making apologies for my inability to accomplish what my role as a critic might entail, I must admit it is, nonetheless, nearly impossible to coherently discuss Werner Schroeter's fascinating film of 2002, Deux.
In every sense of the word, the film is a kind of double spiral, not unlike Hitchcock's Vertigo in its structure, but without having the plot developments of the earlier work. Isabelle Huppert plays two young women, twins, Magdalena and Maria, the former of whom learns of her twin—from whom she is has been separated at birth—through the discovery of a postcard cast into the wind by her mother (Bulle Ogier) from a seaside town in Portugal. Growing up with her adoptive mother (Dominique Frot), Magdalena has apparently been the perfect schoolgirl, who later experiments with lesbian sex, while Maria has run off to Marseille to become a singer, encountering there a man (Philippe Reuter) who has connections at the opera. The two somewhat opposing identities become the focus of Schroeter's film, but once he has set the idea of the doppelganger in motion, it is hard to know whether the stunning images that he presents us with are in the past, present or the future, are the experiences of Magdalena, Maria, or even their mother, or whether they are imaginary or real.
In some senses, it doesn't really matter, for the film is a kind of collective experience of these two young women growing up in a post World-War II environment. The pulls of this tale are, accordingly, love and death, as each of the women explore sexuality, often in obsessive ways, attempting to fulfill themselves in a world in which death is omnipresent, and is often connected to the search for pleasure. A sad young, beautiful bicycler encourages Magdalena/Maria to ride his bike, inviting her to visit him. But a few days later his body is discovered hanging, an apparent suicide. A mysterious murderer stalks women throughout the city, leaving their disemboweled bodies with a flower upon their breasts. An apparent orgy is imagistically transformed into a mass of dead bodies, which cannot help but remind one of the gas chamber carnage of the Second World War. Sexual encounters which begin with simple flirtation, pulls growing groups of boys and girl into these women's presence as if they were magnets for sexual satisfaction.
At a local bar, inhabited primarily by soldiers and sailors, a small Black gospel chorus is joined by a drag queen, who sings lead, as his cock dangles in and out of his black, sequined dress while full bosomed women crawl about the floor in front of them, exposing their breasts—calling up images from Jack Smith's Flaming Creatures. As we do in Smith's hilarious vision of a "comedy set in a haunted music studio," so does Magdalena/Maria break out in laughter.  One of the twins cooks a roast chicken and invites a fox in from the outside to consume her dinner; soon after he becomes her pet which she takes with her even to the opera, and who later attacks her, nipping at her throat and fingers.
Whether or not the viewer can make "sense" (if he must make sense) of Schroeter's hundreds of beautiful tableaux, we easily recognize the psychological and symbolic power of the director's images. This is a world of deep sensuality and possible love, filled with horror and terrific presages of death. It is nearly impossible to separate the two, and the search for a wholeness of self that might steady the individual being is mostly fruitless.
In the end Magadalena/Maria must kill off—symbolically at least—the other, accepting all that other has had to give (in Schroeter's powerful image it is represented by swallowing her vomit), while burying her to achieve peace. The incomplete being, dreaming, hoping, seeking—a romanticized vision of humanity—is all, Schroeter suggests, we have available to us. We are, accordingly, terrible failures as human beings; but, ah! what beauty our aspirations have wrought!
Los Angeles, October 17, 2011
Copyright (c) 2011 International Cinema Review and Douglas Messerli
Posted by greenintegerblog at 10:03 AM