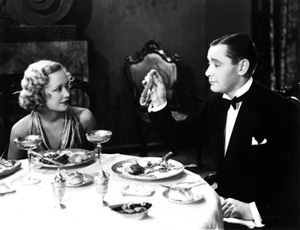 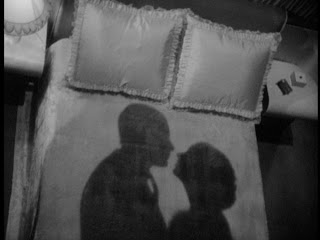 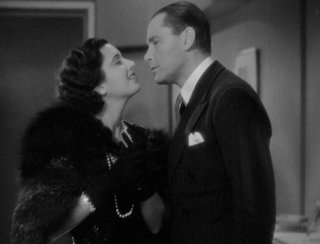 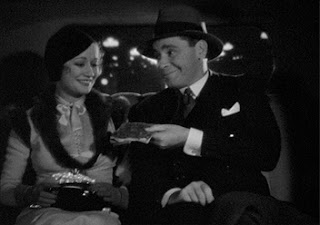 world of lies
by Douglas Messerli

Samson Raphaelson (screenplay, from a play by Aladar Laszlo), Grover Jones (adaptation), Ernst Lubitsch (director) Trouble in Paradise / 1932
Perhaps director Ernst Lubitsch's greatest film, Trouble in Paradise is a comedy of deception. No one in this film, except perhaps for the garbage collector seen at the very beginning of the movie, lives a life of honesty. And even the garbage man tosses his collections into a gondola and rows off singing "O Sole Mio" as if he were rowing down the Venice canal with a romantic couple.
Soon after we are introduced to a dapperly dressed, well spoken man, whom the waiter addresses as Baron, but who, in reality, is Gaston Monescu (Herbert Marshall), a pickpocket and thief who has just relieved François Filiba (the perpetually, slightly-befuddled Edward Everett Horton) of 20,000 lira, and is best known as the man who "walked into the Bank of Constantinople, and walked out with the Bank of Constantinople." He is awaiting Lily (Miriam Hopkins) and is pondering how to court her:
If Casanova suddenly turned out to be Romeo having supper with
Juliet, who might become Cleopatra, how would you start?


The waiter replies: "I would begin with cocktails." The camera pans down to the canal, where a woman, looking very much like a royal Cleopatra, is drifting toward Gaston's hotel.
The beautifully dressed Lily presents herself immediately as one of the Venice aristocracy, spending the first few moments of her arrival worrying over whether or not she has been seen entering the hotel, and, upon turning the conversation to her host, immediately attempts to put him in his place:
Lily: You know, when I first saw you, I thought you were an American.
Gaston: Thank you.
Lily: Someone from another world—so entirely different. Oh! One gets
so tired of one's own class—princes and counts and dukes and
kings!
Gaston: Disappointed?
Lily: (with a beckoning look up at him) No, proud. Very proud.
(He descends for a kiss.)
News of the robbery in the royal suite has already spread, and as the couple begin their dinner, chatting easily with one another, they discuss the event:
Gaston: That's hotel life. In one room a man loses his wallet, and in
another, a man loses his head.
Lily: Please! When I came here, it was for a little adventure, a little
game which you play tonight and forget tomorrow. Something's
changed me; and it isn't the champagne. Oh, the whole thing's
new to me. I have a confession to make to you, Baron, you are a
crook. You robbed the gentleman in 253, 5, 7, and 9. May I have
the salt.
Gaston: (as he passes the salt) Please.
Lily: Thank you.
Gaston: The pepper too?
Lily: No thank you.
Gaston: You're very welcome, Countess, believe me, before you left
this room I would have told you everything. And let me
say this with love in my heart. Countess, you are a thief.
The wallet of the gentleman in 253, 5, 7, and 9 is in your
possession. I knew it very well when you took it out
of my pocket. In fact, you tickled me. But your embrace
was so sweet.
A moment later he stands, pulls the curtains closed, and goes to Lily as if to hug her, but shakes her, instead, like a rag doll, the wallet falling to the floor. As the couple sit down again, it is apparent that whole discussion has been a kind foreplay to sex, and in the next few moments, they fall further in love as each attempts to outdo the other, Gaston pulling her brooch from his pocket, she returning his "reset" pocket watch, he kissing her stolen garter. It is love at first sight. As Gaston summarizes it: "I love you. I loved you the moment I saw you. I'm mad about you. My little shoplifter, My sweet little pickpocket. My darling." The two talented deceivers have fallen in love. Soon after, a hand reaches around the hotel room door to put out a "Do Not Disturb" sign. So the director announces that they are consummating that love.
Time passes, and the couple are now in Paris, a bit low in their finances. At the opera they steal a diamond-covered purse from the wealthy Madame Mariette Colet (Kay Francis), heiress of the Colet Perfume Company. In its advertisements the company itself announces Lubistch's theme of deception: "Remember, it doesn't matter what you say, it doesn't matter how you look, it's how you smell." Apparently even the garbage man might hide his identity if he smells right!
So fond is Madame Colet of her purse that she offers a reward for it, and the couple, realizing that the award is more money than they could get by selling the purse, decide to the return the object. As he arrives in the Colet mansion, the front room is filled with other pretenders, waiting, obviously, to present false purses. A Communist intrudes upon the gathering, denouncing Madame Colet for having spent so much money on a simple purse, while confirming for the audience her diffidence for reality.
Gaston enters with the "real" object, saving her from further abuse. However, even he is critical of her makeup, the shade of her lipstick, the color of her powder. And he too—when she cannot even find her checkbook to pay him, and she admits that she keeps only a small amount of money in her safe—criticizes her handling of money. Just as in the conversations in the first scene between Gaston and Lily, he and Madame Colet speak on one level and act on another, she falling in love with him while he scolds:
Gaston: Madame Colet, if I were your father, which fortunately
I am not, and you made any attempt to handle your
own business affairs, I would give you a good
spanking—in a business way, of course.
Madame Colet: What would you do if you were my secretary?
Gaston: The same thing.
Madame Colet: You're hired.
So begins the "trouble" in paradise, as the couple, Gaston as secretary and Lily as his assistant, move into the Colet mansion, with the intent, it is clear, of robbing her blind. To discover her true worth, Gaston orders an inventory, and demands a weekly sum of money to be placed in her home safe. The family trustees are outraged, but she supports Gaston, having truly fallen in love. She even offers Lily 50 francs to help steer Gaston to her, which Lily reports back to her lover:
Gaston: Well, what did she want?
Lily: You. And she's willing to pay as high as 50 francs.
The two decide to speed up their robbery, stealing the money that very night while Madame Colet attends a dinner.
But as she calls for a cab, Madame Colet turns back, hoping that she might lure Gaston into her room or she, enter his. Much of the evening, in fact, is spent calling for and sending the taxi off. Just as Gaston confessed to Lily, Madame Colet, turning the confession inside out, tells Gaston;
Madame Colet: I have a confession to make to you. You like me.
In fact you're crazy about me.


Indeed, he is, and Lily, aware of his infatuation returns, robbing the safe of 100,000, before returning it to Madame Colet as a kind of ransom for Gaston. Gaston saves the day by revealing that what they had attempted to steal had been a pittance compared to the millions that have already been stolen from her by the company trustees.
Lily leaves, angered and hurt by Gaston's faithlessness, planning to go it alone.
He, in turn, also makes a confession to Madame Colet: "I came here to rob you, but unfortunately I fell in love with you." But, in fact, it is Lily whom he truly loves, and he soon follows her, reporting to the heiress:
Gaston: It could have been marvelous.
Madame Colet: Divine.
Gaston: Wonderful... But tomorrow morning, if you should wake
out your dreams and hear a knock, and the door opens,
and there,instead of a maid with a breakfast tray, stands
a policeman with a warrant, then you'll be glad you are
alone.
He takes only a pearl necklace as a gift for Lily.
The last scene shows Lily and Gaston in a taxi, skipping town. As he reaches into his pockets to present Lily with the pearls, he discovers they are missing, as Lily holds them up, dropping them into Madame Colet's stolen purse. Gaston takes 100,000 franc banknotes, formerly in Lily's possession, and drops them into her purse. The two deceivers have once again have proven themselves in a world that survives on thievery and self-deceit. Their final hug of love and her cry of delight, "Gaston!" are perhaps the film's only genuine acts.
Los Angeles, New Year's Eve, 2011
Posted by greenintegerblog at 7:54 AM