Pedro Almodóvar | Todo sobre me madre (All About My Mother) 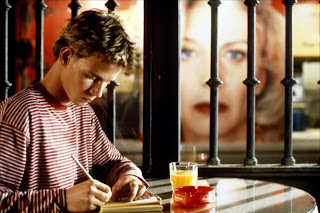 After hearing of the great actress, Celeste Holm’s death yesterday, I reached for, in of our numerous selves of DVD’s, the film, All About Eve, just to watch her excellent performance in that work. Not so long ago, I’d reviewed Gentlemen's Agreement, so I felt Eve would be a nice addition to my ongoing film discussions (I'd written a short piece about it, in a work about the fate of women actors, some time before). Alas, we evidently to do not own that movie, although I have seen it on dozens of occasions. Next to where it might have stood, however, was our copy of Almodóvar’s All About My Mother, a movie I hadn’t seen for a long while, which I instinctually felt might be a good alternative. 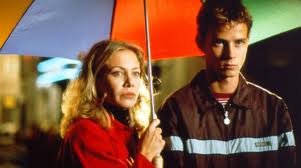 I had forgotten, in fact, that the Almodóvar film begins with the young son, Esteban (Eloy Azorín), watching the scene from All About Eve in which the Holm character introduces Anne Baxter to Bette Davis. Soon after, in the Almodóvar film, his mother gives him a birthday gift of Truman Capote’s Music for Chameleons, and by the next scene the two, mother and son, are attending a production of Tennessee Williams’ play A Streetcar Named Desire. Although the stylized production from which Almodóvar shows us scenes, looks quite moribund as a theatrical event, it is clear that the starring actress, Huma Rojo (Marisa Paredes) and the play are favorites of the young Esteban, evidently a budding young gay boy. So enamored with Huma is Esteban that he waits in the alley after the play hoping to get her autograph, and when her car speeds by without acknowledging his request, he chases after. Moments later he is hit and killed by another car.


So begins the tragic series of events that might be defined as the trail of “blood on the ground” of his mother Manuela’s life. She has told Esteban nothing of his father, but had promised him she would reveal information the next day. It is now too late, and, in mourning, Manuela follows her son’s donated body parts to the new recipient and follows the tracks of her life back to Barcelona from where she has originally come. As in many an Almodóvar film, it is the journey that leads to self-perception and, in this case, reconciliation with an outré past that Manuela has tried to put behind in order to build a more normative life for her and her young boy—a past that includes prostitution, drugs, lesbianism, transvestitism, and AIDS. 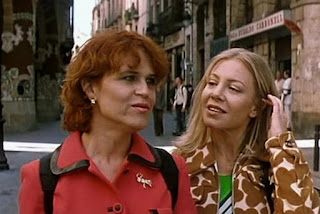 We realize in the very first scenes in Barcelona just how different has been Manuela’s past was from the productive life she lives in Madrid as a nurse-teacher, helping her fellow employees to learn how to obtain permission from victims’ families to donate their loved ones’ body parts. Taking a taxi to an isolated circle round filled with drag queens, transvestites, and whores, Manuela discovers an old friend, the transvestite, Agrado (Antonia San Juan), being robbed and beaten. With Manuel’s help, Agrado is freed, and the two turn to a local nun to seek employment, but mostly in order to get Agrado off the streets. The nun, Hermana Rosa (Penélope Cruz), tries to find employment for them in her mother’s house, but her mother, a harsh critic of Hermana’s activities and her friends, refuses. A few days, later, however the tables are turned, as Hermana, realizing she is pregnant, begs for a room in Manuela’s newly rented apartment.


As anyone who has seen an Almodóvar movie might suspect, coincidences abound; and we soon discover that the father of her child is Lola (Toni Cantó), the father also of Manuela’s Esteban, Lola being a transvestite who has continued to practice heterosexual acts and who has also been Agrado’s roommate. As Manuela summarizes the bizarre sexual situation: “How could anyone act so macho with a pair of tits like that?” 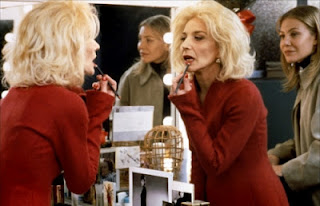 Attending a Barcelona performance of the Williams’ play she and her son have seen the night of his death, Manuela insinuates herself in the life of Huma and her drugged-out actress lover, Nina, who plays Stella in the drama. When Nina fails to show for one performance, Manuela, who has played the role in amateur productions as a young woman, goes on for her, creating even closer bonds between Huma and herself. Ultimately, Agrado takes over Manuela’s role as Huma’s secretary, while Manuela turns her attention to Hermana, who has now discovered that through Lola she has been infected with HIV.


In short, Almodóvar creates in All About My Mother a strangely interrelated group who, together stand against the normality in the world outside of theirs, but serve each other almost as a tightly-knit, maternal family—substitutes, perhaps, for their own failed family ties. When Hermana dies in childbirth, Manuela adopts the child, caring for it in the very house from which Hermana’s mother had originally rejected her. But when the mother observes Manuela showing the child to a transvestite, the returned Lola, she is outraged. With the patience and forbearance that Manuel has shown throughout, she explains that the man-woman is the child’s father. Hermana’s mother is horrified, afraid even to touch the child for fear of contracting AIDS. Even the forgiving Manuela perceives the situation; as she puts it to Lola: “You are not a human being…Lola. You are an epidemic.”

Once more, accordingly, Manuela leaves Barcelona without saying goodbye, this time to return two years later for an AIDS conference where she reveals that the baby is now completely AIDS free.


In the end, of course, we have discovered nearly everything we need to know about Esteban’s mother, but where is Esteban in all this? Dead of course, having learned nothing of the truth the viewer has received. Even Lola, finally told of Esteban's existence, dies soon after, so that we can wonder to where the center of perception has shifted. Obviously, it is Manuela, through her memories of her first son, and the process of raising the second, for whom the encounters in the film have any true meaning. What she has been seeking throughout the film in her returns to Barcelona and her bizarre past is not Lola and her old friends, but herself, that part of herself she has destroyed in order to move forward. By film’s end, moreover, the “my mother” of the title is not so much about Esteban’s mother as it is any mother and the truths and lies mothers share with her daughters and sons. The director brings these various loose threads together, when he combines, in a dedication, the various great actresses of the films and plays with all women, all mothers, his own mother:

To all actresses who have played actresses. To all women who act.
To men who act and become women. To all the people who want to
be mothers. To my mother.


That link, in turn, strangely interconnected this film with my own previous discussion of All About Eve in my essay "Life upon the Wicked Stage," a world in which women rarely come to any good.