mining for love
by Douglas Messerli

Mick Jackson’s L. A. Story is primarily a vehicle for Steve Martin and Victoria Tennant, and its humor, like Martin’s own stand-up comedian quips and his other writings, taking easy pot-shots at contemporary culture—in this case, Los Angeles-based—often falls flat. Yet his story of a “wacky” TV weatherman—since real weather seldom occurs in the sun-filled temperate L.A. basin, meteorologists often serve the dual role of on-line jokesters—Harris K. Telemacher (Steve Martin)—a reference perhaps to Odysseys’ son, a man attempting to chart the water without his father’s lessons—whose girlfriend (Marilu Henner) is in search of a voyage up the social ladder.

Clearly bored by his relationship and the attendant luncheons and dinners at which he is forced to be present, Harris is quickly taken with the strangely gouache Londoner who appears late at a L. A. luncheon party, Sara McDowel, who has traveled to the US, apparently, to reconcile with her slightly snobbish and—as it later becomes apparent—gay (he conjures up a male movie star while having sex) ex-husband, Roland Mackey (Richard E. Grant). Her opening comments reveal everything:

Roland: Sara just got off a plane from London.

Trudi: Oh, you must be exhausted.

Sara: Yes, I’m shattered, but it’s nothing that some sleep and

a good fuck wouldn’t cure, as my sister used to say. Ha

Roland: You’ll have to forgive Sara.

Sara: Oh, it was just…a figure of speech. I’ve been on a plane

for twelve hours with a crying baby.

Tom: I'll have a decaf coffee.

Trudi: I'll have a decaf espresso.

Harris: I'll have a half double decaffeinated half-caf, with a twist

Trudi: I'll have a twist of lemon.

Tom: I'll have a twist of lemon.

Morris Frost: I'll have a twist of lemon.

Cynthia:  I'll have a twist of lemon.

The story that follows, filled with a talking freeway sign, a hilariously empty-minded, Venice-inspired L. A. stereotype, SanDeE* (rambunctiously celebrated by Sarah Jessica Parker) whom he meets at a clothing store, and numerous cameo roles by other comedians and other actors (Chevy Chase, Woody Harrelson, Paula Abdul, Martin Lawrence, Rick Moranis, Terry Jones, John Lithgow and Scott Bakula among them) matter only as distractions to his growing infatuation with the tuba-playing journalist Sara. 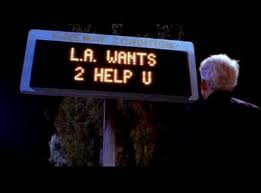 Just as in most of L.A. films featuring rebels, Sara is a true eccentric in a world of innate outsiders who define themselves most notably by trying to “fit in,” parroting the inanity of a culture that has few true insiders. A bit like Woody Allen, Martin scatters his L. A. snipes in all directions, including Harris’ attempt to get a reservation for the outrageously pricey restaurant, L’Idiot, where he is told he must wait days for a 5:30 dinner, and, questioned by a Maître’d, a banker and others, is allowed only a few choices from the menu. 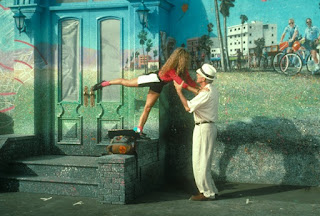 Harris: [calling the restaurant] Hello, L'Idiot? Yes, I'd like

to make reservations for two for Friday. Saturday? Sunday?

well, I don't see how that's any of your... the low fifties.

When Roland later suggests the same restaurant, he is able to obtain a reservation for the same night.

At moments, Martin actually reaches into the heart of the culture, suggesting the complexity and difficulty of mining a world that is so resplendently deserted.

Harris: There's someone out there for everyone—even if you need

a pickaxe, a compass, and night goggles to find them.

Compared with those around them, the wacky weatherman and  journalist are models of sanity, as they ridiculously attempt to hook up with the wrong people, the interfering and bag-pipe-loving freeway sign offering advice and moral insight. And why not? Hasn’t it been created to tell the masses what to do—to slow down, to take alternate routes?

If Los Angeles is a paradise for outsiders—with little of permanence at its core ("Harris: Some of these buildings are over 20 years old.")—then it is natural that Harris and Sara were meant for one another, true Angelenos unable to fit into anyone’s definitions of whom should love whom and how life should be lived.

This is truly gentle satire from a satirist that we all know is quite capable of crashing through the set if need be. And I recall the later parts of this film as being shot in the light of glowing sunsets instead of the bright crystalline sun that oppresses the city almost every day of the year.

The gay reference here is almost ephemeral and used to comic effect only to help establish Sara’s former husband is a closeted gay man—just the opposite of the mean-spirited and despicable AIDS reference to the villain of Eddie Murphy’s comic vehicle Beverly Hills Cop—leaving his ex-wife open to Harris’ advances. 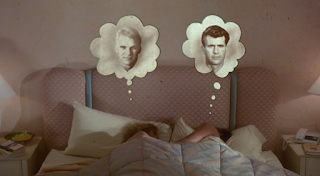 While her ex pictures a handsome man, she wishes she were having sex with Harris (Martin), and so do the two slightly confused individuals of this film fall into each other’s arms by film’s end.

Posted by greenintegerblog at 10:07 AM