Neil Jordan | Not I and Atom Egoyan Krapp's Last Tape

Beginning in 2000, Michael Colgan of Dublin's Gate Theatre and the Irish Film Board determined to film 19 of Beckett's plays and monologues, each directed by a different individual. Directors included Karel Reisz, Anthony Minghella, Damien Hirst, David Mamet, and the two I've chosen below as representative, Neil Jordan and Atom Egoyan. Actors included John Gielgud, Jeremy Irons, Milo O'Shea, Timothy Spall, and Julienne Moore and John Hurt, described below. These films were never put into theaters in general release, but several of them were shown in the 2000 Toronto Film Festival.

Neil Jordan begins his short film Not I, based on the 1972 dramatic text by Samuel Beckett, with a view of a young woman (Julienne Moore) entering to sit upon a chair. Perhaps he just couldn’t resist showing off his actor, but this clearly works against Beckett’s instructions, wherein he writes:

Stage in darkness but for MOUTH, upstage audience right, about 8 feet
above stage level, faintly lit from close-up and below, rest of face
in shadow. Invisible microphone.

The auditor, covered head to foot in a loose black djellaba, is missing from Jordan's film.
From here on, however, Jordan follows the author’s suggestions, turning the rest of the work into a film of the mouth.

The mouth—or the voice—is, in fact, the subject of this work, which concerns an older woman (seventy years of age, we later discover) whose parents, having died or disappeared shortly after her birth, was brought up without love and basic human communication. Throughout much of her life she has seldom spoke, grocery-shopping, for example, by bringing a black bag and a shopping list to the store, and quietly waiting until the clerk puts the articles into the bag.


Suddenly, one April morning, upon hearing the larks, she falls face-first into the grass and, accompanied by an interminable buzz she hears all about her, she begins to talk without stop. The speech she releases into the world seems to be often incomprehensible to her friends, but, despite the constant interruptions between words, the tumble of language she uses to describe herself in the third person, we do gradually come to comprehend her “story.” It is as if all the silence she has previously lived has been let loose as a roar of suffering, a suffering she has not previously felt. In fact, she has felt little, apparently, throughout her life, unable even by the end of her scree to identify herself as single entity. Like a character in a fiction, she describes herself as a figure “out there,” a “not I” with no inward being.

One might read Beckett’s short work as a kind of statement of the writer’s art, the writer being a silent entity until he is forced, “once or twice a year,” to express himself, often without being properly comprehended. And when those words pour out, or the mouth opens to speak, it cannot stop, swallowing up everything, including the self, in the buzz of a created reality.

Moore credibly plays the interruptive mouth, but it is somewhat difficult to watch this mouth in action—despite the three different views the director presents—in such extreme proximity of the camera. In some ways, the busy lips almost become abstract, so focused is the camera upon them. In the theater, where an unspeaking Auditor also stands in the shadows, there is more to distract the audience, even if it is hidden in the shadows. While I was watching this DVD, the movie was appropriately accompanied by a buzzing, a saw in my neighbor’s apartment from their attempts at renovation.

Although I like the theatricality of the moving lips, the gasps, pursings, and poutings of them against the actor’s white teeth, I often felt the need to turn away briefly to relieve myself of the apparent pain they express.

Actor John Hurt's portrayal of Krapp in Beckett's 1958 play put to film is absolutely brilliant, despite he and director's Egoyan's small changes to Beckett's text. The realist setting of the play, with the spots of bright white light, gives a grand theatricality to Krapp's world, a world in which, under the light, he feels safe while being surrounded by darkness wherein, as Beckett himself described it, "Old Nick" or death awaits. On his sixty-ninth birthday Krapp, yet again, forces himself to interact with a younger incarnation. 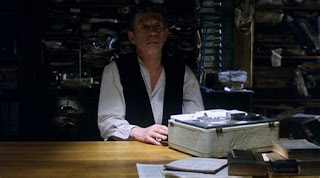 It is clear that Krapp has a fixation with his former selves. For years he has recorded tapes describing his life's events, most of them quite meaningless, but some of them of great poetry and sensibility. The tape Krapp chooses on this particular, rainy night, is "Box 3, Spool 5," the day Krapp turned 39.

Yet Egoyan reveals that what leads up to his playing the tape is as important in some senses as what is actually on the tape itself. The ritualistic acts, Krapp's continual checking of the time, his strange way of eating a banana—he puts the entire banana into his mouth holding it there for a while before biting it off, clearly a bow to the fruit's sexual suggestions—and several of his other actions, including his nearly falling on the banana peel he has tossed into the dark, reveal him as a kind of eccentric fool—in short, the typical Beckett figure. As his name suggests, he is "full of shit."

Hurt presents Krapp with a kind of valor despite his obvious distancing of himself from the human race. Clearly Krapp's mother has been a monster, living for years in a world of "vidiuity"—the condition of being or remaining a widow. The small things he describes are both comical and life-affirming: playing ball with a dog as his mother dies, awarding the ball to the dog as he hears of his mother's death; attending a vesper service as a child, falling off the pew.
Krapp is an everyday man with romantic aspirations, or at least he was, it is apparent, at age 39, the time when we are all have arrived in the prime of life. Krapp at 39 is both a smug bore,

Spiritually a year of profound gloom and indulgence until that
memorable night in March at the end of the jetty, in the
howling wind, never to be forgotten, when suddenly I saw the
whole thing. The vision, at last. This fancy is what I have chiefly
to record this evening, against the day when my work will be done
and perhaps no place left in my memory, warm or cold, for the
miracle that . . . (hesitates) . . . for the fire that set it alight.
What I suddenly saw then was this, that the belief I had been going
on all my life, namely—(Krapp switches off impatiently, winds tape
forward, switches on again)—

a man who will not regret any decision of his life, and is a man amazingly come alive through the love of a woman whom he describes lovingly in a scene where the two lay in a small punt as it floats into shore through the reeds.

The older Krapp, who realizes that his younger self could not imagine the loneliness and emptiness of the life ahead, has no patience at times with his past. His new tape, which he begins after impatiently winding the older tape ahead to escape his previous self's blindness, is filled with bitterness and anger for a failed life:

Nothing to say, not a squeak. What's a year now? The sour cud and
the iron stool. (Pause.) Reveled in the word spool. (With relish.)
Spooool! Happiest moment of the past half million. (Pause.) Seventeen
copies sold, of which eleven at trade price to free circulating libraries
beyond the seas. Getting known. (Pause.)

He has failed, obviously, even in his writing career. Unlike his younger self, so unregretful of his past, the old Krapp is filled with the detritus of his life, all those materials left over from his disintegration. If the younger Krapp declares himself as only moving forward, the elder would "Be again!"

Be again in the dingle on a Christmas Eve, gathering holly, the
red-berried. (Pause.) Be again on Croghan on a Sunday morning,
in the haze, with the bitch, stop and listen to the bells. (Pause.)
And so on. (Pause.) Be again, be again. (Pause.) All that old
misery. (Pause.) Once wasn't enough for you. (Pause.)
Lie down across her.

He gives up this, his last tape (or perhaps simply his latest) to listen again to his former self describing his sexual moment with the woman in the punt.

Director Egoyan represents these last scenes, nearly twenty minutes in length, with a full shot, where the viewer cannot escape the shaft of reality penetrating the darkness around Krapp. Hurt so painfully suffers and loves his former self that one can almost hear his heart crack.