walking away
by Douglas Messerli


To describe Bernie Lootz (William H. Macy) as a loser is to misunderstand the meaning of the word. In order to lose one has to have taken chances, failed in opportunities chosen. Lootz has let his drunken wife carry off his son and passively allowed himself to be involved in petty thievery and finally the mob itself through his “friendship” with Shelly Kaplow (Alec Baldwin), who, to cure Bernie of gambling, has taken a baseball bat to Bernie’s knee, crippling him for life. Bernie’s life has so spiraled downward (the camera shows him “going down” the casino elevator at several points in the film) that he literally emanates failure, the perfect “gift” for a casino “cooler,” a man who, coming even a few feet from winners, immediately sours their luck, whether they are playing the machines or gambling with dice. In one of the first lines of the film a casino employee calls out: “Where’s Bernie, they’re killing us. Yeah, we need him right away.”


Bernie, after having a cup of coffee—the creamer always seems to be empty when he seeks to add any richness to his drink—walks to the table and squelches the man’s luck. 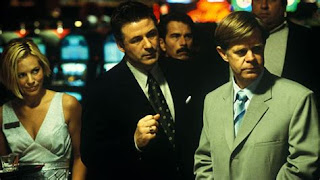 Even at his run-down motel studio apartment, the plants have died and his cat has run away. The neighbors keep him awake each night through sexual romps as they whoop out their pleasures and rhythmically beat out their sexual actions against the wall. Bernie is less a looser than a disaster; as Shelly later describes him, “Lootz is kryptonite on a stick,” a explosion waiting to happen.


For those numerous critics, accordingly, who disliked this film because of being “pretty hokey,” they seem to miss the point. Despite Baldwin’s quite brilliant tough-guy Actor’s Studio-like performance, Kramer’s film is pure fantasy, having as much to do with reality as Las Vegas has to a suburban neighborhood. If the film seems, from time to time, to create a mood of film-noir, it is lit up with the lurid lighting of the Vegas strip. No need to look too deeply into the shadows cinematographer James Whitaker has created.


Even Shelly, the loveable-hateable head honcho of decaying Shangri-La, is, as the smart young gang Ivy-leaguers who argue for a complete makeover of the casino, describe him, a museum piece, an old-timer who believes in the values of the original Las Vegas, presumably the personal bullying he, time and again, employs. No need for such an old-fashioned concept of a “cooler” for them, just paint the walls a mute color, make sure the servers are well-endowed, and play a musical score under which are woven the words: lose, lose, lose. They offer Shelly an architectural rendering of what they see as the new transformation, but Shelley believes that, behind his violent bullying is at least the hope of a truly mystical world of eternal pleasure—in return of which he takes in 135 million each year. His reaction to their kitschy vision of the new Shangri-La is predictable:


Kaplow: [about the Vegas strip] What? You mean that Disneyland
mookfest out there” Huh? Come on, you know what that is?
Huh? That’s a fucking violation is what that is. Something that
used to be beautiful, used to have class, like a gorgeous
high-priced hooker with an exclusive clientele. Then along
comes that Steve Wynn cocksucker and knocks her up and
puts her in a fucking family way. Now she’s nothing but a
cheap, fat whore hiding behind too much fucking make-up.
I look at her and see all her fucking stretch marks, it makes
me want to cry—because I remember the way she used to be.

No matter how Satanic Shelly later becomes, you gotta love a man who thinks like that!


We know, however, that, going against the current, as Shelly does, will ultimately mean his end. He, as several of the film’s characters later point out, is the real loser. Except for his inept gambling, Bernie never even tried, is even now appreciative of his friend’s brutal act.


Yet Bernie, despite everything, still has hope, as deeply buried away as it may be. At the beginning of the movie, almost having paid off his gambling debt to Shelly, he is planning to simply “walk away,” to escape the world of no clocks or windows, the world where there is no time or place in which to live. Attracted to a young server, Natalie Belisario (Maria Bello), who at first understandably ignores his kindness, he is suddenly amazed by her interest in him. A sexual encounter is evidently his first in a very long time, and he can hardly believe his “luck.” He is startled to discover her still with him in the morning.


The relationship between the two gradually begins to deepen, each amazed by the other’s gentleness and seemingly genuine feeling. The writers, however, give Bernie another hit on the head when his no-good son Mikey (Shawn Hatosy) and his lying girlfriend, Charlene (Estella Warren) suddenly show up, she pregnant and the couple without money. 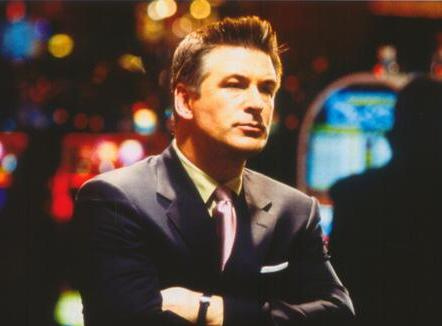 Always ready to play the smuck, Bernie gives them his only savings, $3,000, which they immediately play at a Shangri-La table. Surprisingly, they win, and Bernie’s attempt to cool them this time fails: he’s been having, as he tells Shelly, “on and off” days.


To settle the situation, Shelly politely asks the couple up for a drink in his office, code, as Bernie knows, for the brutal attack in store for them. He has no choice but to intervene, as Shelly begins beating Mikey. When he reveals that the kid is his son, Shelly pounces, forcing him to pay hundreds of thousands for their lives and, simultaneously, indenturing Bernie to him for several more years. Bernie agrees to the ridiculous situation, but not before Shelly destroys both the boy’s knees and kicks the pregnant girlfriend in her stomach to reveal a pillow instead a swollen womb.


Bernie should have known, clearly, that is no way to simply “walk away.” Earlier in the film, the washed up lounge singer Buddy Stanford (Paul Sorvino), after getting his fix, describes to Shelly an animal show he has seen numerous times where the head lion, as he ages, his ousted by younger members of the pride, forcing him to go alone in the jungle and die. If only he could have known, Buddy whimpers, if only he could have walked away to die proudly. Knowing that the upper brass would have killed him, Shelly gives the drug addict a murderous overdose, allowing him to leave without even knowing it. Yet there is clearly no way, once one is involved with the mob, of simply “walking off.”


Despite Bernie’s new problems, however, he and Natalie grow closer, vowing their love to one another. Distressed about her looks, Bernie responds: “Hey. You look in the mirror, you don’t like what you see, don’t believe it. Look in my eyes. I am the only mirror you’re ever gonna need. You look in my eyes, Nathalie.”


As the days pass, so too does Bernie change. The costume designers describe how in the early scenes, Macy was dressed in overlarge sizes that were gradually replaced with more fitting outfits, shirts and ties of more appealing colors. Lighting and make-up gradually turn Bernie into a joyful being. Bernie smiles, almost sings to himself. He now has no affect whatsoever on winners. He is himself suddenly a winner in life. Even his cat returns.


Noting the changes, Shelly calls in Nathalie, who reveals she has fallen in love with Bernie; he warns her away, and for a few hours she leaves, Bernie accepting the handwritten note with the tired forbearance he has all else in his life. She soon returns, however, and his luck grows even stronger. Both are determined, despite their recognition of the near impossibility of the act, to walk away.


A visit to Natalie by Shelley and his henchman, send her crashing into the mirror she was told by Bernie to ignore, badly cutting her face. When Bernie returns home, she reveals to him that she has been paid to be nice to Bernie, Shelley hoping to keep him in Vegas. Nathalie also admits, however, that she has truly fallen in love, handing over the $3,000 she has been paid by Shelley so that she and Bernie might go off together.


Bernie pays a visit to Shelley to tell him of his plans, promising him to continue the payments, so honest is this now lucky man. Yet, Shelley makes clear to him that he will never get away, that if he walks he must die.


As he is about to return to the waiting Natalie, Bernie suddenly decides to gamble with the money, staking everything, once more, on a game of luck. No longer a “cooler,” Bernie is suddenly hot. He wins, wins big, with Shelly forced to attempt the role as the cooler. Returning to Nathalie, Bernie drives off, quite literally, into the sunset. But some ways out of town he must stop, vomiting up all the fear he has swallowed and revealing to her their big winnings.


If it is hard to perceive what Bernie has pulled off as a crime, one must remember that winning such amounts is, nonetheless, treated as a crime in world in which he and Natalie lived. A cop suddenly comes up to the car, orders them out, forces them to their knees and is about to shoot them dead, Shelly and his cronies waiting in a nearby car. Amazingly—one must remember that this film is pure fantasy—a drunken driver, passing by, crashes into both the waiting car and the cop, killing everyone except the doomed couple, who now truly can walk away.


Back in Las Vegas, the Ivy-League mobster, Larry Sokolov, speaks: “Gentlemen, I want to thank you for your vote of confidence. As the new director of the casino operations I want to make a personal guarantee to each and every one of you that your investment in the Golden Shangri-La will be well looked after. The future looks very bright, gentleman. Very, very bright.”


Crime has paid off, apparently, for everyone.