the sum total of our choices
by Douglas Messerli


Arguably Allen’s most complex and rich film to date, Crimes and Misdemeanors is a existentialist study in moral ethics. Using a symbolic motif of eyes and different ways of seeing, Allen positions his numerous characters on two opposing sides, those who live within a moral system, either religious or social, and those that dismiss and/or violate moral values, believing if you can get away with it, any act is as good as another.

Family man and ophthalmologist, Judah Rosenthal (Martin Landau), has lived basically a good life, allowing his wife, Miriam (Claire Bloom) and his children a well-off existence and, if we are to believe the speakers at a banquet celebrating him, providing the community major philanthropic efforts, helping even to create a new hospital. Yet, like all men, he has made mistakes, been involved in financial indiscretions (although all has been paid back with interest) and has secretly had an affair with a airline stewardess, Dolores Paley (Anjelica Huston). As the movie opens, Dolores, fearful of losing Judah and angry because he has not divorced threatens retribution. Dolores has already sent Miriam a letter—which Judah has intercepted and destroyed—and warns him that she will tell his wife the truth about their relationship. Although Judah pleads with her and tries to reason, Dolores, at wit’s end, is emphatic about going through with the revelation, something which terrifies Judah, sure that his wife would be unable to accept it and that his carefully lived existence will whirl out of control.


One of his patients, Ben (Sam Waterston), a rabbi—a man quickly going blind—advises Judah to tell his wife the truth, suggesting that often such events even strengthen relationships. Speaking of his brother Jack (Jerry Orbach), a shady mafia-like figure, he tells Ben:


Jack lives in the real world. You live in the kingdom of God.
I’d managed to keep free of that real world but suddenly it’s
found me out.


At another moment during Ben’s advisement, he responds:


In short, Judah, up until now, a blessed man, is suddenly, like Job, faced with despair.


So determined is Dolores to reveal both their relationship and his financial acts that Judah feels he has no choice but to turn to his brother, Jack, who arranges a “hit”—the murder of Dolores, an act that Judah witnesses, after the fact, when he goes to Dolores' apartment to retrieve letters and her diary.


At the other end of the spectrum is the loser, Clifford Stern (Woody Allen), whose own relationship with his wife, Wendy (Joanna Gleason), is falling apart, and whose career as a documentary filmmaker is going nowhere. For years he has been working on a documentary of a little known American philosopher, Louis Levy (psychologist Martin S. Bergmann). As fascinating as the clips we see from that film—counterpointing the very issues of morality played out in Judah’s and other characters’ lives—it is also clear that Clifford’s “talking head” piece will never get finished and that no one will want to produce it. 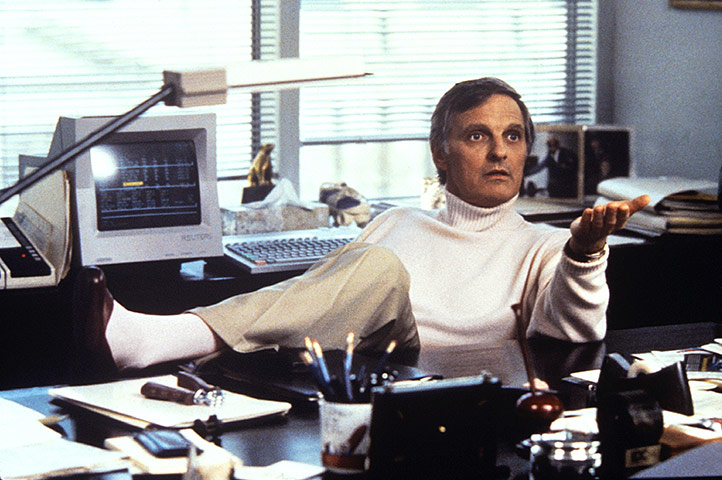 Wendy’s brother, Lester (Alan Alda) is a highly successful television producer—focusing, evidently, mostly on comedies (“If it bends, it’s funny. If it breaks it’s not funny,” he keeps repeating) who in self-congratulation is seeking to have a documentary made about his own life, and out of deference to his sister, asks his brother-in-law, Clifford, to direct it. A serious-minded filmgoer, Clifford cannot abide Lester, but agrees to take on the project just so that he can raise enough money to support his other work.


Here, once again, it appears, another character is ready to sacrifice his moral principles, giving into a corrupt figure. But, as usual, Allen’s cinematic self is too much a loser even to be corrupted, shooting reel after reel of Lester’s bull-shit philosophy and interweaving it with scenes of Mussolini’s comic-like posturing speeches, even catching the glib Lester (perhaps Alda’s most perfect role) shouting at his staff and trying to seduce a young actress. When Lester becomes furious after seeing the rushes, Clifford quips, “What is this guy so upset about? You’d think nobody was ever compared to Mussolini before.”


Meanwhle, Clifford’s life has become even complex, having fallen in love with Lester’s associate producer, Halley Reed (Mia Farrow), who shares the filmmaker’s admiration for Levey. But by film’s end Lester has invited her to London and, upon their return to New York, announces their engagement. The great philosopher Clifford so admired has suddenly committed suicide leaving a note:


In his quiet (and this film is quiet) way, Allen’s movie has, accordingly, asked some major questions: “Is there no justice?” “Do the wicked and “sub-mental” (as Clifford describes Lester)
receive no punishment?” or, the put it another way, “Is there no God?”

It appears that only the saintly, now blind, Ben—who is also Clifford's brother-in-law—can truly see the truth, that “without law, it’s all darkness.” It is perhaps fitting that the last poignant scene of this thoughtful film takes place at the wedding of Ben’s daughter. In the warm, golden wash of cinematographer, Sven Nykvist’s lighting, Judah, escaping the after wedding dinner for a few moments, encounters Clifford in the lobby, and sits down beside him. Describing the events of his life within a hypothetical discussion, he again brings up Allen’s moral conundrums.  Judah, it appears, having gotten away with his dreadful crime—a drifter has been accused of Dolores’ murder—has almost overcome his moral dilemma, arguing that, over time, any moral crisis will pass. Cliff, clinging as always to his dark view of his fate (Allen is, after all, the eternal Job), insists that one is fated always to bear one’s burdens for all “crimes and misdemeanors,” a dark revelation if one perceives this statement within the context of Allen’s own not-so-perfect life. A quote from Professor Levy perhaps summarizes Clifford’s position best:


We are all faced throughout our lives with agonizing decisions.
Moral choices. Some are on a grand scale. Most of these are
on lesser points. But! We define ourselves by the choices we
have made. We are in fact the sum total of our choices.

Judah may have found some sense of peace, but at what cost? Certainly he is no longer, particularly in his own eyes, a good man, which, of course, is why he is sharing his tale again, and surely will continually to retell until the day he dies. It is a kind of confession that can find no absolution whatsoever.