the deep purse
by Douglas Messerli


The marvel of many of Jacques Rivette’s films is not only that they are, in part, actor generated—he often works in collaboration with his actors for his texts—but that they are willing to take strange, sometimes disjunctive directions that engage their audiences in a voyage on which few other films or even fictions are willing to embark. Combining fantasy with a kind of political thriller, a murder mystery with an imaginary children’s game seemingly based on the arrondissments of Paris, a travelogue with a love tale, Le Pont du Nord crams into its 129 minutes overlaying and even contradictory cinematic genres reminding one, somewhat, of Jean-Luc Godard’s Pierre le Fou of 1965.


Yet in Rivette’s witty telling, it might be hard to identify the “fool.” Although it is Marie (the beautiful Bulle Ogier), a vaguely politically involved criminal recently released from jail, who is killed at the end of the film, she is less foolish and more in control of her destiny it appears that the young punk-karate-swinging, moped-riding girl who literally runs into Marie and refuses to let her go, Baptiste (Pascale Ogier). Although Baptiste appears to be strong and determined to protect her new acquaintance, she is ensnared in a large cocoon, haunted by paranoid visions of spies and terrified by surveillance of figures all named Max, and clueless of where to go and what to do in the women’s four day voyage throughout the city. Although at moments it appears that her relationship with Marie is a kind of lesbian attraction, it is more likely that she (as the real-life daughter of Bulle), is the dependent in need of a kind of mother. Although neither woman has a place in which to live, let alone sleep, Marie has money to buy food and other things and a bag which seems to contain everything from different costumes, make-up, food stuffs, and any many other necessities. Baptiste has only her karate and paranoid suspicions of being watched, which forces her to take a knife to the eyes of even advertising posters. 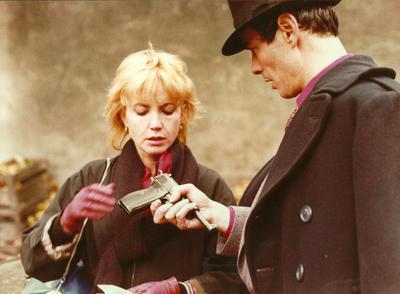 Together the women sleep on the streets or in late-night theaters, Marie claiming to be claustrophobic—perhaps understandable given her recent lock-up and necessary in order to explain why most of this film takes place outdoors, since shooting was less expensive than if Rivette had been made to use inner spaces and sets. Despite hooking up with the demanding love of Baptiste, Marie is seeking out a former lover, Julien (Pierre Clémenti), who shows up from time to time unexpectedly, taking Marie into his arms. But those arms seem no more protecting that Baptiste’s; Julien is attempting to quickly close a mysterious “deal” which, he assures Marie, will allow them to move away in order to lead a new life. Either out of jealousy or simple curiosity Baptiste steals Julien’s briefcase, replacing it with another, and thus bollixing up his clandestine deal. What the women discover within the briefcase is an odd assortment of Xeroxed newspaper clippings, various and unrelated lines marked in red—including a piece that mentions Marie. They return these to Julien on another of his sudden visits. They keep another strange document, seemingly a map of Paris but, according to Marie, is a little-known game she played as a child where in an apparently cabalistic pattern one arrives at various dangerous points in time and space: the inn, the tower, the bridge, etc, some resulting in imprisonment or death, others in the possibility of beginning the voyage again.


So the two begin on an odd tour of Paris arrondissments, at each point entering spaces that seem to show the city being torn away, large cranes and other mechanical machines destroying the old presumably to build anew. Both Marie and Baptiste discover at these various desolate spots a manifestation of a Max, generally Jean-François Stévenin, warns them away or sends them in another direction, the women moving through this mysterious but perhaps “patterned” series of spaces as if they might hope to discover a logic behind them. At one point, Julien shows up to tell her she is on a “hit” list, offering Marie a protective gun. 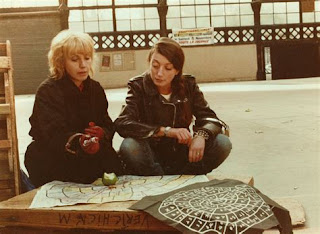 Finally at the bridge of the film’s title, Baptiste discovers a gigantic dragon, a marvelous construction that appears to be mix of a fire-spouting oil-derrick and a modernistic children’s ride, which Baptiste slays. Marie calls Julien, promising him the return of the map, while Baptiste, having stolen Marie’s gun, murders a man who had prevented her friend from entering the telephone booth. Finally confronting her strange shadow, Marie declares that her friend is insane and marches forward to wait for Julien, who, when he encounters, shoots and kills her, proclaiming “I loved you.”


But even here, Rivette refuses to close down his narrative, as his camera focuses on the angry Baptiste attempting to face off with Max in her karate stances. Max, it turns out is a Black Belt karate master, and, it soon becomes apparent, could easily destroy the mad Baptiste. But, in seeming collaboration with this odd figure, he begins to affirm and teach her movements instead. Has Baptiste been a collaborator herself, a figure that has helped all the others to finally make their “hit” on Marie, assuring them that she will not reveal their nefarious plans? Might Baptiste even be a kind of perverse feminist prophet baptizing Christ’s mother in blood? Was Julien possibly her double? 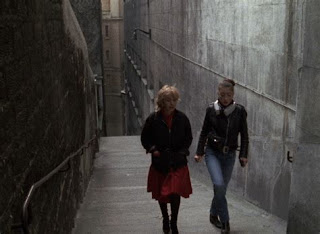 Of course, there is no answer. Rivette’s film is not a coherent narrative, ready to provide an easy summary to its often obscure events. Rather, the director takes us on an exhilarating ride where he, as he puts it, “upsets people.” “The film must be, if not an ordeal, at least an experience, something which makes the film transform the viewer, who has undergone something through the film, who is no longer the same after having seen the film.” Once one has entered a Rivette film, all other films seem slightly ploddingly predictable, the script or story determining events. In Le Pont du Nord we not only do not know why things happen, but how they happened, or even if they happened. One might imagine, that like the magical game behind the character’s movements, that seeing this film again might allow us to create a very different perception of what we are witnessing—that Marie might just as easily dig deep into her purse and pull out another plot!