over the line
by Douglas Messerli


Watching Michael Gordon’s Pillow Talk again the other afternoon, I recovered an old memory from youth. My mother and father seldom attended films; I can remember only about 10 times in their entire life when they did, three or four of those times with the whole family in tow. But in 1959, I remember one morning after which they had gone to see Pillow Talk—while I cared for my brother and sister—my mother recounting the entire story with great joy, giggling—something this not so happy homemaker seldom did—as she relayed the details of the plot. My mother loved both comedies and romantic dramas, the latter of which my father disdained. At the ripe age of 12, I was even more dismissive that he: I, who had become enamored with the plays of Genet, Ionesco, Pinter, Beckett and Albee, would never have attended such “fluff,” and could never have imagined that someday I might even choose to discuss the film.


Now that I have watched this film numerous times, I realize that my mother, as much as she had enjoyed the movie, had not perceived any of the film’s darker aspects. Indeed, when I first saw Pillow Talk, years later, and the two Rock Hudson and Doris Day films that followed it, I was a bit shocked. Not only did Pillow Talk reconfirm what I had long suspected—and which, being the “good boy” I was, kept me from having intercourse with the opposite sex straight through my college days—that the male was expected to forcibly rape a desired woman, was even encouraged by policeman to haul their bodies off to their apartments through the New York streets, but that women—at least the smart, good-looking, working women who Day represented—had to be lured through plots of great deception into the arms of men in order to accomplish the sexual “act.” No wonder I had been a virgin all those years! Sex was so inexplicably complex. Who had time for anything else? With a guy, I soon discovered, all you needed to say was “let’s go to bed.”
Just as startlingly, I perceived, like several of the films of Carey Grant, the authors had embedded jokes and situations throughout their script that eluded to and played with the fact of Rock Hudson’s homosexuality, creating a kind of “other” film hidden below the surface of the first—the one that most Americans, like my mother, had so enjoyably read.


Accordingly, while seemingly a story of love or, at least, “attraction,” Pillow Talk, in my reading was a story of deception, indeed numerous layers of deception. Songwriter Brad Allen (Hudson) has a busy life seducing and deceiving various women, singing a ditty he has written to all of his “loves” by simply changing the name each time he sings it, a trick overheard by Jan Morrow (Day), with whom he shares a party line, as she attempts to make and receive calls. Frustrated by Allen’s telephonic trickery and angry with his holding the phone line hostage, she reports him to the telephone company, who send out an agent, who herself is seduced by Allen. (Jan: “Can you believe that? They sent a woman. That’s like sending a marshmallow to put out a bonfire.”) 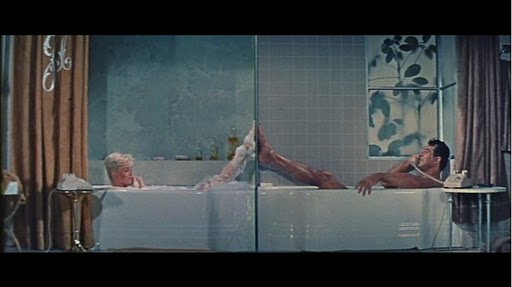 Working as an interior decorator, Jan is being wooed by one of her wealthy clients, Jonathan Forbes (Tony Randall), who, unbeknownst to her, is also the financial backer of Brad Allen’s musical shows on Broadway. At the party of another of her clients, Jan encounters a young soon-to-be Harvard grad, Tony Walters (Nick Adams) who insists upon driving Jan home from his mother’s Scarsdale mansion. They are only a few miles into the voyage before Tony is pawing Jan, and she, to sober him up and quiet him down, allows herself to be taken to a small supper club, where, by coincidence, Brad sits with one of the club’s performers, one of his girlfriends. Overhearing part of Tony and Jan’s conversation, and realizing suddenly that the attractive, dancing woman is also his formerly invisible telephone sparer, he begins the long series of seductions by playing a shy, gentlemanly Texan, Rex Stetson, lonely in New York.


Easily disposing of the drunken Tony (as he later does with Jan, Rex simply picks him up and carries him off), the two drive away in a taxi, beginning a series of dates where, using reverse logic, Brad makes utterly no advances, appeasing Jan’s good-girl defenses. Their phone sparring sessions continue, during which she admits she has found a lover, he querying his behavior, at one point even suggesting that Rex may be a homosexual—a man who “collects recipes and little bits of gossip—a screenwriting insinuation that employs the actor to openly question his own sexuality.


Still attempting to marry her, Jonathan also reveals his love for Jan to Brad, who uses what he learns to good effect, thus deceiving not only Jan, but his best friend.  At another point when visiting his friend’s office Brad/Rex spots Jan leaving, he ducks into a nearby doctor’s office, a doctor who just happens to be an obstetrician. When the nurse queries him if his visit is for his wife, Brad insists he himself has not been feeling “right,” a joke which implies that it he is who may be pregnant. Reporting the fact to the doctor arouses a kind of dizzy wonderment in both nurse and doctor that is played out not only once, but three times in the film (Doctor: “There may be a man who has crossed a new future.”). I guess we must presume that Hudson was what is called a “bottom,” a man who likes to get fucked.


Obviously—this is after all still 1959—Brad must get his comeuppance, as Jan discovers in a Connecticut hide-away to where he has lured her for the “kill,” that Rex Stetson and Brad Allen are one and the same, as, just in time, Jonathan arrives to save her. She cries all the way back to New York.

But Brad, this time around, has truly fallen in love and approaches Jan’s dipsomaniacal maid, Alma (Thelma Ritter) for a clue to how he may return to Jan’s good graces. She suggests that he hire her to decorate his own apartment. To keep the firm for she works from losing the money, Jan agrees, using all of her designer skills to create rooms that suggest a tawdry, carnival-like exaggeration of Brad’s sexual behavior.


As I suggested earlier, her revenge is reciprocated by his literal “rape” in that word’s original meaning of “carrying away a person by force,” as he takes her to his apartment, revealing that he has cut himself off from his old life, she employing his own traps (locked door, unfolding bed) to keep him from leaving as she falls into his arms with the happy ending of pillows and implied babies rolling behind the credits—assuring my mother, I am certain, that everything had turned out just swell, but leading me to believe that the writers’, characters’ and directors’ deceit had just begun, reifying as it had, everything they had previously satirized and mocked. It’s the kind of late 1950s entertainment, to my way of thinking, that not only crossed the line (both the telephone lines and the sexual line), but lied, while winking, even to itself.

Posted by greenintegerblog at 7:52 AM