the head of medusa
by Douglas Messerli

A.I. Bezzerides (screenplay, based on a fiction by Mickey Spillane), Robert Aldrich (director) Kiss Me Deadly / 1955


It’s interesting that between 1951 and 1956 the most paranoid movies of American culture were made, including Robert Wise’s The Day the Earth Stood Still, Don Siegel’s Invasion of the Body Snatchers, and Robert Aldrich’s Kiss Me Deadly. All three center upon individuals trying to uncover the truth about nefarious invaders or killers created by outside forces larger than their communities and who have the potential to destroy the human species as we know it. All have political implications in the fact that the larger forces of government and the military are ineffective; in each case it is one or two individuals which uncover the almost unbelievable “truths.”


All of these are also contain powerful metaphors for the devolution and destruction of our mankind. And, finally, all of these seemingly Grade B movies combine popular genres with serious subject matter, wedding pop-culture to significant film-making and creating some of the weirdest films of American cinema.


Perhaps the darkest of these three, although containing more comic elements than the other two, is Aldrich’s work, which grafts a true film noir to a sci-fiction ending, demonstrating, in some ways similar to Ridley Scott’s Blade Runner, that there is a natural symbiosis between the detective story and science fiction story-telling.

Although Scott’s hero, Rick Deckard may not be involved in a very appealing line of work, and, in fact, may not be a “hero” at all, but a man-created replicant, he is still meant to be appealing, a figure who—despite his failures—helps to save the world and is filled with the possibility of love. Although Mickey Spillane’s Mike Hammer was tough, he was also a kind credible hero in his refusal to forget the woman he picked up along the highway and who mailed him a message to “Remember Me, and whose death with which he was unintentionally involved. Bezzerides’ script, on the other hand, can hardly control its disdain of its central figure, Mike Hammer (ralph Meeker). The author himself wrote: “I wrote it fast because I had contempt for it… I tell you Spillane didn’t like what I did with his book. I ran into him a restaurant and, boy, he didn’t like me.” Can you blame Spillane when the very first woman Hammer meets, the runaway, sobbing Christina Bailey (Cloris Leachman) summarizes him, when she is finally able to speak again, in this manner:


Christina Bailey: You have only one real lasting love.
Mike Hammer: Now who could that be?
Christina Bailey: You. You’re one of those self-indulgent
males who thinks about nothing but his clothes, his
car, himself. Bet you do push-ups every morning just
to keep your belly hard.


The Washington, D.C. agents questioning him, after his survival in a crash that has killed Christina, go even further, describing his detective business as a decoy to swindle both his clients and their husbands or wives; pimping for his assistant, Velda (Maxine Cooper), Hammer evidently gets information on both spouses, double billing them for his covert information. Throughout the film, moreover, Hammer is shown as a brutal bully, repeatedly beating up those who stand in his way and even destroying a priceless record of one of the potential informants, Carmen Trivago (Fortunio Bonanova). 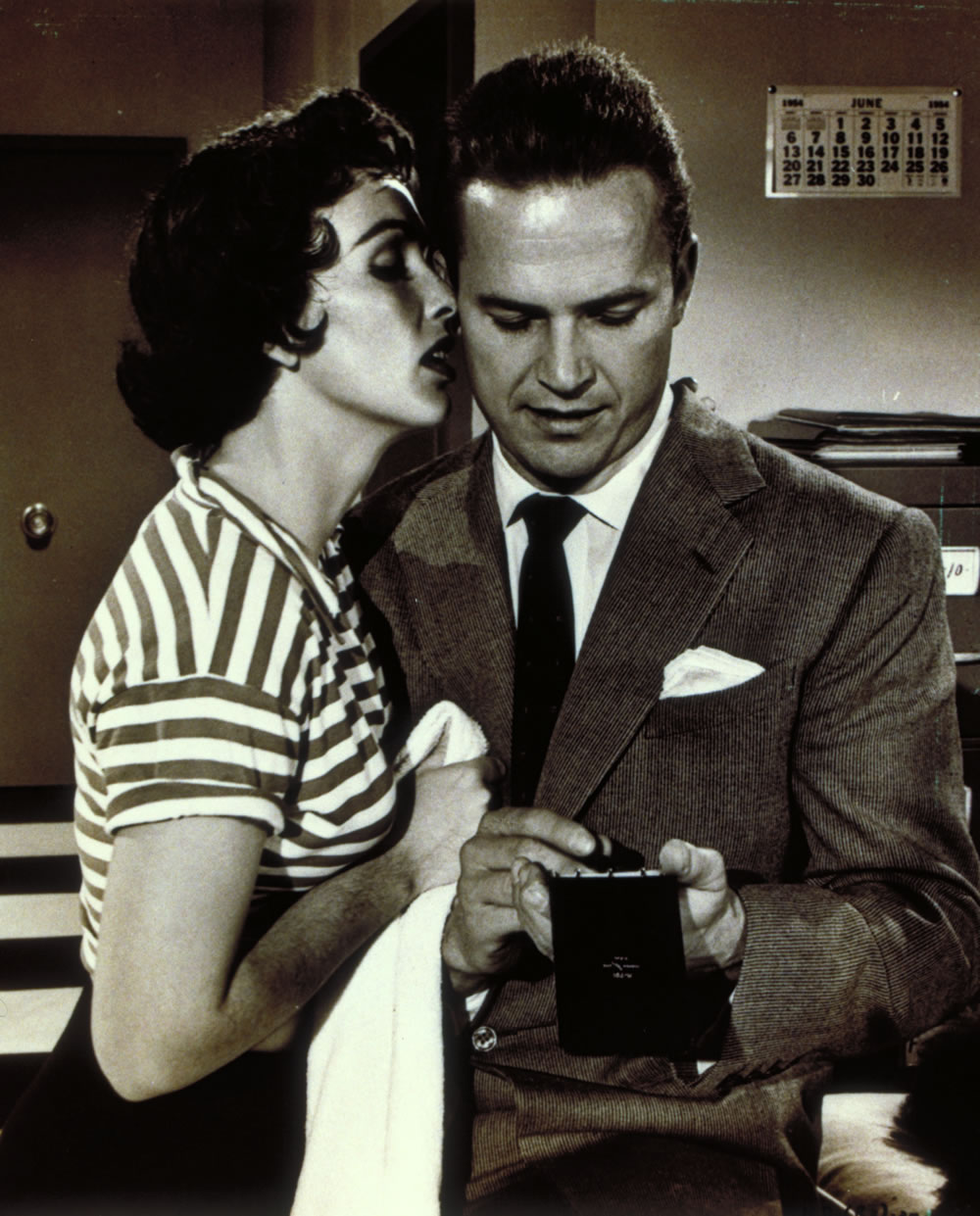 Yet Meeker somehow manages, in his Robert Mitchum-like underplaying of scenes and his dark humor, to make Hammer credible. And despite the bumbling stupidity of some of his investigation, at least he finds a thread which turns into a string—Velda suggesting it may become a rope—that the Federal force seem unable to uncover. And the dark, menacing figures which threaten him and everyone else whom he encounters are dangerous thugs, worthy of his thrashings. Indeed, the Los Angeles Aldrich shows us is an unfriendly as any world could be, even the landladies and clerks meeting him with contemptuous hostility. None of the individuals he interrogates will tell him anything in fear of being murdered—besides Christina, at least two others have died in “accidents,” and his own friend, perhaps the only openly joyful figure in the movie, the car mechanic Nick, is murdered for  visiting another garage in an attempt to help Hammer.


Although it is suggested that Hammer is a ladies’ man, he has little time for any of the woman he encounters, even lover Velda. She appears, at times, to be lying or at least hiding information. Friday (Marian Carr), the half-sister of the mafia-like Carl Evello (Paul Stewart), is a lusting temptress, who almost before introducing herself, kisses him: “You don’t taste like anyone I know.” Equally unappealing is Christina’s former roommate, Lily Carver (Gaby Rodgers), who also tries to come on with an absurdly melodramatic line: “Kiss me, Mike. I want you to kiss me. Kiss me. The liar’s kiss that says I love you, and means something else.” Lily, it turns out, is not even who she pretends to be, but the evil mastermind’s partner, her real name being Gabrielle. We can only wonder whether Velda, whose last name is Wakeman, will wake Hammer up from his stumbling stupor in time.


The only half-way appealing location in Hammer’s mostly nighttime voyages through the city is his own apartment at 1041 Wilshire Blvd. (Wilshire and Beverly Glen), but even here, as we see when he first reenters it after his hospitalization, he does not feel safe. Velda warns him against standing near the windows: “Somebody night…blow you a kiss.” And it is in his apartment where he discovers what fool he has been and from which he is later kidnapped when Lily-Gabrielle goes missing. 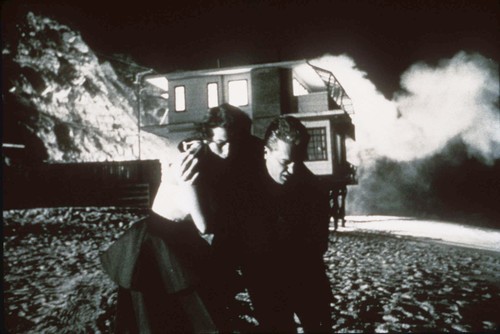 Through a series of coincidences and good gum-shoe logic, he finally discovers a key which leads him to what Velda calls “the great whatsit,” which contains, so we later discover, a hot and glowing substance, a kind a nuclear material that can destroy all those who come in contact.


He is himself burned from even attempting to peer into the box. When Velda is also kidnapped, he finally traces the valise, through a self-drugged art dealer to the evil doctor in cahoots with Gabrielle, Dr. G. E. Soberin (Albert Dekker). Curious to what is the mysterious valise, Gabrielle attempts to question the doctor, who explains that she would never believe it if he told her, using metaphors to describe the contents, comparing it with Pandora’s Box and the pillar of salt into which Lot’s wife was transformed,  before suggesting:

The head of Medusa. That’s what’s in the box, and who looks on
her will be changed not into stone but into brimstone and ashes.
But of course you wouldn’t believe me, you’d have to see for
yourself, wouldn’t you.


His prediction comes true, as she pulls out a gun and shoots him, prying open the valise filled with nuclear matter which, when it meets the art, creates an atomic-like explosion.

After the movie opened, the final scene of the film was cut; that scene showed Hammer and Velda escaping the house and rushing into the ocean, at least temporarily saved. Accordingly, most viewers saw a film which suggested the apocalypse, everyone who having touched the box, being destroyed. In later years, the original ending has been restored. But I truly wonder if really matters, since anyone that close to a nuclear explosion would have been so contaminated with radioactive matter that they would not have survived.  And what, given the results of such an explosion, might survival have signified, since Hammer, as he name implies—at least in Aldrich’s version—was already made of something like stone, his abdomen without any flab, his heart unable to reach out to anyone else. True, he has now saved Velda, but as they cling to one another at ocean’s edge, one doubts their relationship can survive all the dark visions they have witnessed around them. Kiss Me Deadly ends, accordingly, as one of the bleakest of all American films, presenting as it does a world in which even a kiss kills.