Winner of the Grand Prix at the 2012 Cannes Festival--Matteo Garrone’s first film since the dark, Neapolitan Mafia-centered Gomorrah--Reality, although satiric in intent, is perhaps even a darker film, philosophically speaking, than his 2008 work.


Cinema, by its very nature, has no choice but to question, at some level, the nature of reality, since even what the audience is watching a kind of delusion; from the interplay of light and dark to the film sets (no matter how realistically presented) to the actors’ performances, film is a purposeful delusion, which the audience—in a kind of suspension of belief—temporarily accepts—even if the film plays itself out in terms of exaggeration and fantasy, such as the works of someone like Federico Fellini, whose style, at times, Garrone’s new film embraces.


But Garrone has not only recognized that inherent issue in filmmaking, but embraced it as his title and subject. Although most critics to date have noted that the subject of Garrone’s film is “reality” television films, most specifically the popular—particularly in Italy—Grande Fratello (Big Brother) series, few have commented that throughout the whole of Garrone’s film, the larger focus is on concerns of what is or is not “real.”


The film begins, after a grand Fellini-like swing of the camera across the Neapolitan landscape, with a fairy-tale like wedding, played out in a kind of televised fantasy-land, to which the wedding couple are brought in a ridiculously anachronistic carriage decked out with 17th century-like Austrian rider and horses as if it dropped from the sky from a kitschily topped wedding cake. Inside the gates, the wedding hall and spacious grounds are filled with a Disney-like maze of reflecting pools, concrete bridges, and greenswards that imitate a worker’s vision of paradise. Indeed, the family and guests of the bridge and groom are Neapolitan workers, all outrageously dressed and most of them grossly overweight, including the immediately family of the thinner Luciano (Aniello Arena) and Maria (Loredana Simioli), whose chubby children, father, mother, aunts, and brother obviously love to eat. A group portrait presents a surreal vision of this brightly colored world that might be at home in later works by Fellini. 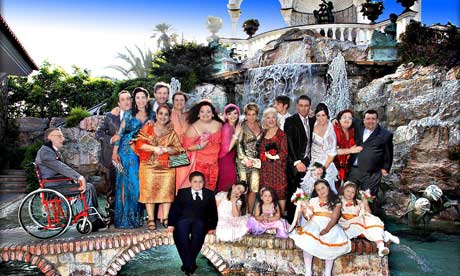 Into these mad festivities flies, literally, Enzo (Raffaele Ferrante), an almost deified figure for having been a recent performer on Grande Fratello. As the wedding participants applaud and attempt simply to touch their television hero, Luciano, whom we soon discover is very much at the center of family fun, dresses in drag, suddenly appearing in the midst of Enzo’s act as his former girlfriend. Although, he takes the intrusion with some grace, Enzo is clearly not amused by Luciano’s comic act—neither are most of Luciano’s family, who have seen him play such roles numerous times—and is even more irritated when, as he is about to leave, Luciano again accosts him, demanding to take a picture with his young daughter.


The party over, we now might suppose we can catch a glimpse of the celebrants “real” life, but that world--a large, decaying stone apartment building which looks more like a series of  urban caves than a city structure--is just as dramatically absurd, as Luciano carries his crippled father up the stairs piggyback, the mother, aunts, and brother heaving their bodies, in constant complaint, up the stairs behind. This family, obviously, live in a world as exaggerated as a mix between the US reality shows, Here Comes Honey Boo and Jersey Shore.

The next morning we at least see a glimpse of what we might describe as verisimiltude, watching Luciano at work as a fishmonger in the nearby square. But even that glimmer of normality is quickly dashed as his wife shows up at another local apartment building to collect all the Robots (a ridiculous Italian kitchen-aid—which evidently dices, slices, stirs, blends, and even kneads bread—which has been delivered to them by contract, and which for a few Euros Maria and Luciano buy up, selling them for greater sums to underworld figures. Exactly how the scam works is never made clear, but apparently Maria also works for the Robot company. The refusal of one elderly woman to give up her new utensil sends Luciano and his friend Michele (Nando Paone) to a church service and finally into the home of the recalcitrant receiver, where they discover the now filthy machine in use.


Later, at a local shopping mall, Maria and her roly-poly offspring encounter a large try-out session for Grande Fratello, and immediately call their beloved Luciano, urging him to join them. Because of the Robot incident, he arrives late, but still wheedles a try out, which further leads to a finalist stint in Rome.  At first, Luciano seems disinterested in the whole affair, simply stating his daughter insisted that he give it a chance. But after the Rome interview, where he reveals he has “really opened up,” telling them things he’d never even told his father, he begins to long for the chance to “make it”; certainly, as we easily perceive, he is a more interesting figure than Enzo. Indeed, within a short period, Luciano convinces himself he will be chosen for the show, and the local community, delighted by the possibility of one of their own becoming famous, encourages him.


His own extended family is at first supportive, but gradually break into camps, some egging him on, others doubting the wisdom of going off for several weeks to leave his wife, children, and job behind. Soon, however, Luciano is bitten with what is later described as “Big Brother” fever, and proposes to sell his fish shop, using the money to improve their house and support them in his absence, which he becomes increasingly certain will soon be announced.


Simultaneously, Garrone’s film moves into new dimensions as, little by little, Luciano becomes convinced that the Rome studio has sent out secret emissaries to check up on him. First, a beautiful woman from Rome and her friend visit his fish shop, questioning him about various differences between his fish stand and those in the capitol city, such as leaving clams to soak in water. Charmed by them and a little suspicious, Luciano, gives them a substantial discount.


When he later chases away an beggar, he grows suspicious when he sees the poor man speaking with a besuited gentleman around the corner. Has his niggardly behavior hurt his chances for appearing on the show? Before long, Luciano is uncovering spies almost everywhere he goes. As he and Maria attempt to collect a new Robot, Luciano observes a suspicious man watching them, and suspends his acts, giving away the Robot instead of collecting it.


When he reecounters the beggar, he treats him to a drink, pizza and pastries. As the Big Brother series begins its new season—with two new members to be announced a week later—Luciano goes even further to prove his good intentions and reveal his worth. With Maria out of the house, he begins to give away their furniture and even their clothing to the poor. Maria, having already turned against her husband’s aspirations, is furious and leaves him.

For all that, we realize, for the first time in his life, Luciano has changed his previously selfish and criminal ways. Having sold his fish stand, given away much of his household, and abandoned his petty thievery, hasn’t he become a new and better man? Which is the “real” Luciano? Which Luciano might we prefer as a "hero"—the desire after all of all the “Big Brother” wannabes? Mightn’t his delusions be preferable to his previous values?


Before long, however, Luciano, alone in the room with his television running, begins even to suspect a cricket on the wall as a spy from the television show. Deep now in madness, he no longer has any sense of what might be described as “reality.” Even after he has clearly been eliminated from the competition, he is convinced that the contestants are imitating his routines, how he moves and dances.


Visiting Luciano’s family, Maria is convinced to return to him, if only to help rouse him out of his growing insanity. Michele, represented throughout as a truly religious man, tries to involve Luciano in church work, ecouraging him to serve the poor by working on the Church’s food line. Together they even plan a pilgrimage to the Vatican.

As Garrone takes us into St. Peter’s Square with the two men among a crowd of thousands, we almost wonder whether “reality” might not be found within the religion in which the culture is so immersed—that is, until suddenly Luciano disappears.


We witness him, once more, at the Cinecittà Studios, at the very spot where Fellini once filmed. The major set of that studio is now the large Grande Fratello compound into which Luciano has miraculously made his way. Opening a brightly red colored door, Luciano enters the magical world he has so longed to be part of, at first, like the audience of the show, watching the participants’ banal actions—half-naked sybaritic acts mechanically and almost desperately performed—through a glass wall. At moments it almost appears that they are imitating Luciano’s clumsy attempts throughout his life to entertain his family and friends. Suddenly, through an open space, Luciano enters into the “real” space of this “reality” show, sliding unseen along the walls, at first giggling with boyish joy and wonderment and then laughing aloud as he seats himself upon a neon-lit chaise-lounge, the camera moving up and off—the title finally appearing at the film’s end.


We have no way of knowing whether Luciano has finally come to see the absurdity of this totally manufactured reality or whether he is simply pleased to have found himself within it, having completely crossed the line between sanity and madness and entered into a new "reality."


Perhaps, Garrone is telling us, there is no way, in our totally artificed world, to determine the difference. Truth is only a matter of perspective. Just before the film was about to begin at the AFI Festival in Hollywood where I saw this feature, the film’s introducer explained that the work’s major actor, Aniello Arena, had been temporarily released from prison, where he is serving a term for murder, to perform in Garrone’s movie each day before returning prison at nights. The AFI could not get permission, however, for another release for his appearance at this showing.


Is Luciano, in real life, accordingly, an actor or a criminal? Maybe his being one he is necessarily the other. Truth, as Oscar Wilde would have argued, has little meaning for art.