trading up
by Douglas Messerli


Stanley Donen’s comedic thriller, Charade, begins with a wealthy young woman, Regina Lambert (Audrey Hepburn) at a ski resort (Megève) admitting to her friend, Sylvie, that she is soon going to get a divorce from her husband Charles: there are too many things she does not know about her husband, too many secrets that he has seemingly kept from her. A few moments later a handsome stranger, Peter Joshua (Cary Grant), complains to her about her friend, Sylvie’s water-gun shooting son. The stranger is rebuffed with a clever put-down:


Reggie: I already know an awful lot of people and until one
of them dies I couldn’t possibility meet anyone else.
Peter: Well, if anyone goes on the critical list, let me know.


When he turns to go, she chides him, “You give up awfully easily.”


The scene sets up the movie in a nutshell: love, divorce, guns—or violence, at least—will be our focus for the next 100 and some minutes, along with, of course, some tuneful songs by Henry Mancini.


Upon her return to Paris, Reggie discovers her entire apartment has been cleaned out, her maid is missing, and, before long, receives news of her husband’s death, a man murdered and tossed from a train. She can now “meet” that new someone, and on cue Peter Joshua again shows up—a clumsy and basically unexplained plot element that nonetheless seems to make sense, for we already know that they destined to fall in love.

Charade’s ludicrously labyrinthine plot suddenly takes over as we are introduced, one by one—at Charles’ funeral, no less—to the major characters, Tex Panthollow (James Coburn), Herman Scobie (George Kennedy), and Leopold Gideon (Ned Glass), a group of ex-soldiers who, along with Charles and another figure, Carson Dyle, robbed an OSS shipment of $250,000 in gold that was to have been delivered to the French Resistance, and the US government—so Reggie is told by embassy officer, Hamilton Bartholomew—wants it back. He and, evidently, the three remaining robbers, are convinced that, since Charles held the money, she must know of its whereabouts.


Once this ridiculous plot contrivance is set up, the movie settles back into a romantic comedy as Reggie and Joshua rush about Paris, threatened and harassed, from time to time, by the evil “gang.”


Grant, so the story goes, was hesitant about being involved in a film where he (at the 59 years of age) was chasing Hepburn (34), so the writers simply cut all of his lines that suggested his sexual interest in her, and gave them to the character Reggie, the result of which is that Grant plays his character with the most laid back diffidence of his film career. He seems more bemused by Reggie than sexually interested.

As the threats and acts of violence (a burning-match attack in a telephone booth, the kidnapping of Sylvie’s son, a battle between Joshua and Scobie on the roof of the hotel) begin to pile up, it also becomes evident that Joshua is not whom he seems, finally admitting that he is Carson Dyle’s brother, Alexander. At first horrified at his lies (it is lying after all that separated her and her husband), Reggie quickly recovers her equilibrium and, even more incredulously, her trust in Grant’s character, the authors repeating the same conversation that she had with Peter Joshua, as a standing joke:

Off they go for more adventures, these ending in several deaths, as the robbers begin to suspect each another. Once more, Reggie and, now Alexander, go through the contents of a small bag Charles Lambert had left behind: toothpaste, a small calendar, a letter, a ticket to Venezuela, and passports in multiple names etc., nothing that seems of value.


But now, following the instructions of the embassy official Bartholomew, Reggie finds herself in even more terrorized situation, particularly when he insists that Dyle’s brother died years ago, and soon after the camera pulls back to find the Grant figure in the room with the remaining “gang” members.


The former Peter Joshua, Alexander Dyle now admits he is simply a professional thief, Adam Canfield. The series of questions is repeated once again, her trust in the man amazingly intact.

As the body count raises, both Reggie and now Adam, follow a clue in her husband’s calendar where they encounter several booths selling stamps to collectors. In a simultaneous instant both she—who has given the letters on the envelope to Sylvie’s young son—and he realize the truth: the money has been used to purchase several rare stamps, which the boy, Jean-Louis, has exchanged with a stamp dealer for a large package of international stamps. When they track down the dealer, he admits the rarity of the stamps, returning them to Reggie.


But now that they have the “money,” Reggie is in even more danger as Bartholomew, the embassy man, lures her to a square outside the Paris Opera, with Joshua/Dyle/Canfield chasing after. Bartholomew, we discover, is really Carson Dyle, one of the original soldiers who have stolen the gold, and is now about to kill Reggie. Hiding in the prompter’s box Reggie is stalked by Dyle as Canfield, high above, tracks his steps across the stage, finally springing open a stage trap door which sends Dyle to his death. I told you the plot was ludicrous and labyrinthine, now operatic. 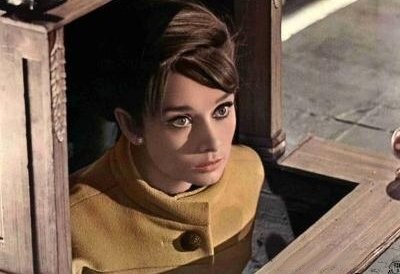 No matter, Reggie is safe, has the money in hand, and has fallen in love with Canfield. Crime seems to have paid off, even if the stamps, now glued to the envelope, may not have the same net value. Oddly, despite being a professional thief, Canfield, encourages her turn over the stamps to the US embassy.


As Reggie enters the office of the US agent, Brian Cruikshank, the government official in charge of recovering stolen property, she is suddenly greeted by, you guessed it, Canfield, who now admits his real name:


Reggie: Is there a Mrs. Cruikshank?
Cruikshank: Yes.
Reggie: But you’re divorced.
Cruikshank: No.
[Regina’s face drops]
Cruikshank: [getting out his wallet to show her a picture]
My mother, she lives in Detroit, you’d like her, she’d
like you too.
Reggie: Oh, I love you, Adam, Alex, Peter, Brian, what-
ever your name is, I love you! I hope we have a lot of boys
and we can name them all after you!


It appears, she has traded in the stamps—which presumably had formerly been the contents of her house—for a new husband. And so many people have died or simply been extinguished in this story, that she will now clearly have room to meet many another in her life.