Steven Spielberg’s film Lincoln is so much more ambitious and intelligent than any other American movie of the year that one would have to a cynic to deny its worth. True, there are numerous sentimental moments, particularly between Lincoln (the brilliant Daniel Day-Lewis)  and his beloved son, Tad (Gulliver McGrath), and there are numerous scenes of clumsy exposition, such as three 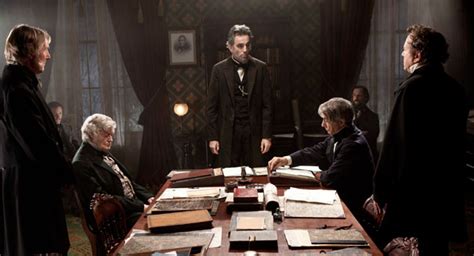 Black soldiers' recitation of Lincoln’s Gettysburg Address to his face and Lincoln and his wife’s (Sally Field) reiteration of their son’s death and her near insanity—however necessary these are to provide us with information we need to evaluate the president and his situation. Tony Kushner, our best epic and political playwright, however, has done a remarkable job in creating a literate and basically focused script that, in turn, has encouraged the director to tamp down his often unbridled sentiments—which have tended to turn most of his works into behemoth pop cultural icons—and fully reveal his considerable filmmaking talents.


Spielberg’s and Kushner’s determination, moreover, to concentrate their story upon the final four months of Lincoln’s life as he attempted to end the Civil War and pass the Emancipation Act, freeing the slaves, transforms the film from a lumbering biopic into a stunning reenactment of American politics. That the political scene of the day was even more entrenched and far more contentious and bawdier than it now is, makes this film, accordingly, a timely statement that clearly demonstrates, as Doris Kearns Goodwin had in her book, Team of Rivals, just how brilliant a political force Lincoln was. Unlike most depictions of Lincoln, finally, this film—while reasserting the man’s monumentality—does not portray the president as a saint; Day-Lewis’ Lincoln is a flawed man, a gawky giant of a being, who could be contentious, insistent, and, particularly, moody, caught up as he was in the bloody slaughter of so many of his countrymen. If he was a wit, so too was his humor often so homespun that it bordered on the corny. His numerous maxims at times seem vague and pointless. Even he described himself, at moments, as a preacher who was too lazy to stop his sermon. In short, this Lincoln is very much a human being, a man, although determined to bring equality into law who was not always sure he was comfortable with the Black culture for which he was battling. As he tells the ex-slave, Elizabeth Keckley, a White House dressmaker and confidant of Mary, after she questions him whether he will accept her and her people as equals, “I don’t know you”—although tempering it with a phrase from King Lear, suggesting that since Blacks appear to be, like himself, “bare, forked animals,” presumably he will used to them. Spielberg’s and Kushner’s Lincoln is a man not above selling, through the film’s three comic figures, with William N. Bilbo (James Spader) at the center, political positions in return for votes.

Even the most morally outspoken center of the work, Thaddeus Stevens (Tommy Lee Jones), an absolute abolitionist, whom we discover near the end of the film, sleeps with his Black housekeeper, describes Lincoln as a “dawdler” and fears Lincoln will “turn his back on emancipation.” Lincoln and his Republican supporters must draw in Stevens' “compass point” morality (as Lincoln explains, the compass always points due north but it does not tell you what chasms, swamps and other natural phenomena lie between), demanding that he argue that the amendment does not assure Blacks equality in social and voting rights, but simply assures equality before the law. The painful scene in which Stevens backs away from his belief in universal equality brought tears to my eyes in observing how righteousness has necessarily given way to political expediency. Attacked by a fellow radical abolitionist for his changes in position, the nearly destroyed Stevens can only admit that his goal is simply to get the bill passed; when asked if there was anything he might not say for that purpose, his only answer is a grim admission: “Seems not.”


The dilemma at the heart of this remarkable drama is that, although he wants the bill passed, Lincoln is even more impassioned to end the war. When Confederacy leaders send a delegation to discuss peace, he—particularly given Republican founder Francis Preston Blair’s pressures—cannot simply dismiss talking with the rebels. If the war ends, however, there is little chance that emancipation will be passed, and Blacks will inevitably return to their roles as slaves. When the Democrats get wind of a possible truce, the House demands a postponement on the very day of the vote. Playing with partial truths, Lincoln assures the legislative body that no such delegates are in Washington. And we recognize in this half-truth just how far Lincoln has himself come in his determination to see emancipation happen. 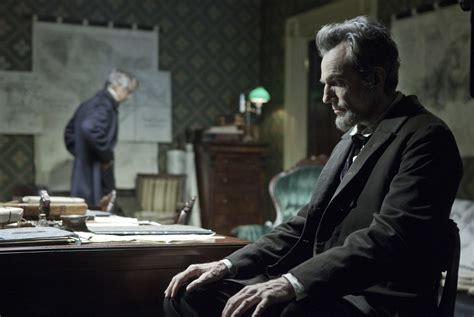 Part of the reason this movie is so excellent is its superlative actors who totally embody their roles. Daniel Day-Lewis, in particular, not only creates a utterly believable Abraham Lincoln, but seems to have almost transmogrified himself into the historical figure. In his long, deep silences particularly—moments in which it seems that Lincoln has gone into speculative hibernation—the actor is so convincing that we cannot even imagine the President himself enacting his life better. At a moment when Lincoln is almost ready to choose peace over freedom, to sacrifice his moral position to the desirable social and political expediencies, his casual conversation with his two Morse code operators changes everything. Are we fitted to our times or simply living our time out are the issues which underlie his questions. One man, responding that he is, by education, an engineer, triggers a memory in Lincoln of when he first read Euclid’s axiom: “Things which are equal to the same thing are also equal to one another.” The implications of that statement, in the context, are suddenly immense. If people, Black and white, are both “Bare, forked animals,” as he has told Elizabeth Keckley, then they are axiomatically “equal to one another.” The pondering leader suddenly changes his message: the Southern delegates are to be delayed in their voyage. The 13th Amendment to the US Constitution passes the House of Representatives, moving on to become national law.
As we know from history, Wilmington and Richmond were vanquished, hundreds more soldiers died, but the War did finally come to a close. Lincoln’s tour of the South with his son Tad is, as he himself notes, indescribable: “I have seen nothing like it.” Lee surrenders to Grant. We all know what happened next, but this restrained film does not show it. Rather, the young Tad, attending an operatic production is forced to hear the news from a slightly hysterical theater manager, who announces at this second theater that the President has been shot. The boy clings to the edge of his balcony booth in horror, until finally an adult pulls him away. Although writer and director repeat yet another of Lincoln’s speeches, nothing else need be said.