Changing my usual pattern when speaking of the movie I have just seen, I am going to try to resist telling most details of the plot. Of course, in any James Bond movie plot is important in that the vicarious vicissitudes of the spy’s exciting adventures is at the heart of any episode. Given the complete diffidence of the early figures—particularly Sean Connery, but even Roger Moore and Pierce Brosnan—who portrayed Bond as a suavely sexual, testosterone-filled male, who, in the service of Her Majesty’s Kingdom—were basically invulnerable as they drank, gambled, and sexually enchanted every woman they met, be she friend or enemy—however, I don’t believe plot was ever essential in these Ian Fleming-based fables. The Bond image, established by Connery, was an impervious penis, who plotted, gunned-down, and wittily dismissed the numerous evil villains out to destroy him, with a penetrating glance, along with any other tools with which Q might have provided him. Despite all the manically devastating tortures that might face him, there was no fear that 007 would not come through, his thinly tuxedo-wrapped body intact, with yet another girl on his arm or, more explicitly, impaled under his hirsute chest. 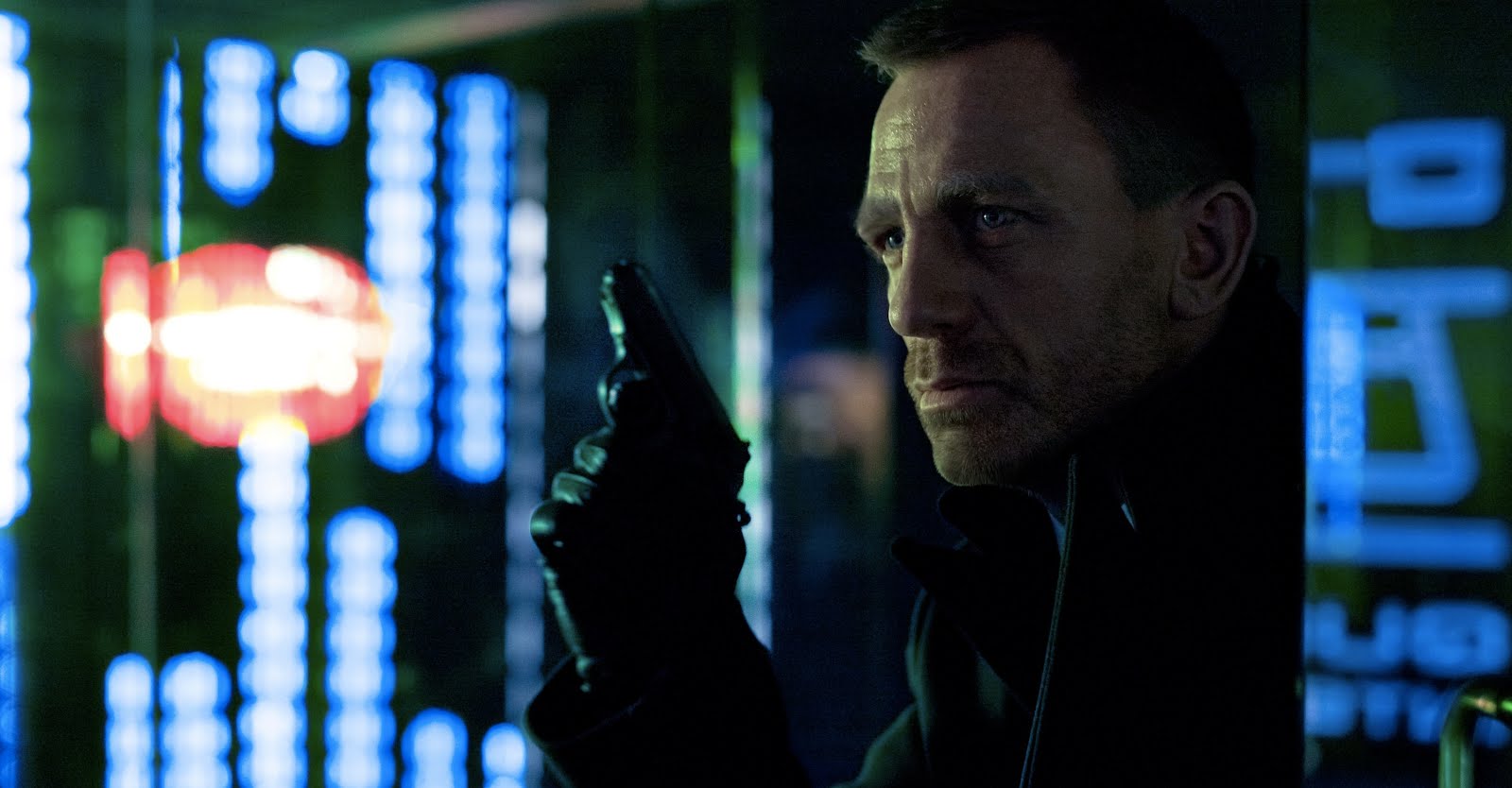 In the remake of Casino Royale and Quantum of Solace (a movie, I must admit, I never saw) Daniel Craig as Bond, changed everything. Both of these films made the Bond image over, without particularly emphasizing it, into a more vulnerable, certainly less heroic figure, without sacrificing the heroic events and womanizing of the original—at least superficially. Somehow, even in those first two films with Craig, it wasn’t just vulnerability that defined his character, but a willingness to explore terrains Connery could never have thought of. Craig, for the first time, made Bond feel less like a cartoon figure than a real human being, a troubled, sometimes confused, almost existentialist hero who, despite his smaller physique and, at times, even grizzly appearance, had all the pluck of the former Bonds without their absolute athletic abilities. Craig as James Bond was a kind of remarkable everyman, and even without all that beautiful body hair and rippling abs and the polished Scottish accent, was far sexier in his bodily clinging suits than the patriarchal debonair Connery or pretty boys Moore and Brosnan (although Brosnan has since revealed himself as a far more capable chameleon who might almost have been able to make the same transition that Craig has achieved).


While the previous two films merely hinted at the radical shifts of the Bond figure, Mendes’ Skyfall takes the whole Bond transformation on as its very subject, analyzing it from the shift from the cold war spy tactics to the inevitable alteration of world politics, where the evil forces are no longer moles, with their molls and evil overseers from opposing countries and political forces, but are now figures of shadowy world, where the villains are never who you might expect them to be—and, accordingly, far more dangerous and unpredictable.


Raul Silva (Tiago Rodriguez) (played by the powerful actor Javier Barden) is just such a figure, a former member of the British Secret Service, one of M’s favorite operatives, who has gone rogue when she abandoned him to the Chinese, who painfully tortured him. Even then, as we learn, he refused to give up information, ultimately using the cyanide pill embedded in his tooth to relieve his suffering—and release him from his discovery that M (the always admirable Judi Dench) has betrayed him. Unlike all the villains of past Bond adventures, Silva’s goal is not world domination, money, gold, or any worldly possessions—just simple vengeance, and, accordingly, he is the most dangerous villain of any Bond adventure to date. Just as in the Coen brothers’ No Country for Old Men, Bardem takes evil to new levels; he is unstoppable, determined to track down his enemies and all their associates with a ploddingly mad insistency.


Early on in this somewhat long fable, Bond is revealed, as is M, to be outdated—both mentally and physically—figures who have outlived their value to the system which they have served. M refuses to abandon her position even though under her watch, and through Bond’s effectiveness, they have allowed files listing the major spies embedded in international terrorist organizations to be stolen and utterly compromised. Indeed, their encrypted computer systems have been high-jacked, we soon learn by an international terrorist (Silva), one of their own. Early in the film Bond is shot and is presumed dead, the results of which have great significance of his possible continuance. When he, “resurrected,” as he puts, it returns, he fails all his tests; but M, mysteriously if predictably, protects him, allowing him to remain in his position despite her—and everyone else’s—serious doubts. In short, Craig as Bond is as different from Connery (Moore or Brosnan) as you can get. He can’t even shoot, let alone lure any woman to him with great success. His brief affair with Sévérine (Béréice Marlohe), a woman saved from the Macau sex trade by Silva, ends in her death—perhaps not that different from the endings of several previous “Bond women,” but sadder this time, simply because Bond is totally unable to save her from Silva’s determined murder through a perverse enactment of the William Tell myth, with, instead of an apple upon her head, a glass of Bond’s favorite whiskey as the target. Craig’s Bond, as might be expected, misses the target, shooting high, while the villain purposely does in the beauty.

In short, instead of reiterating the Bond franchise, this special 50-year version, the 23rd or 25th Bond film (depending upon whether one includes the early spoof, Casino Royale and the unofficial Never Say Never) utterly redefines the central and subluminary characters as both the story and figures of contemporary British politics openly debate their relevance and necessity within the culture at large. It’s a brilliant device that allows the Bond franchise both to link the new world, represented by Craig, to its past and to disassociate itself from Connery and other impersonators of that role. This movie wants it both ways—and gets it.


On the one hand, Skyfall pulls out the stops to connect the Craig version with the Connery one—if only the audience might imagine a taller, more hirsute, more dapper figure having fallen through age into a slightly smaller, less handsome, but determinedly energetic other self. Connery’s links with Scotland, particularly in this film through the last dark scene in Bond’s childhood home, Skyfall, are retained. His long-term connection with M (as Judi Dench) has been brought forward from previous movies. Throughout the film, Mendes goes out of his way to reference several of the previous Bond films, subtly employing the memorable Bond themes, this time in low orchestral rumblings, spectacularly referencing Bond’s always international travels (some of the best scenes of this film were shot in the neon-lit Shanghai cityscape and in a recreated Macau backdrop), and, for the sixth Bond film, bringing back Connery’s silver-birch Aston Martin D85 car.  Even Miss Moneypenny, this time a beautiful and sexy Black woman, Eve (Naomie Harris) who has previously worked with Bond “in the field,” instead of the white, slightly old-maidenish woman of the early Bond movies. There’s just enough there, if you are willing to suspend your belief, to trace that earlier Sean Connery Bond to this broken down and likeable Daniel Craig version. Upon viewing this film on Christmas day, my companion Howard asked, bemusedly, are we supposed to believe that Eve Moneypenny is Miss Moneypenny’s daughter? If so, I answered, Miss Moneypenny must have been much more exciting that she appeared on screen, to secretly have sex, apparently, with a Black man!


The film fortunately does not truly dwell on this aspect of its continuity of Bond-related events, instead creating what might be described as almost an alternative universe for the famous spy hero, establishing Daniel Craig as a very different—if simultaneously related and similar mythical hero.


As I’ve already suggested, the Craig version of Bond is not at all diffident, removed, invulnerable, but is a totally human being about to be abolished, along with his boss. By film’s end, in case you haven’t seen this movie, M. is killed. The world she represents is destroyed, while Craig’s Bond has clearly created a new world order. Sure, he remains a ladies’ man—just like Connery—as suggested in his shower scene with Sévérine. He wins big at the Macau tables. He drinks endlessly, especially in the early scenes after he has been presumed dead. But this Bond is a moral figure, attracted to Sévérine because of his recognition of her dilemma, disgusted by his own drinking, and slinking back in embarrassment and self-loathing into M’s home. This Bond is not at all impervious to destruction: he is shot several times, almost killed, presumed death. In one of the most powerful scenes of the film, tied up to a chair where the evil Silva almost undresses him while he fondles the chest wounds that he has inflicted upon him, the following conversation occurs:


The very idea that Sean Connery’s Bond (or anyone of his immediate impersonators) might have responded as Craig does is inconceivable. This is truly a new man, vague as he remains, in whom we can only be interested. This time round, without any marvelous new technological weapons and without any of the youthful agility he might have to support him, he survives to plant a simple but efficient knife in the back of this marvelous villain.

The makers of this engaging action movie have also embedded enough clues to future Bond films, asking questions such as “why Bond’s parents were murdered?” and who, actually, is the new M, Gareth Mallory (Ralph Fiennes), a former lieutenant colonel in the British Army, to pique our interest for future manifestations of the franchise. Even more intriguing to me, is the possibility of once again encountering Bond’s family’s former gamekeeper, Kincade. It is so wonderful to see the heavily bewhiskered elderly Albert Finney once more on British soil that it recalled for me his puckish, slightly pudgy, adorably cute Tom Jones all over again.


I look forward, for the first time in decades, to more Bond episodes, with the vulnerable but eternally encased action hero in his uncreasible silk suit on my local screen. His aging heroics are quite perfect for our time—an agéd population after all.