the queen bows
by Douglas Messerli


Stephen Frears’ 2006 film, The Queen, with a script by Peter Morgan, is in essence a comedy (a work in which the characters triumph over adversity, ending in a happy conclusion) and, in many senses, a one-liner at that: The Queen, caught in the trappings of the late 19th century, is suddenly forced to come to terms with the late 20th century if the monarchy is to survive.


For all the simplicity of the movie’s subject, however, The Queen succeeds in providing a substantive entertainment, in part because its heroes are world figures of our own time, and, however inconsequential to the real events each of us is, we feel as an audience both within and outside of the theater, that we had a vicarious role in the events portrayed. And then, of course, there is the voyeuristic joy of being invited into Queen Elizabeth’s Balmoral Castle as well as into 10 Downing Street! 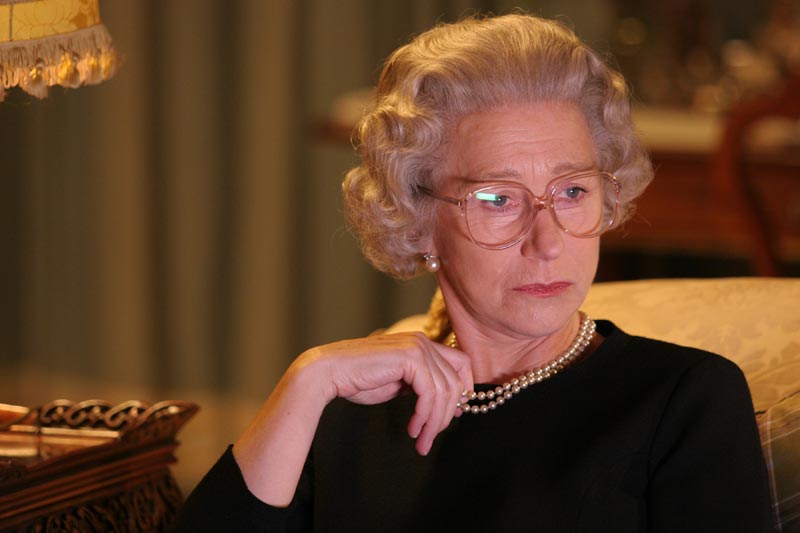 In response to the shocking news of Princess Diana’s death, delivered with utter discretion by the Queen’s personal advisor, Robin Janvrin, Elizabeth can barely hide her dislike of her former daughter-in-law. Her comment to her son, “Charles, isn’t this awful,” seems to express more of her feelings about a new scandale than it does about a beautiful, young ex-princess’s death in a horrible accident. She clearly is determined to have little to do with the whole event, passively awaiting the Spencers’ decision concerning the funeral, while Charles awkwardly scuttles to Paris to bring back the body.


Enter the hero to save the day, the newly-appointed Prime Minister, only too ready to play the touchy-feely “teddy” Blair the British public evidently seeks. “She is the people’s princess,” he declares—a phrase that endears him to the public, but one also that linguistically pits the people against the royals. Blair’s wife, indeed, is presented as a virulent anti-royalist, mocking even the early vague attempts her husband makes in order to save the addled-brained “nutters” from themselves. 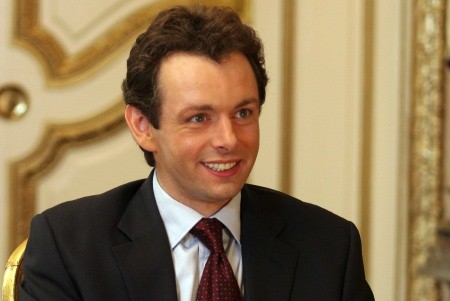 There is no question that the death of a princess, clearly tortured by the disdain and outright hatred of the royal family, a woman hounded by the press, who—despite the drunkenness of her car’s chauffeur—still played a role in the crash of her automobile, was a sad and perhaps tragic event. I still recall going to bed on the west coast of the US with the belief that she had survived the accident, only to discover later the next day (our morning paper often arrives after I leave the house) the sad news that she had died.


Yet as the public adulation (in the US and as well as in Britain) rose seemingly by the hour, and the comparisons of Diana with Mother Theresa and other saintly figures grew, I felt perhaps a bit of the royals’ confusion. Had this woman been so naïve upon her marriage to Charles, that she had expected her life to be lived in privacy? Had it never occurred to her before her marriage that the royal family would not permit easy assimilation? Hadn’t the princess sought out much of the press attention, using the press to her advantage, both within her marriage and since? If Charles had shown himself to be a whimpering, cheating spouse, hadn’t she also, in her own extra-marital affairs—replete with letters and telephone calls—shown herself to be, to put it nicely, a horribly failed being. As for all her supposedly wonderful charitable acts, wasn’t that a role played by the entire royal family?


Clearly her public saw Diana through a lens as strangely distorted as the Queen saw her own people. “I think the less attention we draw to it, the better,” declares her Majesty of the death, completely out of touch with her countrymen. No flag is flown at half-mast over the Royal Palace since the Queen is away—away in more senses than one; and as the floral tributes to Diana quickly grow from a trickle of the public’s affection into an absolute avalanche of grief-filled expression, the Queen retreats further and further into the behavioral ideals of the past.

If one had doubts about the sanctity of dear Diana, one must also wonder about the royal family’s bunker-like mentality. Just four years previous even the Queen had had to admit an Annus horribilis in describing the year in which her second son, the Duke of York, divorced his wife Sarah (who, later that year, was pictured by the tabloids in a topless bikini kissing her friend, John Bryan); the Princess Royal divorced her husband Captain Mark Philips; Windsor Castle was badly burned in a fire; and Diana and the Prince of Wales separated. Hadn’t that impossible year taught her that you can’t hide from the press, that to do nothing was to admit everything? Certainly by this time, she might have discovered the values of the day were no longer those of her youth.


Morgan’s script, perversely, focuses on Elizabeth’s insistence upon silence against the hordes who, as Prince Philip puts it, sleep in the streets, “pulling out their hair for someone they never knew.” Lunacy clearly has won the day.


Thank heaven, accordingly, for Helen Mirren, who portrays this out-of-touch monarch with true dignity and respect—performing alternately with reserve and imperious disdain. Against this near-perfect interpretation, Michael Sheen almost impishly interprets that most common of commoners, the slightly bumpkinish Blair, as a man of the hour, a figure who, if he didn’t exist, might have been created by the tabloids; accordingly, Blair is quite able to manipulate the press in his favor. At first, indeed, he almost seems to get a perverse joy out the Queen’s refusal to publicly express her grief. But almost as quickly, he perceives as a politician that it is crucial to save this great shadowy monarchy—if only to cast it as a backdrop against his shining light.


After several failed attempts to grasp the situation, the Queen struggles to comprehend her free-fall from grace. In the film, her vision comes in the form of a great stag she accidentally encounters after her car stalls mid-river; Prince Philip has taken Charles’ sons to seek out and kill the stag, but as that animal now appears before the Queen, she recognizes in the majesty of this beast something akin to her own position, that that remarkable survivor must be saved, and she quickly shews it away for its own protection. When the Queen finally bows, agreeing to leave Balmoral to return to the Palace, she first pays homage to the carcass of the stag, shot not by her own family, but by a visiting American tourist


The hate she discovers embedded in the mountain of floral tributes outside her London residence is terrifying, and, as she turns, offering to place the flowers a young child holds in her hands upon that sacrificial heap, for an instant Mirren registers even greater pain in response to the young girl’s negative reply. In fact, the flowers are meant for Elizabeth herself. It is her presence, she and we both come to understand, which the masses truly seek.


So, too, some time after Diana’s funeral, does Blair seek out that presence—it is, after all, his job to consult with the Queen. But it is apparent that he also seeks some tribute, some recognition for having saved the monarchy—if nothing else, a pat on his obedient head. Elizabeth gives no such bone to her faithful dog. If she has been forced to bow to her public, as Mirren portrays her, the Queen now stands again at full height, reminding her Prime Minister that it is to her he must bow, and the film ends in the hilarious pan of the camera as she, “a walker,” quickly moves forward, he trotting after.


If this film is not particularly profound, it does raise several interesting questions, most notably how the monarchy can remain out of necessity aloof and separate while performing the tightrope walk of empathizing and communicating with its subjects. There is always the problem that in bowing to the public’s desire for the Queen to share their grief, fears…etc., her Majesty will be transformed from a sovereign figure into simply a person of great wealth. In the particular instance of Diana’s death, moreover, the Queen seemed unable to perceive that Diana had been created by the royal family themselves, that through her marriage to Charles this young woman had been elevated to royal status, and that no matter how much the Queen detested Diana and her behavior, as a member of the royal family, Diana had married them (even if divorced the year before from the Queen’s son) until death do them part. Accordingly, the Frankenstein the royals had created and loosed upon the public could not simply be ignored or disavowed. The public, moreover, saw Diana less as a Frankenstein (or less as a Windsor or Mountbatten—more ghoulish perhaps even than a Frankenstein!) than as a loveable monster, a beautiful, spoiled girl, nearly destroyed by her creators. Like the monster of Mary Shelley’s mythic tale, Diana perhaps had no choice but through her life-style to seek out her own destruction; whatever happened in the Alma tunnel of Paris that dreadful night seems almost inevitable in hindsight.