Cllint Eastwood | Flags of Our Fathers / Letters from Iwo Jima


True to my pattern of doing things, I saw Clint Eastwood’s magnificent diptych, Flags of Our Fathers and Letters from Iwo Jima in early 2007 in the reverse order from which they were released. After seeing Flags of Our Fathers (the second film of my viewing), I observed to my mate, Howard, that had I seen that film first, I might not have been so eager to see its companion. That is not to say that Flags is not a significant film, but simply that, without the context of the more coherent and darker second work, it functions in a much more scatter-gun, even disjunctive manner that is simply not as fulfilling to its audience.


Actually I believe Eastwood has made an important statement in the structural differences between the two films. Recognizing these two works as opposing representations of the same series of incidents—the battles at Iwo Jima occurring from February 19 through March 24, 1945—we quickly perceive that the American version, Flags of Our Fathers, is presented from the viewpoint of how Americans in general perceived the event at the time, as part of a grand heroic effort to defeat the Japanese. 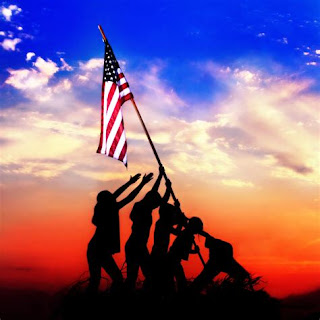 Associated Press photographer Joe Rosenthal’s picture of six men hoisting the flag into position atop of Suribachi mountain quickly consolidated the actual battles into an icon of the hallowed values for which American soldiers were fighting.  The three individuals in that picture who survived the Iwo Jima invasion, John “Doc” Bradley, Rene Gagnon, and Ira Hayes, accordingly, were immediately recognized as representatives of what most Americans sought, living manifestations of the heroism of their young men and women in World War II. Higherups, moreover, recognized these men as the perfect salesmen in the pitch for American War Bonds to raise monies desperately needed to continue the war effort.
The truth of these events was quite different. Forgetting for the moment that in a matter of 37 days nearly 30,000 men (6,891 Americans and close to 22,000 Japanese) had been killed and another 18,070 wounded, and focusing only on the famed photograph, there had in fact been two flag raisings, the first, a more instinctual act of claiming the island with a smaller flag tied with rope to a shell casing, the second, a military-ordered raising of a larger flag (to be rewarded to an observing congressman)

carefully staged for the camera. Moreover, one of the men reported to have helped to raise the second, now iconographic flag, actually helped raise the first, and the name of a marine raising the second flag was omitted in military reports. The men who had survived the ordeal all recognized that there was little “heroism” in raising that second flag (or, for that matter, in raising the first), while the acts of all the soldiers—including their own—involved in actual battle represented what might really be thought of as heroic. Of the three survivors, Ira Hayes, of American Indian heritage, wanted nothing at all to do with the wartime pitch; the other two, medic Bradley and Gagnon—the latter presented as a naïve and somewhat dim-witted solider (assigned the position of a “runner”), participated with a sense of increasing disdain and distress for their ballpark reenactments and celebrity status.


In the American experience of the event there is little coherency. While the three soldiers relived nightmarish scenes from the battle, the public in general saw the battle only through the lens of a split-second photograph. The press conjured up “a truth” out of unrelated events (such as Gagnon’s marriage and Hayes’s apparent alcoholism) before completely dropping their coverage. It mattered little to the military, the press, or the public that these men’s lives had been utterly transformed or that perhaps their real heroism related less to the war than simply withstanding the onslaught of publicity heaped upon them.


Ultimately, it was left to their sons and daughters to piece together—through interviews and a book publication—any sense of reality of the Iwo Jima battle. Heroism, Bradley’s son suggests, was not a unifying force; it meant fighting with and saving, if possible, the men immediately closest to one in battle, protecting and saving one’s friends. For the individual soldiers, the public displays of nationalism were not what they had fought for. There is a strange (if predictable) homoeroticism to the young soldiers’ oceanside swim soon after the battles that Eastwood presents as the image of friendships behind some of these men’s  heroic exploits.


The Flags version of Iwo Jima, accordingly, presented in disjunctive pieces and viewed from various angles and perceptions—from the viewpoints of individuals, friends, the military, the national public, the families, and history—is a narrative without the possibility of a unifying vision.


Contrarily, Letters from Iwo Jima reveals events primarily based on the letters of three soldiers writing their loved ones back home and other unmailed letters later discovered buried on the island, and for that reason presents a much more intimate portrait of military men, many of whom knew they were doomed to die in the battle.

Unlike the American presentation of the Iwo Jima slaughter, moreover, Letters has at its center two great military leaders, Lieutenant General Kuribayashi Tadamichi (stunningly portrayed by Ken Watanabe), commander of the Empire of Iwo Jima, and Baron Nishi.


Nishi, a great horseman, winner of the 1932 Los Angeles Olympics, and celebrity of Japanese culture, knew English and had befriended, before the war, numerous American film actors such as Douglas Fairbanks and Mary Pickford.


Kuribayashi, assigned by Hideki Tojo to defend Iwo Jima, had spent part of his education in Canada, and, in 1928-29 served in the United States as a deputy military attaché, traveling throughout the country. Kuribayashi, accordingly, knew well the American state of mind, and through careful study of US military strategy, was able to determine on which shore the Americans would land. As opposed to the standard strategy of entrenching opposition soldiers near the landing point Kuribayashi catacombed the local mountains as a fortress, thus allowing for a longer survival time for his soldiers and a high ground from which to shoot and kill the American enemy.
Even though he was of samurai and aristocratic descent, and was one of the few soldiers who was granted an audience with Emperor Hirohito, Kuribayashi had opposed the war with the United States from the beginning and had fallen into opposition with numerous colleagues. According to scriptwriter Iris Yamashita and director Eastwood, moreover, he opposed the traditional self-immolation upon failure in battle, arguing that instead of destroying themselves, the troops should move forward or retreat to a place of better advantage.

One of the most terrifying scenes in both films is the reference to and depiction of the self-destruction of a Japanese platoon as, one by one, they discharge grenades against their heads or torsos. Two soldiers in that group do not choose to “die honorably.” One of the major figures of Letters, Saigo, formerly a student in Japan’s prestigious military school, along with Shimizu save themselves and, ultimately, rejoin Kuribayashi’s forces, only to be threatened with death by a lieutenant of the old school. Saigo’s and Shimizu’s lives are personally spared by Kuribayashi, representing, in Saigo’s case, the second of what will be three of Kuribayashi’s interventions on his behalf.


Eastwood painfully demonstrates the horrors of war when these two soldiers later determine to surrender. Shimizu escapes and is captured by the Americans, only to be killed by two American soldiers under whose protection he and another man have been assigned. Although there have been many films of the past that revealed the absurdity of war, the brutal killing of this young man by Americans reverberates in a way that can only call up similar shocking events in Viet Nam and our current Iraqi invasion. Americans, we have had to recognize, are not always the “good guys” we like to think they/we are.


In the United States it is amazing that Eastwood’s eloquently sympathetic presentation of enemy combatants has received so little negative reaction. Japan, one must recall, was one of the few countries ever to actually attack Americans on their own soil! Perhaps it is a testament to the director’s honesty and integrity. One wonders, moreover, how this film is being perceived in Japan, where it is still generally believed—although his body was never discovered—that Kuribayashi committed seppuku, the ritual suicide of the samurai. In Eastwood’s version the general dies before he can destroy himself, to be buried by the loyal Saigo, who, recognizing the general’s gun hanging from the belt of a conquering American, springs into his first actual attempt at combat with “the enemy” before he is quelled, to become one of the few Japanese survivors.


The letters, intimate communications between wives, sons, and others, create a coherency not to found in the American version of war. While the Japanese Kuribayashi goes to his death knowing that he has attempted to communicate with his beloved son Taro, for the American soldier Bradley, up until the last moments of his death, there is a feeling of having been dissociated from his own son, of having so buried the war within his own being that he has remained at a distance from one so loved. It appears, Eastwood suggests, that a culture that prefers flags to letters, a culture which offers up symbols as opposed to simple human expression—the culture of my own father—is doomed to estrangement.*


* One must recognize that Japanese culture is also highly involved in and enchanted by symbols, a point Eastwood brings up in his film. As a young military student, Shimizu is commanded to enforce the rule that all houses display the Japanese flag, an incident which, when he also is commanded to destroy the family’s dog—an order he disobeys—results in his dismissal from military college and in his being posted to Iwo Jima. It is particularly notable, therefore, that the three major figures of Letters from Iwo Jima spend their last days in epistolary communication.