if only my mother could see me now

If there was ever evidence that Bresson’s films are unlike anyone else’s, one need only watch his A Man Escaped. On the surface this is one of hundreds of a genre of prison escape movies and part of a smaller genre of “escape from the Nazis” films. Generally these pictures center their interest not only in the methods of the escape but on the incredible adventures surrounding their heroes’ larger-than-life accomplishments, displaying loud scores and casts of dozens, while focusing on the startling exploits of those who achieve the impossible. 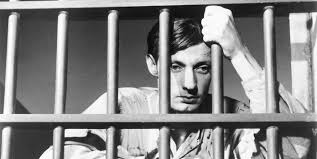