Jean Grémillon’s profound and uplifting film, Le ciel est à vous, was the third of his major works created during the Vichy rule of France. The movie begins with a series of visual images and a song that quite strongly establishes some of the underlying issues of this work. A group of orphanage children, under the imperious observation of a priest, are “playing” in the local countryside is Southern France. But the play is one of enforced organization and the boys, holding hands, spin in two directions in an inner and outer circle. Clearly one can read this as a kind of visual metaphor for the wheels, tires, and machines at the center of this work; but the image also suggests, in its two opposing rings, in a somewhat more subtle reading, a country which is currently a kind of bigamist, its people married both to the France of the past and the Germany of the present.
Soon after, the children are freed to collect their capes, before they are collected by the priest into a kind of army formation, marching back to the town where their orphanage lies, singing a song that is focused upon “restrictions”: “No my daughter, you shall not go dancing.” Something is clearly wrong in this kind of constricted playtime.
The very next scene reveals a family on the move, forced out for the construction of a new air field. Although both the Gauthiers (Thérèse and Pierre) seem outwardly in good spirits, we can see in their faces and in their children’s actions their fears and simple weariness. Pierre (Charles Vanel), an automobile mechanic, packs up a cart and his family auto, returning with his son to gather up just a few more pieces of junk (“you never know when they may prove useful”) while his wife (the marvelous Madeleine Renaud) and her always complaining mother (Raymonde Vernay) drive off, more worried about her family’s piano than anything else. Before they can even reach their new apartment, the workers, finding it impossible to deliver the piano by the stairs, have raised it by pulleys into the air in their attempt to deliver it through a window. Of course, it drops and is destroyed. 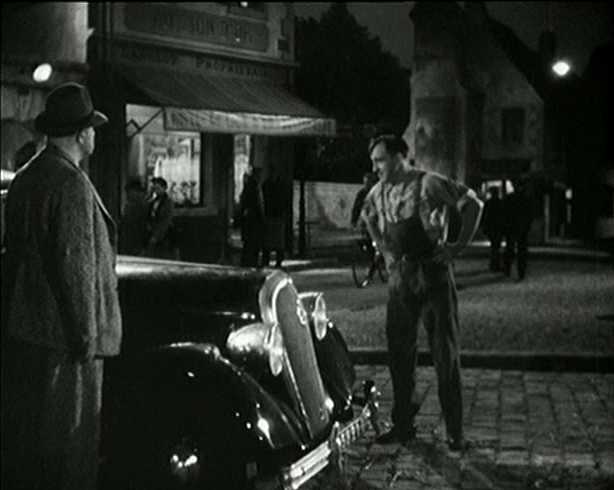 With continued good spirits the couple and their children move into their new place, which contains a garage. Will they be able to afford the rent, they ponder. Although exhausted from the move, Pierre has little choice but to take on the job of repairing a car a wealthy man delivers up to them, working through the night with his wife at his side. We immediately perceive, accordingly, just how hard-working this family is. A few scenes later they have clearly made enough to settle in and even buy a new piano along with the lessons from a local piano teacher for their talented daughter.
The man whose car Pierre has repaired, it turns out, runs a garage in a nearby village, and is so impressed by his abilities that we would like to hire him. Yet the family stays put, Pierre working hard, but increasingly sneaking off to the air field. He loves planes, so we discover, having been the mechanic for a notable flying hero in World War I. Thérèse, however, does commute to the nearby city, working for the gentleman as a very successful car salesperson.
She increasingly finds it difficult to reach her husband by phone, and, ultimately, some rancor grows between the couple, particularly when she returns home to find he has spent many of their days apart flying and teaching others how to fly. Not only is she rightfully fearful for husband’s dangerous hobby, but she is somewhat resentful for now being the major money-earner of the household, while forced to spend time away from her children.
Her son, in her absence, is ill with a cold. Her daughter, studying as a pharmacist, would prefer to attend the music conservatory, which she is encouraged to attend by her teacher. Although Pierre has apparently given his permission for her to change her life course, her practical-minded mother refuses, ending the lessons and locking up the piano. Suddenly we note the significance of the restrictions of the very first scene and a kind of reiteration of the children’s song about dancing. This shift in the family’s placid situation is most clearly expressed in Thérèse’s drive to the airfield to collect her husband and bring him home.
Pierre, however, remaining calm, attempts to explain his love of airplanes, arguing that the War has represented some of the happiest days of his life. When he finally coaxes Thérèse to join him in a flight, he immediately wins her over, as she is utterly thrilled with the brief voyage into the sky.

Again the film tilts yet in another direction, as the previously earth-bound mule of a worker is suddenly obsessed with the freedom the sky proffers. She quickly learns how to fly, and begins a series of spirals, spins, rolls, and tumbles through the air, picking up prizes in aviation again and again.
Sadly, however, her daughter, equally obsessed with music, must secretly visit her teacher in order to play the piano. He, for his part, assures her that “small towns need girls like [her] so that the best things in life may continue.” However, her obsession in this film is quite ignored as her mother becomes determined to take on an even greater challenge of flying further that any other aviatrix. In order to do that, the couple must purchase and retool a plane. The piano is sold, other pieces of furniture going with it, as the two apply for city loans and grants, supported for by a local town counselor, Noblet, an admirer of aviation. But just as they complete their plane, Noblet dies, and the grant is cancelled. Another noted aviatrix arrives in town, dominating the press coverage and succeeding it going the distance.
Soon after, however, Thérèse becomes determined to make another attempt, and in near silence, no press recording her takeoff, flies off for the record. For days nothing is heard from her: the plane has no radio. Pierre returns home to his children and his mother-in-law, she abusing home for allowing her daughter to attempt the flight. Others call to criticize him as well, and he forced to take the phone off the hook. Upon observing a crowd gathering outside his home, he becomes determined to meet them, arguing, one presumes, his and his wife’s viewpoints. The crowd, in turns out, has gathered to celebrate the news they have heard: Thérèse has succeeded in going 3,000 miles, a distance beyond any previous female flier!
So does Grémillon’s protofeminist hero symbolize all the unspoken desires of occupied France, affirming the fierce spirit of French citizens. Yet I could not help, despite this strong affirmation, noting the still unexpressed desires of so many that remain unable to play out their obsessions, like the Gauthier’s young daughter, Jacqueline, who has been told throughout the film, that she cannot go dancing. Surely the director, himself trained as a musician, cannot have helped but have noted the painful inequality between that young girl and her powerful mother. Perhaps only when French freedom is achieved, he suggests, can Jacqueline also join the ball.

Los Angeles, Memorial Day 2013
Posted by greenintegerblog at 7:52 AM