In one of only two of Fassbinder’s collaborative films, he and Michael Fengler focused on the story of a hard-working, ordinary man, an architectural draftsman, whose life slowly comes apart, resulting in a shocking series of actions.


Except for the outline of the story, most the film’s dialogue was created on the set in improvised collaboration with the film’s major actors, including Kurt Raab (as the central figure), Lilith Ungerer (as his wife), Fengler’s son Amadeus, Franz Maron (as the Boss), Harry Baer (as an office colleague), Peter Oland (another office colleague), Lilo Pempeit (as the beloved office typist), Hanna Schygulla (as the wife’s school friend), and numerous others—most of whom use their real names throughout.


The movie begins with four jokes, the first about blindness:

You hear the one about the guy who goes into a bakery,
Orders a loaf of bread? “White or black?” the baker asks.
“Doesn’t matter,” the guy says. “It’s for a blind person.”


The second joke is about a horse long enough to seat 8 people, which reveals the subject’s general ignorance of the species; the third, about a young boy who asks how far it is to America, his mother answering, “keep swimming”—a joke about, as writer Jim Clark suggests, futility. The third is about a man murdering his wife. In a sense, these jokes, shared by Raab’s office mates, Harry Baer, Peter Oralnd, and Lilo Pempeit, as they leave the office walking through a dreary side street in Munich, serves almost as an overture to the film we are about to see. And  the film in general, like these quips, seems to be comic. 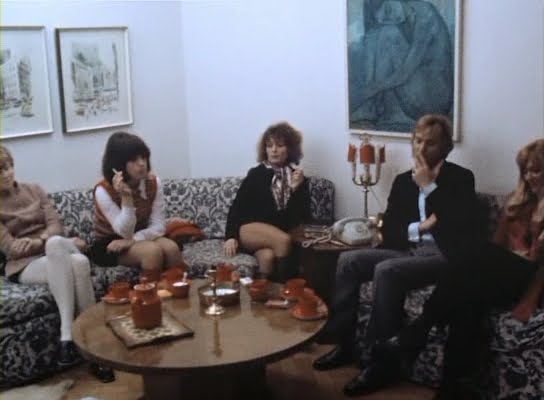 Although Raab, in one of the first scenes of the film, tells his wife that he is tired, that he is overwhelmed by his work at the office, she, a beautiful Scandinavian-like blonde, remains supportive—even though she, clearly the driver in the family, has just had a minor accident. Her beauty and faithfulness to her slightly overweight and dowdy husband remains throughout the picture, and seemingly gives support to her husband’s gradually deteriorating life. Although her friend, Hanna Schygulla, staying with them for a couple of days, evidently “does nothing” for a living—Raab slightly poking fun at her somewhat empty life (“You’re a step ahead of us, an independent being.”) it is a mild rebuke without deep bitterness—Raab seems comfortable with the somewhat provocative guest.


Another scene, in a record shop, where Raab attempts to find the record of a song he and his wife have heard on the “hit parade,” continues the bubbling sense of irony, as the two young shop clerks giggle about his old-fashioned taste in music. But the record, which he nonetheless does find, is to be a gift for his wife, and, despite the slight mockery of two women, he comes off in good spirits, bringing home a present which, momentarily at least, reminds the two of their romantic youth, “Ages ago.” 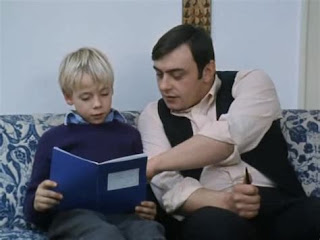 Raab suggests that he will soon be sent to the main office, where he hopes that his job will entail more variety and, perhaps, even a higher salary. And his wife shares his good prospects in imagining a new apartment and even new furniture to go in it.


His parents, visiting the couple, seem, at times, a little unpleasant, but they clearly dote on their grandchild Amadeus and begrudgingly admire their son’s choice of a wife. Oma (Maria Sterr), however later becomes more critical, particularly when, during a forest walk in the snow, Amadeus goes temporarily missing, suddenly determining to play hide-and-seek. A school teacher complains that Amadeus, although intelligent, is inattentive, sometimes even forgetting the questions she has asked; he also has difficulty saying the German SH sound, although is not taunted by the other students for this defect. Like his father, the boy is sometimes quiet and a bit unsociable


Gradually, we perceive that the superficially normal and well-established routines of the Raab household are confining and frustrating for both husband and wife. Lilith complains of another friend, who is “hysterical.” Raab is gently upbraided by his boss for not being able to put his architectural renderings in three dimensional concepts. Raab admits that he prefers drawing windows to the walls which he is assigned to create.


On the street, Lilith desires consumer objects which the couple can ill-afford. In one particularly revealing scene, apartment friends gather, bitchily commenting on Lilith’s husband’s increasing weight, the wife’s lack of cultural involvement, and other issues while Lilith projects the myth that they will soon be moving to a larger apartment, seating herself next to a neighbor’s husband, who seems far more accommodating that the two critical women friends, particularly when they begin to speak of Amadeus. 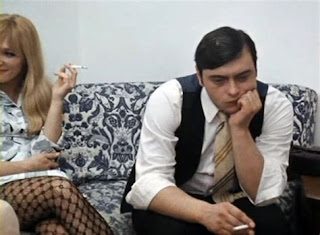 A bit like a predetermined automobile crash, which apparently has occurred to Lilith before the movie has begun, Raab gets drunk an office Christmas party, attempting to toast his colleagues—one already passed out at the table—while his boss and his sister grow more and more uncomfortable as Raab rambles on, trying to speak lovingly and kindly of his “strict” boss, characterizing him as a friend at the very moment the couple determine to hurry away from the event. Raab’s cry, “We could have been buddies,” reveals, like the joke about the horse, just how unacquainted he is with the “beast” he has tried to ride. The futility of his act, an attempt of a usually taciturn man attempting to speak out, is represented by his wife’s bitter comments: “the older you get the stupider, the fatter.”


A visit to the doctor reveals that Raab suffers from severe headaches and high blood pressure, but the doctor’s only suggestion is that the patient give up liquor and—even more importantly, in a film where absolutely everyone except the child consumes dozens of cigarettes in constant clouds of smoke—tobacco.


If the events of the film have grown increasingly serious and tense, the attentive viewer has felt this intensity in numerous other ways through Fassbinder’s and Fengler’s often hand-held, documentary-like camera, in which, time and again, Raab is kept slightly out of the picture. Focusing on two or three figures at a time, the director’s frame keeps his central character at the edges, holding on the periphery a man whose very job is to represent every door, window, and wall. In the rooms he actually inhabits he has hardly any space in which to live. Throughout, it is as if not only that Raab is one of the quiet beings at the edges of life, but is simply not heard. During a long and painful scene in which he sits with an old friend talking about their school days, when they were forced to attend Sunday church services where they sang “when grief and pain oppress me,” Lilith sits apart on the couch in clear disgust of their shared and distant memories.


On the other side of the coin, the long penultimate scene of the film presents us with a nearly unbearable “friend” of Lilith’s, again comparing her evidently more affluent life with the more sedentary world of her friend. Little by little, she describes her vacations: “I can think of nothing but skiing.” In a long story—as Raab, again almost erased out of the scene as he attempts to watch television—she recounts how she learned to ski, going through everything from her flirtatious affairs with her ski instructor to the names of several skiing actions she experienced before proclaiming, finally, her new achieved skills, where she ultimately goes “over the moon,” clearly representing the thrill of making the long plunge down the mountain, adding, almost as a coda, the needed acquisitions: “I bought myself new skis, steel ones, and ski pants.”  Still at the edge of the film’s frame, Raab’s movements are barely sensed, as he lights a metal-casted candelabra before, suddenly appearing at the other end of the screen, he moves toward the guest, pounding the object into her head. As Lilith appears, he repeats the action upon her, before, slowly and carefully entering his son’s room, from which he perceive through his shadow, the action is repeated.


Showing up at the architectural office, the police report the three murders, questioning Raab’s boss and colleagues before they are told that Raab is in the bathroom. After a long pause, the police break into the toilet, only to find that Raab has hung himself.


The actions we have just witnessed, as critics have observed, make us reread the entire film. Why did this ordinary man, we can only wonder all over again, truly go amok. One might be tempted to read this work as a kind of black comedy in the manner of Joe Orton’s plays—if only the slow mounting evidence of the societal abuse of this everyday human being were not so painfully tragic. At work’s end we can only read the voyage “over the moon,” as a trip into sudden lunacy, a break out from the stale and claustrophobic world in which Raab has lived his entire life into a downward slope directly into death.