Jacques Tourneur | Out of the Past

in the frame
by Douglas Messerli

Daniel Mainwaring (screenplay, based on the novel, Build My Gallows High by James M. Cain, with uncredited writing by Cain and Frank Fenton), Jacques Tourneur (director) Out of the Past / 1947


It’s interesting that in the vast majority of American film noirs, it is the women who betray the heroes, usually world-weary gumshoes or seedy punks who are taken advantage of by wealthy crooks or society figures; the women surrounding them lie and murder, leaving the male figures very much “framed” and in the lurch. Never has this fact been made more apparent than in Jacques Tourneur’s masterful 1947 film Out of the Past.


The “hero” of the film, Jeff Bailey (Robert Mitchum) has, in fact, attempted to escape his shady past with a move to the small paradisiacal town of Bridgeport, California, where he now runs a gas station, fishes in the nearby pristine creeks and rivers with a young boy who can neither hear nor speak (Dickie Moore)—the perfect fishing partner, one might argue—and has fallen in love with a local girl, Ann Miller (Virginia Huston). In this prelapserian world, he has almost able to create a new life; but before the film can even begin, we are introduced to the hulking figure of Joe Stephanos (Paul Valentine), a well-dressed stranger on the prowl for Jeff, whose past, we quickly perceive, has suddenly caught up.


The rest of the film is swallowed up in the story of that past and its continuing consequences, which, as in nearly all such films, ends, through the fewer and fewer choices available to its central figures, in death. A great part of Jeff’s (whose last name, as he tells Ann, is really Markham) story is presented as a kind of confession to Ann, revealing how he was hired by Whit Sterling (Kirk Douglas) to track down his girlfriend, after attempting to kill him (shooting him four times) and stealing $40,000 of his money.


Not really wanting the job, but unable to turn down such a large payment, detective Markham tracks down Sterling’s girl, Kathie Moffat (Jane Greer) in Acapulco, where, under a more brutal sunlit landscape, Jeff is forced to spend his days drinking as he waits to encounter Whit’s woman friend. When he does finally track her down, it is almost love at first sight—at least for him—as Kathie slowly tells her side of the story, insisting that although she had tried to kill Whit, she has stolen no money:


Kathie: But I didn’t take anything. I didn’t Jeff. Don’t
you believe me?
Jeff: Baby, I don’t care.


Together, the two plan escape back to the States, but at the same moment Jeff encounters Whit and his henchman in Acapulco, checking up on him. Again, Jeff asks to be released from the case, but Whit refuses. Insisting that Kathie has slipped past him on a steamer heading south, he hurries off with Kathie to San Francisco.


The San Francisco in which this couple hides out, is not the brightly lit city of Northern California but a dark, hidden world, was the two attempt to escape notice. When they temporarily let their guard down, they are spotted at a race track by Jeff’s old detective partner, Fisher, who was to share 50% of whatever Jeff got for bringing by Kathie. The two break up, taking different routes to a rural cabin in order to get Fisher off their track. But when Jeff turns up to the cabin wherein Kathie waits, Fisher is already there. As the two men begin a fistfight, Kathie picks up a gun and shoots Fisher dead, and Jeff suddenly realizes that she has not only lied to him about stealing Whit’s money but has now framed himself for Fisher’s death.


So Ann and Jeff arrive, back in the “present,” to the dark grille of Whit’s country estate, the grille itself reminding one of the long act of confession we have just experienced. At Whit’s house, Jeff finds, unexpectedly, Kathie once again living with her former boyfriend. She has made the convenient choice once again.

This time Whit is in trouble with the Federal government for failing to report taxes, and his crooked lawyer, Leonard Eels, is blackmailing Whit for more money. Again Jeff attempts to escape his fate, but realizes that if he does not help he will be accused for having killed Fisher.


This time the world-weary Jeff perceives it as another frame-up, and back in an even darker San Francisco tries to warn Eels of the danger he is in. Another woman, Eels’ secretary, Meta Carson (Rhonda Fleming) is involved this time around. Like Kathie, she is willing to kill her boyfriend, and does, as Jeff slips back into Eel’s apartment to find him dead. Hiding the body, he slips into a nightclub where Whit’s documents are kept—along with an affidavit that Kathie has signed insisting that Jeff has killed Fisher. 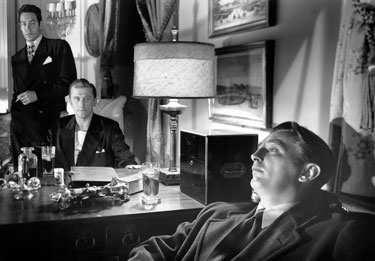 Again on the run, Jeff returns to the nearby Bridgeport streams, joined by his friend, the Kid. But unknowingly to him, Kathie has ordered Stephanos to trail the kid, who leads him to the river where Jeff is fishing. Stephanos, about to shoot Jeff, is spotted by the Kid, who send the tackle and hook of his fishing rod up to the rock where Stephanos stands, about to shoot, causing Kathie’s henchman to fall to his death. 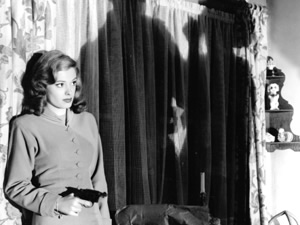 Back at Whit’s, Jeff attempts to convince Whit of Kathie’s double cross, trying to convince him of her murder of Fisher. But when he returns again to Whit’s Lake Tahoe house, he discovers that Kathie has killed Whit, and that she is now in charge. Either Jeff joins her or she will accuse him of all three murders! Finally, Jeff has no escape left—except to secretly call the police and warn them of their route.


Suddenly observing the roadblock ahead, Kathie realizes that she has been betrayed, and shoots Jeff dead. The police kill her, beside her a large cache of money has fallen from her purse.


After Jeff’s funeral, Ann attempts to make sense of events, while her boyhood lover, Jim, tries to convince her to now to turn her attentions back to him. Asking the deaf boy whether Jeff was truly running away with Kathie at the time of his death, Ann eagerly awaits his response. The Kid sheepishly nods his head “yes,” and she turns back to the town and her ordinary life there. The Kid looks up at the gas station sign declaring Jeff’s name—the same sign that drew Stephanos there in the first place—and salutes it, as if, in his act, he has done Jeff’s bidding in allowing Ann to go on in a life removed of regret and grief.


The plot of Out of the Past, if not exactly opaque or clear, at least makes reasonable sense, especially when compared with works such as The Big Sleep or Welles’ The Lady from Shanghai. But the important structures of this dark work are the film’s movement from light, to a more oppressive light, and into the black of the final last scenes of this film. For the haunted characters, moreover, the work functions almost as a puzzle-box in which door after door closes for each of them, until they are all trapped within each other’s fates. If even one of them had been able to say “no,” or to truly escape—as Jeff has so nobly attempted—all or at least some of them might have been saved. But the events of the past, in this film, are like steel bonds of fate, drawing them again and again closer to each other until they destroy every individual in their claustrophobic circle. Only with the Kid’s final gesture is the past finally over and done with, freeing Ann to remain out its grasp, even while it dooms the true hero to a kind of eternal damnation in the minds of those remaining in the still unfallen world. The only link between those worlds is a young boy who cannot and will not speak the truth. Yet in receiving and hearing Jeff’s confession, Ann has, unknowingly, forgiven him, even if she cannot save him from his past acts, as so too, in attending to this sad tale, has the viewer.