the sleepwalkers
by Douglas Messerli


Winner of the 1985 Palme d’Or at the Cannes Film Festival, then-Yugoslav director Emir Kusturica’s When Father Was Away on Business, at moments, is both a charming portrayal of family life in the Saravejo of the early 1950s, and a painful drama of secrets and lies of the post-World War II period in which Tito was coercing his citizens away from Soviet Communism to the Tito-brand of Communism in which “Tito was the party and the party was Tito.”

It may seem strange today for Americans to think that some preferred the Soviet-style Communism to a home-bred version—often presented as a milder Communism than the Stalin authoritarian rule—but as we know strong dictatorial-run governments, such as Albania and Romania, were often more autocratically run and punishing of its citizens than that those directed from the more-distant Moscow. The movie begins, indeed, with a local farmer singing a song in Spanish since, he argues, it’s “safer.” Even then, he is later arrested for having Soviet Communist material in his home.


So too does Mehmed “Meša” Malkoč (Miki Mianojlović) feel that the Tito government has gone too far with a newspaper cartoon depicting Marx at a desk with a photograph of Stalin upon the wall, expressing his disdain to a mistress, Ankica Vidmar (Mira Furlan) on a train as he travels on business. She is upset that their affair is going nowhere, since it is apparent he will never divorce his wife at home, Sena (Mirjana Karnović) who has borne him two sons, Malik (Moreno De Bartolli)—from whose point of view we see the actions of the movie—and Mirza (Davor Dujmović) who seems destined to become, like this film’s director, involved with filmmaking.


At home things seem quite placid, with a large extended family and friends gathering round the table to celebrate the traveling salesman father’s return home. The food seems bounteous, the conversation joyful, as the scene is played out in a sense of familial pleasure. But gradually women rise, one to read a secretly passed letter from a soldier-lover, another unhappy neighbor entering the bathroom to sneak a drink from her hidden liquor flask. We already know that the beloved father is a sexual philanderer. Things are clearly not as they seem.


When Anika Vidmar comes to town, displaying her aviation skills, it is clear that she has ditched Meša for a higher-up in the government, Meša’s brother-in-law, Zijo. A casual mention of Meša’s reaction to the editorial cartoon brings retribution upon him. But although he is accused of being involved with the Cominform (The Communist Information Bureau, a group advocating shared information among the nine European Communist-run nations), we know that the real reason is Zijo’s recognition that Meša has had an affair with Anika. Meša is sent to a labor camp, for reasons his wife is told very little.


This traumatic event is symbolically brought home to his two sons by their sudden circumcisions by a family member barber, Malik screaming out in terror and pain.* The event and the age of the children suggest what we might already perceived, that the family is Muslim.


To protect her children from worrying about their father’s sudden absence, Sena tells them a lie: their father is away on business. But this lie is far more troubling for everyone involved. The children are lonely and worried to see mother daily often in tears. Suddenly, the table is barer; when Malik attempts to purchase a soccer ball with money he has saved up, his elder brother steals it from him, the two of them returning it to their mother. With no communication with her husband and no knowledge about his crimes, Sena can only suspect the worse, but, when approached, her relative will tell her nothing. As a metaphor for all the figures in this tale, the young Malik begins to sleepwalk, endangering his life by climbing and walking across a train trestle.


When Sena finally is invited to meet with Meša aboard a train near a mine where he is working, their night together is thoroughly interrupted by the somewhat unknowing interference of Malik, who insistently joins them in bed.


Sometime later, Sena and her sons are invited to come and live with Meša in a town in which he is now working, in the industrial town of Zvornik. There life continues, with Malik meeting a young girl his age, the local Doctor’s daughter, Masha Liakhov (Silvija Puharić), with whom the boy becomes infatuated. But even here, information is kept secret, as we suddenly discover the girl is very sick, and ultimately is taken away in an ambulance at the very moment that Malik has rushed to her side.


Suspecting her husband of womanizing, Sena fights with Meša, particularly when he reports he will be traveling to a nearby town noted for its sexual activities. To prove her wrong, Meša takes along Malik. When the father beds a woman, Malik is sent to sleep in the truck under the watch of a friend, who himself falling asleep, suddenly realizes Malik is missing, the boy gone on a sleepwalking prowl once again. His disappearance into the wild ends up with both the men and their whores desperately in search of him.


Sena is now certain of her husband’s infidelity, having previously encountered and challenged Anika in public. Meša can only presume that it is his son who has betrayed him, but it is Zijo who has insinuated the truth.

Sleepwalking through their lives, covering up all truth with the secrets and lies of the society itself, the family figures finally gather at the wedding of Malik’s youngest maternal uncle, where Zijo reveals he is now suffering from diabetes and with whom Meša encourages Sena to make up. Reluctantly, she does so, but as Zijo falls to the table drunk, Meša, once again, seeks out Anika, virtually raping her in the cellar, an act that Malik accidently oversees as his soccer ball bounces against the bars of widow. Afterwards, disgusted by life, Anika wraps the toilet cord around her neck, determined, it is apparent, to commit suicide. But her action simply pulls the metal cord from its connection. And she is left crying in despair, very much alive. 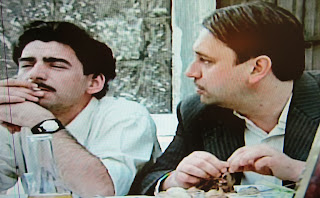 The final image of the film is of the young Malik, his face half-turned from the audience, with a slight smile, as if looking toward to the future but recalling all of these past events with some gentle humor.


That image, in turn, brings up even darker possibilities for this culture than we have been shown in this film. Will Malik become a man like his father, superficially loving his family, but at heart a liar and traitor—not so much of Tito’s government, but his own values—a rapist and a misogynist brute? Although the characters might in no way to imagine it, we know now what ultimately happened to Sarajevo, and how in that world neighbor came to destroy neighbor. There is almost something smug, accordingly, in Kusturica’s final image, a boy who might, with the fall of Tito, desire a Bosnia free from Serbian control. Despite the film’s pretense of familial solidarity and potential forgiveness, the audience perceives just how hateful and deceitful all of these figures truly are—even the seemingly innocent young boy who has witnessed it all.


Although Kusturica has twice convinced the judges of the Cannes Film Festival of his cinematic brilliance, I am still uncertain of his greatness, despite his obvious cinemagraphic gifts. Any man who admires the Russian President Putin as much as he apparently does, can only bring questions to my lips. Apparently, the sleepwalking through history continues.


*This just pre-puberty circumcision was particularly painful for me to watch, since at the age of 14, I was hospitalized to have my tonsils removed, but at the same time, without telling me, my parents arranged a circumcision. Waking up to feel pain in another part of the body was not only a shock to me, but presented me with sense of parental betrayal. I can now understand that my parents didn’t know how to talk about it, how to describe it to me. But, in a sense, I’ve never able to completely forgive them for their silence. All of this was not helped by the fact that for a couple of weeks after, I suffered ether (the popular amnestic drug of the day) dreams. I might also mention that through much of my childhood I sleepwalked, going so far one night to put on an overcoat and attempt to walk into the cold, snow-covered Marion, Iowa streets.