the scent of mimosa
by Douglas Messerli

Dodie Smith and Frank Partos (screenplay, based on a novel by Dorothy Macardle), Lewis Allen (director) The Uninvited / 1944 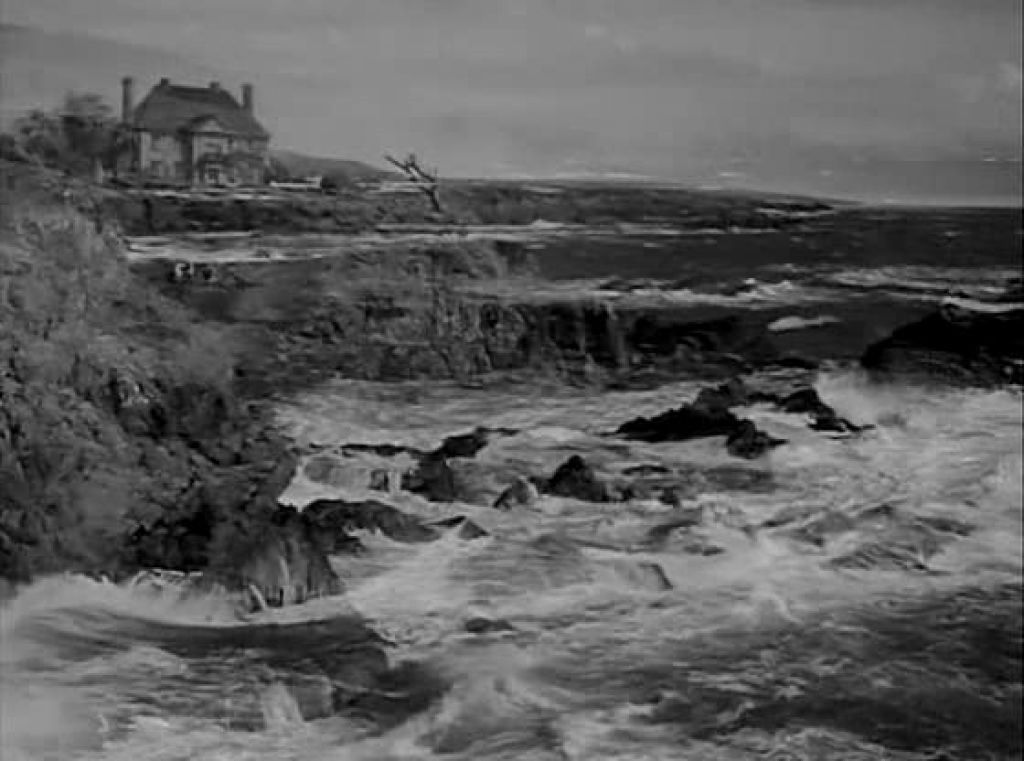 Oddly, one of the reasons that Lewis Allen’s “ghost story” The Uninvited is so successful arises from the fact that this work is so many things, and only incidentally a ghost tale. In fact, there are probably more comic lines in this work than what James Agee described as it “thirty-five first-class jolts” and “well-calculated texture of minor frissons.” One might almost be justified in equally describing the genre of this work as a romantic comedy, or a kind “love comedy.” The major “hero” of the film, Roderick Fitzgerald (Ray Milland) spends much of the movie romancing a beautiful young woman, Stella Meredith (Gail Russell), who just happens to be the grand-daughter of man who owns the house on the Cornish cliffs, Windward, which Fitzgerald and his sister Pamela (Ruth Hussey) buy. One of the longest scenes of the film features a spontaneous voyage which  takes the two out in a small boat, Fitzgerald bragging that he never gets seasick just before he is felled with painful stomach cramps and a soaring headache. Stella must steer the boat back to port. And by film’s end the couple, presumably, do plan to marry, while, very possibly, Pamela may have fallen for the local doctor, Dr. Scott (Alan Napier). 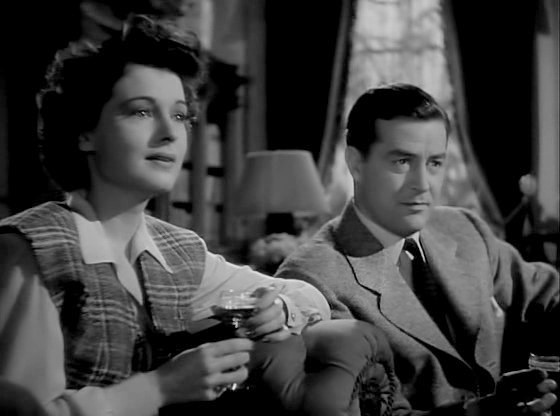 Much of the time, moreover, the “haunted” mansion where the Fitzgeralds now reside is flooded in sunlight—it is, after all Spring 1937 (a time, in this film, where the Nazi threats of World War II seem not to exist)—and the Fitzgerald’s seem well-enough off to have dazzlingly decorated their mansion, eagerly greeting their old Irish servant, Lizzie Flynn (Barbara Everest). The writers, moreover, have provided the couple numerous witty and even silly lines, including Roderick’s suggestion that the strange crying they hear near sunrise may be “a loose ariel” catching the tears of a woman in the village, and Pamela’s plea that if she should lose her mind, do not take her to Mary Meredith sanatorium, run by the terrifying Miss Holloway (the formidable Cornelia Otis Skinner). But even that sinister place might be seen as a slightly satiric poke at psychological institutions, with the head doctor’s refusal to call her residents “patients,” and weekly sessions with her “visitors,” which she describes as “chats.


Never has a so-called “horror film,” as critic Carlos Clarens has categorized it, contained more sunlight and innocent romantic love!

So too does this film—as few other Hollywood-made horror films do—hint at other forms of love which in 1944 might not have survived a good reading at the Hays Office. The most notable of these “hints,” concerns the relationship between Dr. Holloway and the dead Mary Meredith, which is lesbian. Sitting under a over-sized portrait of Mary, painted by Mary’s husband, Miss Holloway recounts their relationship:

Mary was goodness, her skin was radiant, and that bright, bright
hair…. The nights we sat talking in front of the fireplace, planning
our whole lives. It wasn’t flirtations and dresses we talked about.
We were no silly giggling girls. We intended to conquer life.


These women, early feminists, shared clearly an intense relationship which apparently was not lost upon The Uninvited audiences of the day. In an essay by Farran Smith Nehme, published in the informative pamphlet accompanying the new Criterion release, the author quotes from a letter written by Father Brendan Larsen of the Catholic Legion of Decency to Will Hays, head censor for the industry, complaining of special performances of the film: “In certain theatres large audiences of questionabe type attended the film at unusual hours,” attracted to “certain erotic and esoteric elements in the film.” It’s nearly unimaginable that this film might have drawn late-night crowds like The Rocky Horror Picture Show of 1975, but apparently in certain places a lesbian-gay crowd gathered to hear and, perhaps, recite Miss Holloway’s charged speeches. The film, moreover, even hints at a much stranger relationship between the central characters, brother and sister. Why are the Fitzgeralds, both older than the usual marrying age, traveling together on vacation, and why do they so breezily determine to buy the mansion together and live there for the rest of their lives? Nothing further of made of this odd relationship, but it doesn’t erase the questions I just asked, even though they both find new companions in this Cornish town.


Much of this film, furthermore, performs less as a “ghost story” than as a simple mystery, and much energy is devoted in an attempt to unweave its dense and complex plot. We barely hear of Mary Meredith’s night-time death by falling over a nearby cliff into the ocean than we are told of yet another woman in this house, Carmel, romantically described as a kind Spanish Gypsy, who evidentially was the lover of the painter Meredith. By film’s end we can understand why Meredith, given his wife’s preference to the company of the nurse Miss Holloway, might have taken up with another woman, but what is her relationship with Mary’s young daughter, Stella? And why is Stella’s grandfather so determined to keep his young granddaughter away from Windward House? In a town filled with gossip, nothing quite seems credible until, with Dr. Scott’s and one ghost’s help, we uncover further information and are able to piece these romantic and sometimes deadly relationships together. Indeed, director Allen expends almost as much energy on creating the aura of mystery around his work as he creates scenes of actual “horror.” Although a ghost does make an appearance by the end of the work, Allen wanted to keep the visual phenomena out of his film, and oddly enough, the visual manifestation was cut by the British censors, leaving the studio-required image only in the American version.


This film, also, plays, in the way Hitchcock often does, with the psychology of his characters as well. In love with Stella, Fitzgerald is terrified that the young girl is about to have a nervous breakdown, to which the local doctor agrees, worried that it is beyond his abilities to cure her. Stella’s grandfather clearly has similar fears, calling on Miss Holloway to take his grandchild in to sanatorium. Miss Holloway, spouting stock psychological phrases, suggests, for her own evil reasons, that Stella is suffering from a “persecution complex,” and locks the girl away. Both of the Fitzgeralds, moreover, attempt to psychologize the ghostly events going on around them, bravely scoffing at any irrational explanations. When even the serving woman witnesses a manifestation of a ghost, Roderick simply explains that “Lizzie has conjured up a ghost.” 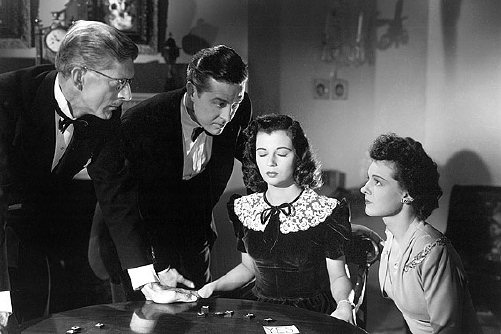 Finally, this is also a ghost story, with not only one but two ghosts, replete with a séance, traveling wine glass, cryptic replies from the dead, and the possession of Stella, who speaks in a kind of hallucinated Spanish. Rooms suddenly grow cold, fresh flowers wither away, crying and moans are heard by all. One ghost, that of Mary Meredith—the beautiful, proud, and cold-blooded woman in life (clearly a figure not unlike Rebecca in Hitchcock’s film of a few years before)—continues her machinations against her daughter in the after-life, drawing her to the edge of the cliff again and again, in an attempt to kill her. The other ghost, overwhelming the rooms she enters with the scent of mimosa—an odiferous legume native to mostly tropical regions, certainly not at home on the nearby cliffs—comforts Stella. Carmel, who has been killed through negligence by Miss Holloway, is there to guard Stella, who, it turns out is her daughter, not Mary Meredith’s; and with that discovery, the ghost of Carmel is released from her earthly bonds. Roderick quickly does away with the other, more horrific ghost, simply through laughter, claiming that laughter shall now become the character of that great house, suggesting that this film, at heart, is truly a comedic work. There is certainly something wonderfully comedic in the film’s denouement that Stella can now be happy knowing she is a bastard child


This wonderful film is so packed with various convolutions that by the last frame we don’t really care how we should describe it. It is a work simply packed with sometimes contradictory forms, made all the more loveable by refusing to settle down into a single cinematic genre. One can only wish that Hollywood filmmaking today might take this little gem as a model, allowing even the “uninvited” subjects through its doors. For isn’t that the way of life?


Los Angeles, Halloween 2013
Posted by greenintegerblog at 9:40 AM