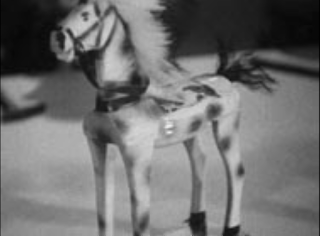 We begin in prison, with prisoners on an assembly line creating toy horses. For the first few moments there is almost something charming about this, as certain prisoners apply paint and others put in the legs of the nearly magical beasts. But as the bored supervisors watch, with one of the two central prisoners, Louis (Raymond Cordy) and Ėmile (Henri Marchand) slipping a working tool into their prison-issued shoes, we recognize this “work” as forced labor in stark contrast to the song they sing they whistle while they work:

Liberty is the happy man’s due

He enjoys love and skies of blue

But then there are some

Who no worse crimes have done

It’s a sad story we tell

From a prison cell

A sad story indeed, reiterated by the regimented meal they must consume after working throughout the day. Pretending to sleep, the two cell mates saw through their cell window, Ėmile cutting his finger in the process. Gently, with apparent kindness and love, Louis takes out a handkerchief to mend the wound, and the two successfully leap to a retaining space. They have only one more wall to climb, which Louis quickly succeeds in doing, but the sudden sound of a siren, the appearance of guards, and Ėmile’s shorter stature, leaves him behind, as he throws his rope over the wall to further help his comrade escape. 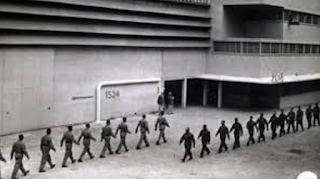 The comic interlude that follows is as good or better as anything Chaplin, one of Clair’s favorite filmmakers, might have created, as the escaped prisoner accidentally knocks a bicyclist participating in a bicycle race off his vehicle, himself racing on the bike—mostly to escape the police—over the finishing line to win the race.

Louis, in fact, quickly appears to be a winner, successfully robbing a local store, and, after finding temporary employment in a record store, becoming a wealthy industrialist who owns several factories that produce phonograph players.

Although Louis has achieved wealth, his workers are even worse off than the prisoners on the assembly line, as Clair, combining images  reminding one of Fritz Lang’s Metropolis of five years previous with humorous factory scenes that Chaplin would openly steal in his Modern Times, which premiered five years later. So similar are the worlds of the prison and in the factory—where a Guard, noticing a slacker, shouts: “Not at work? Don’t you know that….” To which the factory worker answers “…work is mandatory. Because work means liberty”—that, in hindsight, we only link it with the German-inspired phrase, “Arbeit macht frei,” which cynically greeted prisoners and Jews to the concentration camps of Auschwitz, Sachsenhausen, Theresienstadt, Dauchau, and other notorious institutions of death only two years after Clair’s comic film. 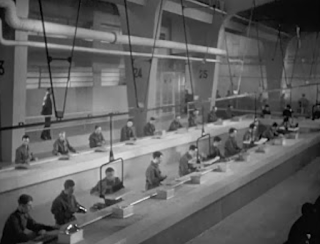 Work in this world not only does not result in “liberty,” but enslaves the willing participants and the factory owners alike. Suddenly freed from imprisonment, Ėmile, resting peacefully in the countryside, is roused by the police and forced into labor as if he had never left his cell. Like Chaplin’s tramp, he fouls up the well-oiled machine, intruding upon another worker’s space as he has missed the opportunity to screw into the phonograph a needed bolt, causing a near riot, as, bothered by Ėmile’s intrusion into his space, the second also is unable to accomplish his task, the third, the fourth and so on, until the entire factory breaks down in the process.

Ėmile also bollixes up the factory hierarchy by falling quickly in love with the manager’s niece, Jeanne, leading, after a couple of attempted meetings with the girl, to another chase which ends with an encounter with the owner—his former prison mate! Fearing blackmail, Louis tries to offer him money, which the honest Ėmile refuses, shaming his former comrade. 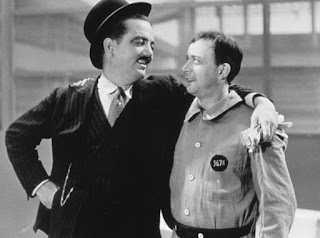 Before long, the two, winking at each other, return to what apparently were their habitual  “games” back in prison: pushing, shoving, wrestling, and touching one another as if they were two child-like schoolboys—almost adolescent lovers. To placate his conscience, Louis invites Ėmile to a dinner party that evening, which, because of the servants’ incompetence, results in a ridiculous free-for-all, forcing his haughty and “shocked” visitors to leave in disgust. His wife, Maud, kisses her secret lover goodnight at the door, promising she will leave with him the next morning.

Relieved by the mass exit of his guests, Louis joyfully dances with Ėmile, while sending a missile of a wine bottle into his own portrait, clearly demonstrating his disgust of his current life.

Equally delighted by his wife’s morning departure, Louis does not recognize an ex-prisoner in the street, a man who, however, perceives him. More comic events follow, including Louis’ attempt to marry off Ėmile to Jeanne and a group of gangsters’ (all ex-prisoners) attempt to “out” Louis as a former prisoner. Gang members chase Louis (who has gathered all his savings in a suitcase) and cops chase behind—again demonstrating Clair’s love of Mack Sennett, Chaplin and Keaton shorts—which all ends where we know it must: with the two “comrades” taking once more to the road, enjoying each other in their simple roles as vagabonds more than the world of work and regimentation.

In the end, Clair reveals that these two can be free only without the societal pressures. The light-hearted songs the men and others sing throughout are all lies. The true joy exists in their camaraderie and idleness. Obviously, the “liberty” which these men were original seeking, their freedom from jail, also came to encompass freedom from the strictures of patriarchal duties which both Louis and Ėmile have attempted to emulate, Louis more successfully than his friend. But by the end of this “buddy” film the “willing” reader also recognizes that that the “liberty” these men seek is an escape from the more specific heteronormative imprisonments of marriage and heterosexual sex. And in that sense, this film bears an odd relationship—almost serving as a solution to—the relationship between the two developed in the prison as played out quite differently in William Dieterlie’s movie, Sex in Chains of three years earlier as well as presaging Robert Bresson’s A Man Escaped (1956). 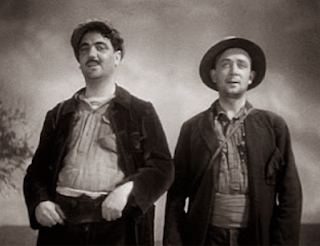 Given the more coded issues and very obvious social issues that were occurring throughout Europe at the moment of Clair’s farce, his work may have been far more radical than Clair even intended it. For only a few years later these two would surely have arrested for vagrancy, imprisoned, overworked and, perhaps, killed. But for an idyllic moment this Flaubertian, Beckettian, and Laurel and Hardy-like couple, for once in their lives, were truly free, of which Ėmile reminds his partner with a good, swift kick in the pants. If Clair’s film, so beloved in its day, has lost its significance as the years have passed, it is only because the horrors of World War II could no longer permit theater-goers to laugh at the absurd logic behind the terror that would follow.